Yuengling partners with competitor to extend its reach

A joint venture with another player in your industry can have a high payoff — if you approach it in the right way. 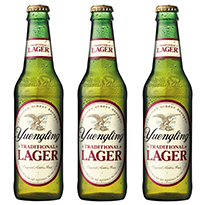 D.G. Yuengling & Son Inc., the 191-year-old family-owned brewer based in Pottsville, Pa., has entered into a joint venture with Molson Coors Beverage Company to brew Yuengling beers for distribution beyond Yuengling’s current 22-state footprint. Molson Coors is a public company controlled by the Molson and Coors families.

The joint venture, expected to begin in the second half of 2021, will oversee Yuengling products’ market expansion beyond those 22 states plus any future New England expansion. It will be governed by a board of directors consisting evenly of Yuengling and Molson Coors family members and executives, the companies said in announcing the partnership in mid-September.

D.G. Yuengling & Son will remain owned by the Yuengling family, and the existing company will operate separately from the joint venture with Molson Coors.

Yuengling and Molson Coors personnel will work together at Molson Coors' facilities to brew and distribute Yuengling products.

Partnering with a competitor can be a good strategic move if carefully thought through, says Caleb White, a director of his family’s business, Ensign-Bickford Industries Inc., and its former president and CEO. White is currently a principal at CFAR, a consulting firm that advises family and other businesses.

Competitors often join forces to help each other over regulatory or compliance hurdles, White says. Another reason to partner up, as in the Yuengling-Molson Coors alliance, is “when you have something that’s potentially huge growth and huge popularity, and you’re trying to scale it in the right moment.”

The brewers’ joint venture will enable Yuengling to use the infrastructure of a large public company to take its beers to the West. Molson Coors, meanwhile, will leverage that infrastructure, which has likely been underutilized, and stands to benefit from the popularity of Yuengling’s brand, he says.

Look before you leap

Care must be taken in designing these partnerships, White says. Like an engaged couple pondering a prenuptial agreement, as the parties are planning to join together, they must envision what could happen to break them apart.

“You need to be sort of planning for it not to work,” White says. “And if it's not going to work, what are the things that you want to make sure have not ended up in your competitors’ hands to be used in a way that's actually going to hurt your franchise on a longer-term basis?”

Companies must ensure the agreement protects their intellectual property pertaining to the products and their propriety processes (which may be a competitive advantage but may not be patentable). They also must take steps to ensure their partner doesn’t poach their key people, he says.

While the announcement of the Yuengling-Molson Coors joint venture stressed that Yuengling would continue as a family business, such partnerships can be a way for two parties to assess the possibility of a sale, White notes.

The brewers’ arrangement enables the Yuengling family to test out a working relationship with the Molson and Coors families, and vice versa, particularly from a fit and culture standpoint, he says. The Yuenglings will get a taste of what it might be like to have their brand owned by a large, publicly traded company, whether or not they would ever think of selling.

Additionally, White says, everyone will learn if Yuengling’s brand, a regional favorite, can be scaled “without ruining the magic.”

The joint venture will show whether restaurants and bars out West are willing to swap out a Western regional brew for Yuengling.

“As a family business, you’ve got to be thinking about the drivers and the priorities and the timings of the partner you’re getting into bed with,” White says.

Private family-owned companies like Yuengling tend to take a longer-term view than public companies like Molson Coors, which manage quarter to quarter, he notes.

In 2003, Ensign Bickford entered into a joint venture with Oslo, Norway-based explosive manufacturer Dyno Nobel. The two companies merged their commercial explosives initiation businesses under the Dyno Nobel banner. For Ensign Bickford, the partnership was a first step in exiting the sector, where it had operated since the company’s founding in 1836. Dyno Nobel was predominantly owned by a European private equity firm, Industri Kapital.

“We put on the whiteboard as we were thinking about it, ‘They’ll probably want to exit in three to seven years. Are we comfortable with that?’ ” White says. “And thankfully, we did move forward with the JV.”

The combined entity, in which Ensign Bickford had an interest of approximately 25%, enjoyed strong performance, and after only 2½ years the timing was right for a sale. In October 2005, a consortium led by investment bank Macquarie Bank Ltd. acquired Dyno Nobel for about $1.7 billion. In turn, it sold part of Dyno Nobel to Orica Ltd., an explosives and chemicals group, for $685 million.

“It was an incredibly successful sale to another strategic partnership,” White says.

Partnering with a competitor can be a fruitful way for a family firm to achieve its strategic objectives — if the family approaches the joint venture in the right way, White advises.

“It’s all based on trust. But there definitely needs to be a sense of ‘trust, but verify.’ ”