A vibrant scene, a vibrant community 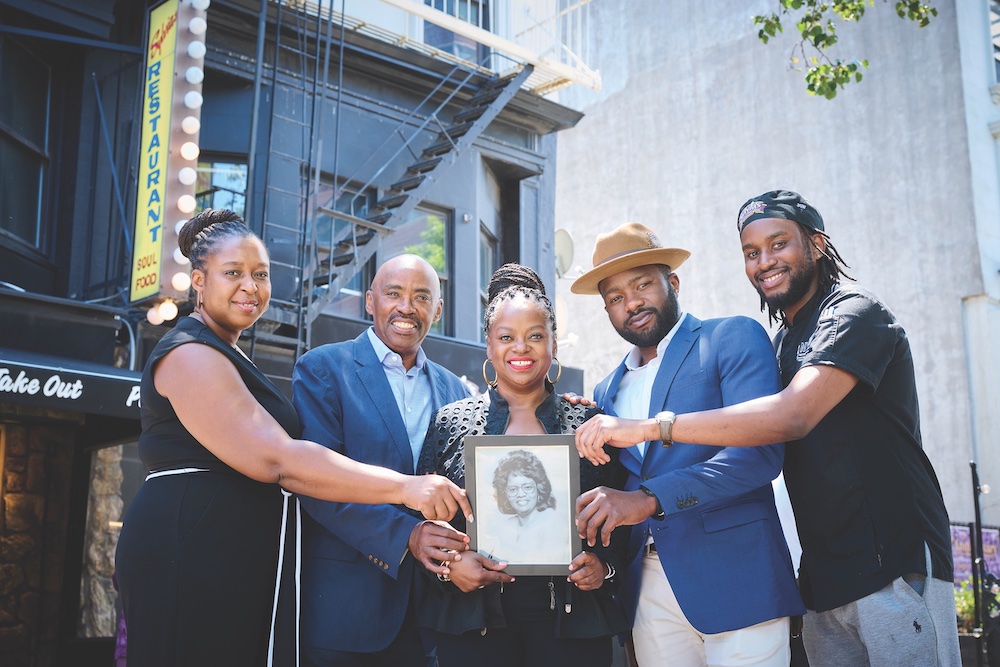 At the top of Manhattan, above Central Park, near the corner of West 126th Street and Malcolm X. Boulevard, the heart of Harlem is bustling with life.

A Dodge Charger zips north, blasting Tupac out the windows. A panhandler begs for money or food.

This vibrant scene, this cross-section of humanity, is a perfect representation of the different facets of one of New York’s must storied neighborhoods. It’s no wonder that a sign on the nearest lamppost indicates the action is unfolding on a section of concrete named Sylvia P. Woods Way.

Sylvia Woods, the “Queen of Soul Food” who died in 2012 at the age of 86, was an icon in these parts — the matriarch of a family, the founder of a food empire and the face of a neighborhood.

She was active in the church. She was a philanthropist. She knew everybody, and everybody knew her.

Sylvia was perhaps best renowned for her eponymous Sylvia’s Restaurant, which she opened in 1962. Her family risked just about everything to open the restaurant — literally, they mortgaged their farm. The gamble paid off. Since a glowing review in New York magazine in the 1980s, the eatery has flourished and expanded over the years; it continues to serve fried chicken, ribs, collard greens, cornbread and other delicious soul food with the same recipes from the very beginning.

Though Sylvia is gone, her children and their children now run the restaurant, carrying on the family business and preserving Sylvia’s legacy for the future. Kenneth Woods, her son, serves as chairman and president of the family business. He says his mother made it easy for the next generation to carry the torch.

“Everything she did, she did with dignity, charisma and grace,” Kenneth says. “She worked hard and talked to everyone like they mattered. These remain the things we strive to achieve here every day.”

“Mommy would always say, ‘If you don’t love people, this is not the job for you,’ and I think she meant that in her soul,” said Crizette, who also serves as controller. “She also loved making people happy. If she walked through the dining room and someone didn’t seem pleased, she’d come over and do whatever she could to make it right. She was the same in the community, and in return they loved her for it.”

The story of Sylvia Woods is everywhere at Sylvia’s Restaurant: in the menus, on the walls and as part of the conversations that servers start when they come by to take orders.

The narrative is as much a part of the experience as the hot sauce.

Sylvia grew up the daughter of a widow in segregated South Carolina, toiling away on her family’s farm in Hemingway. Like many, she came to New York for a better life — she had been a hairdresser in her hometown but wanted more. Also, she and her husband, Herbert Woods, wanted to escape the prejudice of the South. They arrived in Harlem in 1944.

Sylvia knew how to cook — her mother and grandmother had taught her — so after a few years of working factory jobs in Brooklyn, she sought a job at a restaurant.

Her first gig: waitress at Johnson’s Luncheonette on Lenox Avenue and West 127th Street. Woods was a hard worker, always going beyond what was asked. She often was the first one there in the morning and the last one to lock the door at night.

Sylvia had worked several years at Johnson’s, and the owner, Andrew Johnson, wanted to move upstate and open another business, so he asked her if she wanted to take over the restaurant. Of course, she did. Sylvia convinced her mother to mortgage the family farm in South Carolina, and she used the collateral to buy the restaurant. Sylvia’s restaurant was born.

The move was quite a gamble — Sylvia’s mother believed so strongly in her own child that she was willing to risk everything to pave the way for success.

According to Tren’ness Woods-Black, Kenneth’s daughter who now serves as “queen of hospitality,” her grandmother’s entrepreneurialism was significant for another reason — in 1962, it was practically unheard of for a Black woman to step out and start a business completely on her own.

“My whole life, I always have known and understood that Black women were these superheroes in a way, amazing multitaskers,” Woods-Black says. “The ability to take care of their families, build business, build community. That’s all I’ve ever seen, and that example has inspired me to become the person I am today.”

That first iteration of Sylvia’s Restaurant was small — 15 stools and six booths.

The restaurant changed addresses in those early years, moving from one space to another as Sylvia got her bearings and the restaurant grew.

Kenneth says his mother was always saving money, and she quickly figured out how to make the most out of every dollar earned.

“She had this unusual way of always being able to budget for everything,” Kenneth remembers. “She had no financial degree, but she could have gone to Harvard.”

Eventually, Sylvia bought most of the stores on the block. Sylvia’s restaurant expanded to fill the space.

Over time, Sylvia’s restaurant became a gathering place for African-American luminaries such as Aretha Franklin, the Rev. Jesse Jackson, Denzel Washington and Jay-Z. That New York magazine review in the early 1980s brought white customers in droves, too — despite the plethora of dining options across the metropolitan area, it seemed everyone wanted a taste of the best soul food in New York.

Sunday brunch was always a big event at Sylvia’s restaurant, as many members of the local community would come straight from church. This meant a dining room full of customers wearing their Sunday best.

This reporter frequented the restaurant in the late 1990s and two things were always certain: (1) Everyone left full, and (2) Sylvia was always patrolling the dining room floor, introducing herself, interacting with guests, making diners feel at home.

“The essence of Sylvia’s restaurant always has been one of welcoming, love and appreciation,” says McFadden, to whom Sylvia was a great-aunt. “You came in and you were coming into Sylvia’s house. She treated you as if you were dining at her kitchen table, communicating with you and talking to you as if you were in her home. This was who she was. For all of us.”

Making a difference in the community

It’s also a hotspot of philanthropy. Two of Sylvia’s favorite sayings were, “You can’t beat me giving,” and “A closed hand doesn’t work for me,” and in 2001, the Woods family created the Sylvia and Herbert Woods Scholarship Fund. To date, the fund has awarded more than $500,000 in college scholarships to more than 150 students from Harlem and surrounding communities. The Woods family also has offered emotional and mentoring support to the students for the duration of their college life and beyond.

(The kids say these non-monetary efforts embody a third Sylvia slogan: “Each one, teach one.”)

As part of her effort to be queen of hospitality, Woods-Black represents Sylvia Woods, Inc., on eight different nonprofit boards across New York City.

She is culinary co-chair for NYC & Company, the Big Apple’s official marketing, tourism and partnership organization. She is one of the executive board members for the New York City Hospitality Alliance. She also represents the culinary industry on the board of directors at the She Can Foundation, which supports women-owned businesses.

“I strive to make sure we are always a symbol of success for Harlem,” Woods-Black says. “That’s how I embody my grandmother.”

The Sylvia Woods legacy of kindness lives on in other subtle ways, too. On a recent summer night, several members of the neighborhood’s unhoused community came by the restaurant around closing time seeking leftovers. Without hesitation, employees doled out items until the stash was gone.

Family always has been a part of the equation at Sylvia’s Restaurant — Sylvia herself said family was a key motivator.

Gradually, as Sylvia aged, her children took over different parts of the business. Kenneth became president. Crizette took over HR. Van, another brother, has managed real estate acquisitions. Grandkids got into the mix, too: De’Sean Woods, Kenneth’s son, now serves as CEO; Woods-Black, De’Sean’s sister, manages the company’s relationships with guests and the community.

When Sylvia Woods died in 2012, a succession plan was already in place. Though everyone in the company felt her loss acutely, though her absence in the dining room was noticeable, the business was able to continue uninterrupted.

“We’ve carried on, but sometimes we still can’t do everything she did,” Kenneth jokes respectfully.

One thing the younger generations have been able to do: grow the empire. The parent company of Sylvia Woods, Inc., now comprises the restaurant, a full-service catering hall down the street, Sylvia’s Catering and Special Events division, a nationwide line of Sylvia’s food products and a real estate holding company.

Today, whenever a new employee joins the team, that person is required to watch a 15-minute video composed of news and interview clips from the 1970s, 1980s and 1990s — snippets that tell the Sylvia Woods story from beginning to end. It unfolds like a short documentary film.

The Woods children and grandchildren put together the video to make sure new employees who didn’t know Sylvia in person can understand the passion and charisma that made her so special.

Sylvia appears so many times in the video, it’s almost as if she’s still alive.

For Woods-Black, her grandmother’s legacy, coupled with the cultural legacy of soul food, keeps the past current.

“Soul food is one of the most important cultural identity markers for Black Americans,” she says. “The recipes, the ingredients, the communal feeling, the accessibility — all of that is part of a tradition we were able to maintain even through the Middle Passage and the other great migration from the South to the North.”

After surviving the Covid-19 pandemic (and enduring major renovations in the restaurant during most of 2021), the younger generation is primed to take the Sylvia Woods legacy to new heights.

McFadden says Sylvia Woods, Inc., has been looking at opportunities to expand the restaurant with other locations in the United States and abroad. She adds that the parent company also has kicked tires on adding more SKUs at the food products company. Even the real estate company is growing, with new development projects in the works for 2023 and beyond.

The year 2022 marks De’Sean’s first year as CEO. At press time, he said he was looking forward to kicking off a 60th anniversary celebration on August 1 that will last the entire year. De’Sean says that when he thinks about the future, he tries to see it as his grandmother would have: with growth, but also with humility.

“I won’t be here 60 years from now, but I’ve got to approach it the way Sylvia did and focus on what I can do now to make sure our family’s legacy lives on,” he says. “There aren’t many places like this one left in the world, and there certainly aren’t many businesses that are as closely connected to the community as ours. That means it’s even more important for us to do what we can to keep it going. The way we see it, we’re not just maintaining a restaurant and a business. We’re keeping a culture alive.”  nFB

Matt Villano is a writer and editor in Healdsburg, Calif. Learn more about him at whalehead.com.