Vertex is the leading indirect tax software and services provider to U.S. and global businesses of all sizes. Vertex provides cloud-based and on-premise solutions that can be tailored to specific industries and business 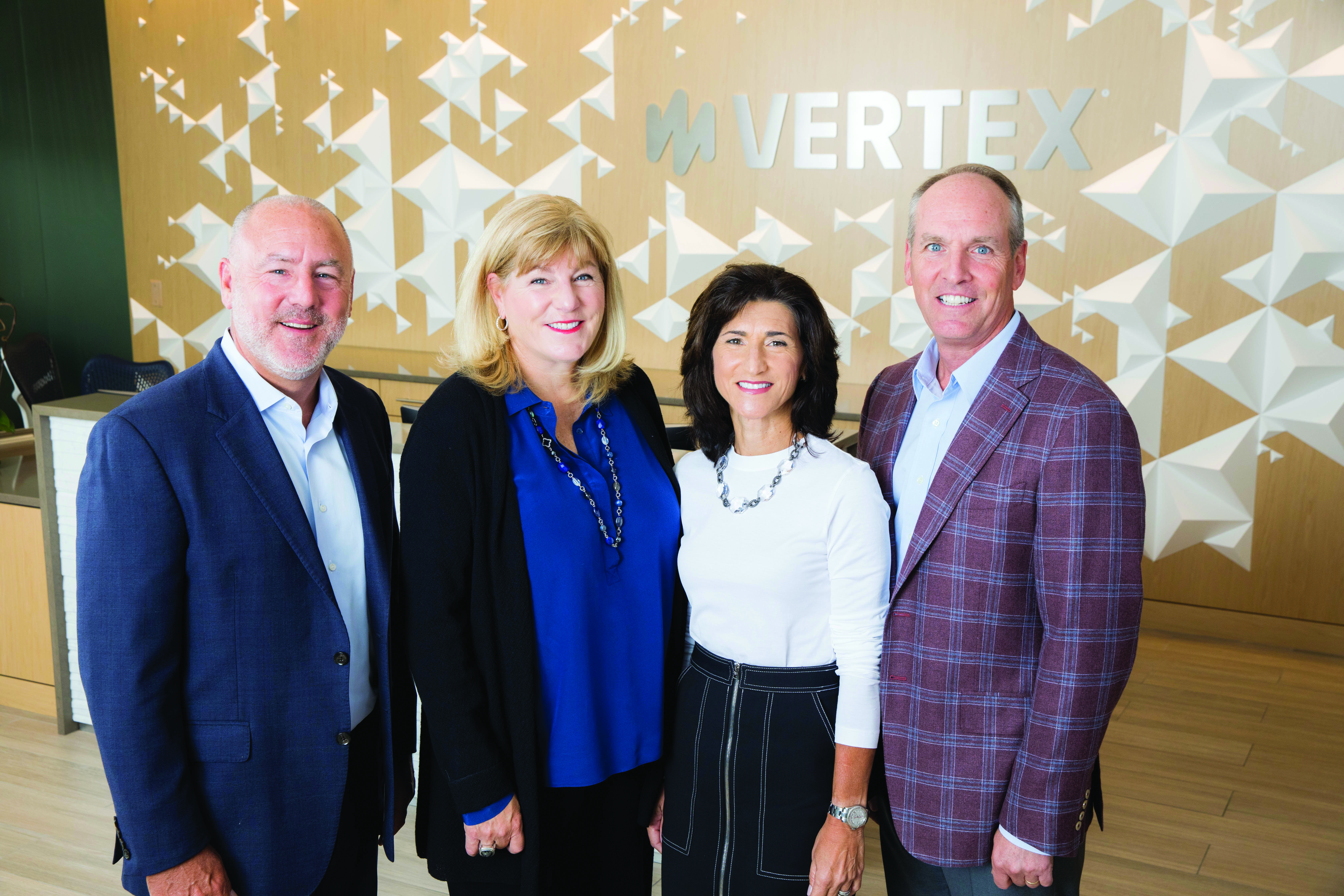 requirements for every major line of indirect tax, including sales and consumer use, value added and payroll.

Headquartered in King of Prussia, Pa., and with offices worldwide, Vertex is a privately held company co-owned by three second-generation siblings and employs over 1,000 professionals.

Ray Westphal founded Vertex in 1978. His wife, Antoinette, who passed away from breast cancer in 2004, was the first employee. In its early years, the company sold paper copies of sales tax directories and manuals, including information on the country’s many tax jurisdictions, rates and rules.

The three sibling co-owners — Jeff Westphal, Stevie Westphal Thompson and Amanda Westphal Radcliffe — purchased their father’s interest in the company in 2000, when all were in their 30s. At the time of the purchase, their father was principally devoted to spending time with their mother, who helped to found breast­can­­cer.org, a non-profit that is still one of four supported by the Vertex Corporate Philanthropy Program.

The ownership may have shifted down a generation, but the commitment to build upon the strong values on which the company was founded and the desire to grow it exponentially remain. Ray and Antoinette continue to be the inspiration for the company’s ongoing spirit of devotion to its values, vision and mission.

Before 2000, the board consisted of Ray and Antoinette Westphal, their three children and the corporate attorney. After assuming ownership, the second-generation partners recruited independent directors with public, large-cap experience to their private, mid-cap company, offering market-value-based compensation. The Westphal siblings agree the independent board was vital to their successful transition to co-ownership of the company.

All three siblings have worked at Vertex in various roles, including sales, marketing, finance and customer service. Jeff, who joined the company in 1988, became president in 1996 and then CEO in 2000. During his tenure, Jeff oversaw tenfold growth of the company, creating new divisions and service offerings while expanding the business globally. He led the initiative to add cloud-based tax processing solutions for smaller corporations and helped lay the foundation for the company’s tax data management offering.

Having helped to establish Vertex as an industry leader, and realizing that 20 years at the helm was fast approaching, Jeff recognized that it was time for new leadership with the right skills and strengths to take the company to the next level and offer sustainable long-term industry domination as a fully globalized corporation.

While Stevie continued to guide the board in the role of chair, Amanda led the succession planning process, working closely with the original independent directors. A global executive search and consulting firm was selected to advise the board along a carefully staged five-year process to cultivate, select and support not only a successor, but also a thorough company leadership elevation and mentorship program.

David DeStefano, who joined Vertex as vice president of finance in 1999 and later became chief financial officer and executive vice president, was announced as Jeff’s successor in late 2015. After a year of gradual transition, he assumed full responsibility in the fall of 2016.

While the Westphals aren’t involved with the daily operations of the company, Vertex continues to be family-owned and professionally run. DeStefano’s commitment to the people-centered culture and emphasis on the core values of respect and fun were key factors in his selection, along with his strong financial acumen, leadership ability and competitive drive for performance.

Today, the Westphal siblings concentrate on corporate and family business governance, devoting much time to both. They serve together on the board along with four independent directors. The five non-family board members, including DeStefano, can outvote the three family directors on board decisions.

The siblings say the best thing they did for their partnership, company and family was to develop an independent board. The board meets five times a year and maintains public company fiduciary standards. It includes very active audit, compensation, and nominating and governance committees, chaired by independent directors. The directors played a key role in mentoring DeStefano, as well as over a dozen other senior executives at the company. And, most importantly, the independent board ensures that deliberations are objectively focused on the business.

In 2008, the three sibling families formed a family council, whimsically named KAFCA (Kick-Ass Family Council Assembly). KAFCA participation is voluntary and includes all willing family members. There are two assemblies per year, with other meetings conducted among various subcommittees, including a private call each month for third-generation members who share in ownership now through trusts. In addition to company and industry education, skill development and various family business governance projects, a formal family employment policy has been developed, and some members of the third generation are considering the possibility of applying to the firm for employment.

At 57, 56 and 51, the Westphal siblings continue to position the company for long-term industry leadership, while patiently supporting the development of the next generation as competent future stewards of the business. The partners are proud to sustain a company that serves their customers with mission-critical enabling technology and provides Vertex colleagues with an extraordinary workplace that supports communities, causes and families in fulfilling ways.