Sure, you’ve heard of making lemonade out of lemons. How about making skincare products out of plums?

The Taylor family in California is doing just that. Fourth-generation sisters Jacqueline, Allison and Elaine Taylor wanted to join plum grower Taylor Brothers Farms, but their interests stretched beyond marketing the produce itself. 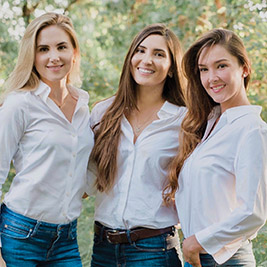 All three sisters (the youngest, Elaine, is not currently working full-time in the business, but is “definitely involved”) spent time working with their dad. They thought they could do something more with plums.

“We really wanted to find a way to work together and to diversify the family business,” Jacqueline says.

“Jacqueline had a strong hunch that there was something in the oil — how powerful it was,” Allison continues. “That was the direction we wanted to take [the business].”

Jacqueline, who suffered from acne as a teen, had always been interested in skincare. Elaine struggled with eczema.
Jacqueline, who had intended to pursue dermatology at UCLA, did an internship at an oral/maxillofacial practice. She was able to discover how plum oil helps the skin.

“It’s not an ‘FDA approved’ sunscreen, but in combination with a current routine, it protects the outermost layer of skin,” she says. “You combine it with your foundation or concealer, and it protects.”

“It’s not anti-aging,” Allison adds. “It’s fortifying the barrier in your skin so you don’t run into those [aging] issues.”

Additionally, the oil doesn’t clog pores or increase breakouts, Jacqueline says. Elaine believes it has calmed her eczema. The company hopes to get the National Eczema Association’s Seal of Acceptance by the summer.

The sisters did extensive clinical testing before presenting their plans to their father, Richard Taylor, who owns the company with his brother, John Taylor.

“We went to our dad and he said, ‘Well, I want to see a business plan,’” says Jacqueline. “I said, ‘OK’ and put together a business plan, including information about the cosmetic market and how it has grown.

“I really had to convince him on it — cosmetics was not his field,” she recalls with a laugh.

“Most of the people in the prune industry are males,” Allison notes. Male prune growers aren’t apt to consider the fruit’s potential as a cosmetic product, she adds.

But now Richard is a true believer in the oil, the sisters say.

“He uses it all the time,” Allison says. “I tell him, ‘Dad, you should be the poster child for the product.” 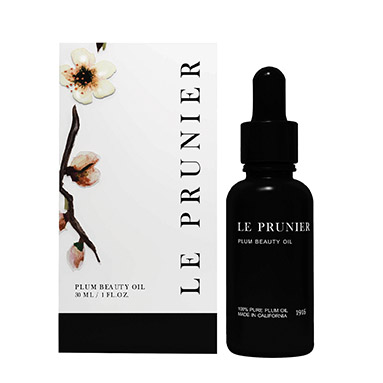 But the fruit-growing business is sweet. For more than 100 years, the family has grown plums, cherries, watermelon, cantaloupe and walnuts. Over the last 30 years, Richard and John Taylor have narrowed the crops to plums (prunes) and walnuts. The farms have also shifted to organic growing practices.

The plums sell well around the world, especially in Asia and Europe. The farm produces 6,000 tons of dried plums a year and claims to be the largest producer of organic plums in the world. Of that, 10% is used for the oil, Jacqueline says.

The product can be found in Credo Beauty, Anthropologie and Neiman Marcus stores around the country, with new accounts in the works.

The next step for the ranch is yet unknown. The women know they always want to be a part of the family business, but aren’t sure if they will run the growing business itself. For now, they are satisfied with the cosmetics offshoot.

“We’re still figuring out [succession],” Allison says. “So much of what we do is contingent upon the farm and depends on the farm. Even if our dad retired, I would feel very uncomfortable if something happened to the farm.”

At 65, Richard has no plans for retirement in the near future, his daughters say. They have cousins — John’s children — who could take up the mantle of growing.

“We’re in a good position,” says Allison. “Whether our generation will [take over] control of the business — we shall see.”