Thinking Outside the Box: One Family’s Non-Linear Family Entrepreneurship Journey

Do “family entrepreneurship” and “family business” mean the same thing to you? 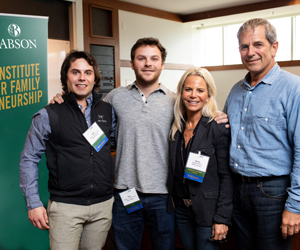 In reality, family business is only a component of the broader realm of family entrepreneurship. To put it simply, family entrepreneurship is the process by which a family’s entrepreneurial legacy leads to creating economic, social, and family value across generations. It’s about understanding how to amplify the power of this legacy over time, creating value through start-ups, transforming and growing legacy businesses, founding social ventures, and launching philanthropic endeavors.

This is very different from the traditional, linear view of family business succession where the focus is primarily on transferring the business from one generation to the next. Family entrepreneurship creates the capacity for the older generation’s entrepreneurial legacy to extend in new directions that tap into the vision and passions of the younger generation. It could be about growing the legacy business, but it could also be starting an entirely new business. It could be establishing a charitable foundation, or, it could transform the current business model into something entirely new.

Consider the Barber family. For three generations, this Maine family has evolved their business from a small butcher shop to become a national food industry leader. Recently, the third generation has extended the business with successful start-ups in the food truck, restaurant, and catering sectors.

Barber Foods was founded by Gus Barber as Barber Beef and Poultry in 1955. A first generation American of Armenian descent, Gus and his wife Marjorie opened a butcher shop in Portland, Maine. Early on, Gus saw a need for innovation. Working with restaurants, he started to portion control chicken breasts in the 1960s. Recognizing an opportunity, Gus breaded the leftover chicken trimmings that were piling up and created a chicken nugget in 1967, long before chains made it a menu mainstay.

Fast forward to 1971. While visiting a Texas grocery store, Gus saw a stuffed potato and was inspired to create a stuffed chicken breast. He returned to the family kitchen, made stuffing from what was in the pantry, and asked Marjorie, “What do you think?” The company changed its name to Barber Foods and brought stuffed chicken breasts to the market.

Although the business grew rapidly, Gus never lost sight of his priorities. Being an immigrant himself, Gus believed in giving back, and that helping others get started in a new land would benefit not only the individuals, but also the community and the company. Barber Foods was a major employer among the immigrant community and regularly offered English language and citizenship classes to its employees. Over the years, Barber Foods has employed immigrants from more than 50 countries.

Gus and Marjorie’s son David Barber grew up in the business, alongside his three siblings. David received his first paycheck at the age of 12 and rose through the ranks from deboning chickens, to operations and sales, eventually serving as President and CEO. As the industry began rapidly consolidating in the 2000s, David led the 2011 sale of Barber Foods to AdvancePierre Foods, which was subsequently acquired by Tyson in 2017. Today, he carries on his father’s legacy, consulting for Barber Foods as it maintains its place as the market leader of premium stuffed chicken breasts sold in retail grocery stores, clubs, and foodservice channels throughout the US and Canada.

David and his wife Dorie are the parents of two sons, Jack and Max. Together, the brothers have brought the Barber Foods legacy into the 21st century. Dorie comes from a wholesale family bakery business in Ohio, and like their parents, Jack and Max grew up surrounded by the business of food. They inherited an entrepreneurial spirit and a love of their home state, Maine. During Jack’s freshman year at Babson College in 2012, he launched Mainely Burgers as a fledgling food truck business serving up burgers and fries at a local Maine beach. Max, a high school junior, joined the business and with support from their parents, the business quickly took off.

Today, Mainely Burgers operates three food trucks in the greater Portland, Maine area and two restaurants in greater Boston. Mainely Sips, a fully catered bar on wheels, will be the team’s next expansion. The third generation Barbers have stayed true to their grandfather’s belief in bringing people together and cultivating a positive work environment.

While Jack and Max are the ones running the business now, you might find Dorie and David as fill-ins when staffing is short. The family works well together both in and outside of the business. According to Jack and Max, “We’re good at different things. We can be critical and brutally honest with each other, but at the end of the day, we wouldn’t be doing this if it jeopardized our relationship.”

The Barber family’s non-linear path not only created economic value, but also social and family value, while allowing each family member to pursue their personal goals. The family’s entrepreneurship has evolved, strengthening the Barber family in the process.

Lauri Union is the Executive Director at the Institute for Family Entrepreneurship at Babson College, and has extensive experience both in family business leadership and entrepreneurship through organizational transformation.