Their cup runneth over

They call the Kentucky Derby “The Run for the Roses,” but the winner gets more than a rose garland and a sizable check at the end of the famous horse race. The owner of the winning horse receives a nearly 2-foot-tall gold trophy.

The trophy was first awarded in 1924, the 50th anniversary of the race. Since that time, just a handful of people have worked on its creation. For 43 years, a single family has been entrusted with making it. 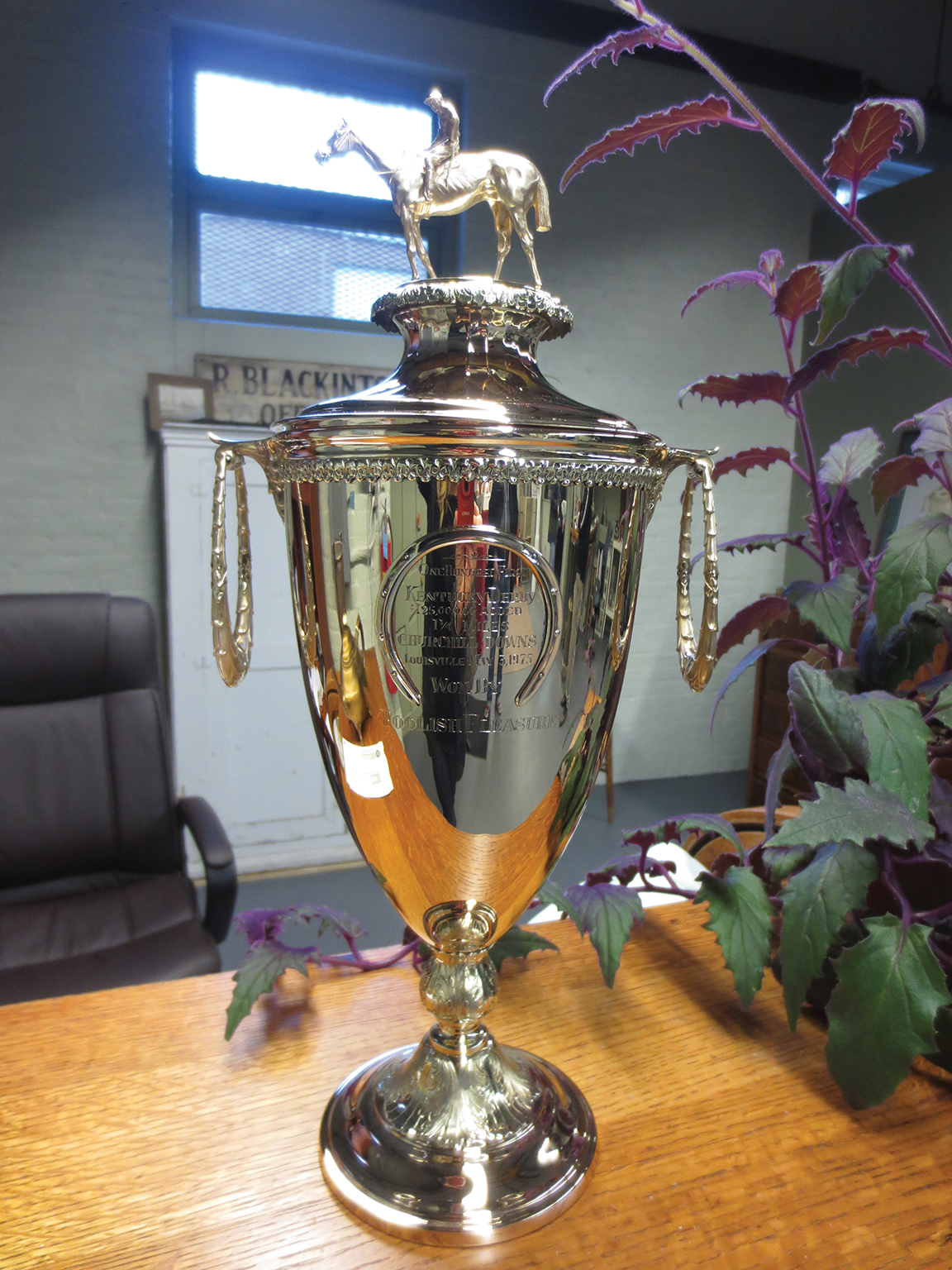 Ross Blackinton originally got the job for his company, New England Sterling, an impressive feat for what was then a young company with a tiny staff.

Ross followed in the footsteps of three generations of silversmiths, starting with his great-grandfather Roswell Blackinton. Roswell taught himself after serving in the Civil War. He established R. Blackinton Company in 1862.

When Ross’s father took over the business, Ross entered and found greater interest in the business side of the company. His father sold the business in the mid-1960s. Soon afterward, Ross established his own firm, New England Sterling.

He started as more of a middleman, farming out the spinning and silversmith work, but when he acquired the New York company contracted to make the Kentucky Derby Trophy for Louisville-based jeweler Lemon & Son, Ross was ready for the challenge.

“All the big companies were all, ‘You’re not ready for that,’ “ says Ross’ daughter, Susanne Blackinton-Juaire. “And he was like, ‘Oh yeah?’ “

To prove the naysayers wrong, Ross hired a silversmith, Walter Bigos. Bigos found a spinner, and the company created its first trophy for the Derby in 1975.

In interviews, Ross and Bigos shared some of their early adventures with the trophy. The first year they made it, Ross took it to his golf club, had it filled with beer and passed it around the room so everyone could have a sip.

“That was the last time we did that,” Ross said in the interview with a Louisville, Ky., television station in 2016.

Bigos, who passed about two years ago, said he would keep the trophy next to his bed, except for once when he kept it in his oven.

Crafting the Derby Trophy raised the company’s profile. The trainer, jockey and breeder of the Derby-winning horse each receive silver half-size replicas of the big gold trophy. Blackinton makes all four.

As New England Silverworks grew, Susanne was growing up around the business. She was in awe of the silversmiths and spinners and dreamed of one day creating the trophy.

But her parents had a different plan. They wanted her to be the first one in the family to attend college.

After switching her major from communications to art therapy, Susanne wrote her father a letter, telling him she was wasting her parents’ money in college and that she wanted to work with her hands and become a silversmith.

“I think he understood. And he had four other kids who could go to college,” she says. Susanne started by paying her dues in the pressroom and packing trophies for shipment. She was the first woman in five generations to follow the silversmithing trade.

Bigos was Susanne’s mentor. She refers to him as her greatest inspiration and a father figure whom she hopes to emulate. 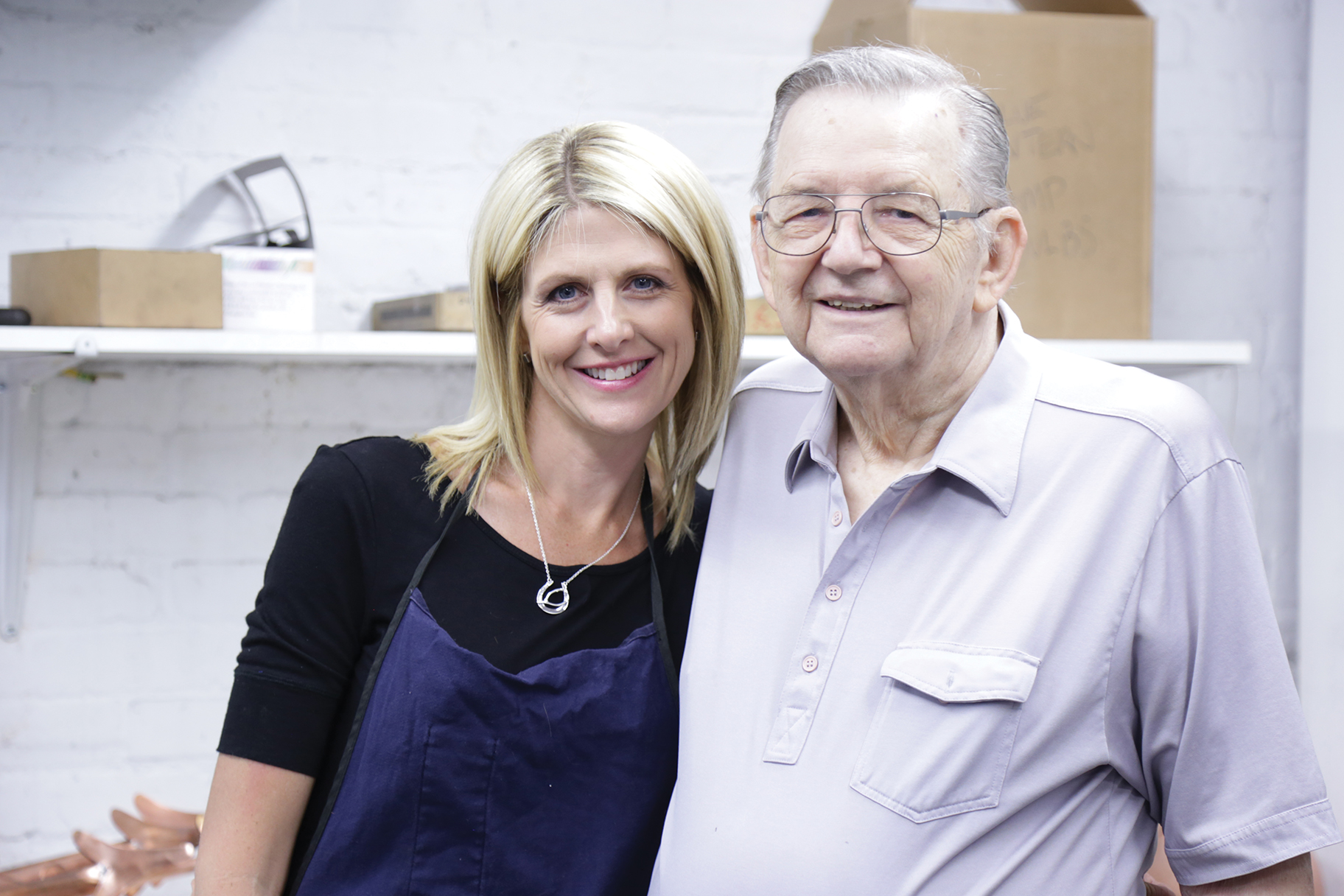 Bigos was there not only to witness Susanne’s success in the trade, but also to see her meet and marry her husband, Bill Juaire, who was a spinner at the Silverworks. Susanne, Juaire and Bigos worked as the company’s “hollow goods” division in their own shop. As a spinner, Juaire is the artisan who creates the bowl, pedestal and other non-sculpted parts of the trophy.

Ross sold New England Silverworks in the ’90s. Around 2000, Susanne went to work with her husband at his newly established business, New England Copperworks. They were contracted by the new Silverworks owners for the annual job of building the trophy. During Ross’ and Bigos’ time with the trophy, they worked to make the horse look more like a thoroughbred, with long legs and a longer neck. Now, Susanne sculpts the signature horse and jockey on top.

In another change, Susanne flipped the horseshoe on the front of the cup. The original design, with the opening of the shoe at the bottom, flew in the face of superstition: a downward-facing shoe is said to spill out good luck.

Today, Susanne and Bill spend four to six months on the trophy, never touching it with bare hands. In contrast to the days when it served as a beer mug or could be left at an airport without getting stolen, the trophy now has its own security detail for protection.

And as of 2018, Susanne’s business, now called S.R. Blackinton, has full ownership of the project; its trademark appeared on the trophy for the first time last year.

Currently, none of Susanne’s children are interested in the business. Her 26-year-old daughter has helped with product development, but “has her own path,” Susanne says.