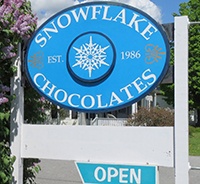 Long before Bob Pollak opened Snowflake Chocolates with his wife, Martha, in 1986 in Jericho, Vt., he was making sweet creations for his father's candy business in Pittsburgh. Today Snowflake, which has expanded to a second location in South Burlington, Vt., employs three generations of family members who work side by side.

Michael Pollak, Bob's father, began Pollak's Candies after a lifetime of learning the trade from a Greek candy maker. Michael and his wife, Helen, opened up the first family store in their Pittsburgh home in 1948.

After his father's death in 1983, Bob Pollak found the old recipes in a safe deposit box and decided to carry on the family tradition in Vermont after working for years in the banking industry. Bob, now 73, still holds the reins at the multigenerational company.

"My dad has not let go of the business yet," says Sharon Wintersteen, one of Bob's four daughters and the unofficial spokesperson for the chocolate company. "He will drop dead in a candy kettle."

Bob and Martha started Snowflake Chocolates in their Vermont home. The name is an homage to Jericho native Wilson A. Bentley, a farmer affectionately known as "Snowflake Bentley," who became the first person to photograph a single ice crystal. The Pollaks slowly began to get their chocolate products out through local school mail-order campaigns and craft fairs. They sold their first home and bought a farmhouse with an attached carriage house and opened the store in the family's dining room. The carriage house became a production facility and eventually expanded to better accommodate the retail component of the business.

Although Bob still makes the candy, Wintersteen and her two sisters -- Shelly Dionne and Betsy Soutiere -- have joined the operation full-time. Soutiere handles office work and accounting, while Dionne has taken over packaging and production. Wintersteen focuses on wholesale business, fundraising and advertising. Another sister, Dianne Pollak, helps out on nights and weekends and serves as Snowflake Chocolates' IT specialist.

From September through the Easter holiday, the Pollak family pulls 60- to 70-hour weeks and cranks out nearly 100 types of chocolate treats. Because keeping the handmade tradition alive is important to the family, Snowflake Chocolates has to work harder than some of its automated competitors to keep up with demand.

"Working really long hours together -- you can get on each other's nerves," Wintersteen acknowledges. "But the people who know us are always amazed how close we are for the amount of time we spend together."

Generational divisions do crop up and make some decisions difficult, says Wintersteen. The second-generation sisters believe that sophisticated packaging and new technology and marketing initiatives will improve the business, despite some hesitation from their father.

"My father knows one way -- the way his father taught him," says Wintersteen. "The old ways don't work like they used to. We've had to push him a lot, but we'll only push him so far. It's about respect. It's about the hard work that he has put into the company to make it what it is."

Although the business doesn't have a formal succession plan, the sisters and their parents have begun to talk about the future. For example, the business has outgrown its current production space. "In order to expand, the financial piece of that is going to have to come from the younger generation," Wintergreen says. "If we're going to take this company on, we need to make those decisions."

Wintersteen's son, 26-year-old Alex, and Soutiere's teenage son, Michael, will likely be a big part of those decisions. Alex is a full-time candy maker who works alongside his grandfather at Snowflake Chocolates, and Michael works part-time at the business. All of Bob and Martha's nine grandchildren have chipped in over the years to help make and sell the family candy.

Whether the company eventually transitions to the third generation is still up in the air, but the Pollak sisters are committed to seeing Snowflake Chocolates thrive for the foreseeable future. "I think a lot about my grandparents and this gift that they have given to us. Chocolate is in our blood," says Wintersteen. "We're talking about three generations working under the same roof with the same recipes dating from the early 1900s. It's a part of who we are."