How important is talent management to family businesses? It’s a major, pressing concern, according to a new survey of U.S. family business leaders by global professional services firm PwC. The percentage of survey respondents who cited “attracting and retaining the best talent” as an important personal goal was higher than the percentage who selected “improving profitability” (85% vs. 76%). 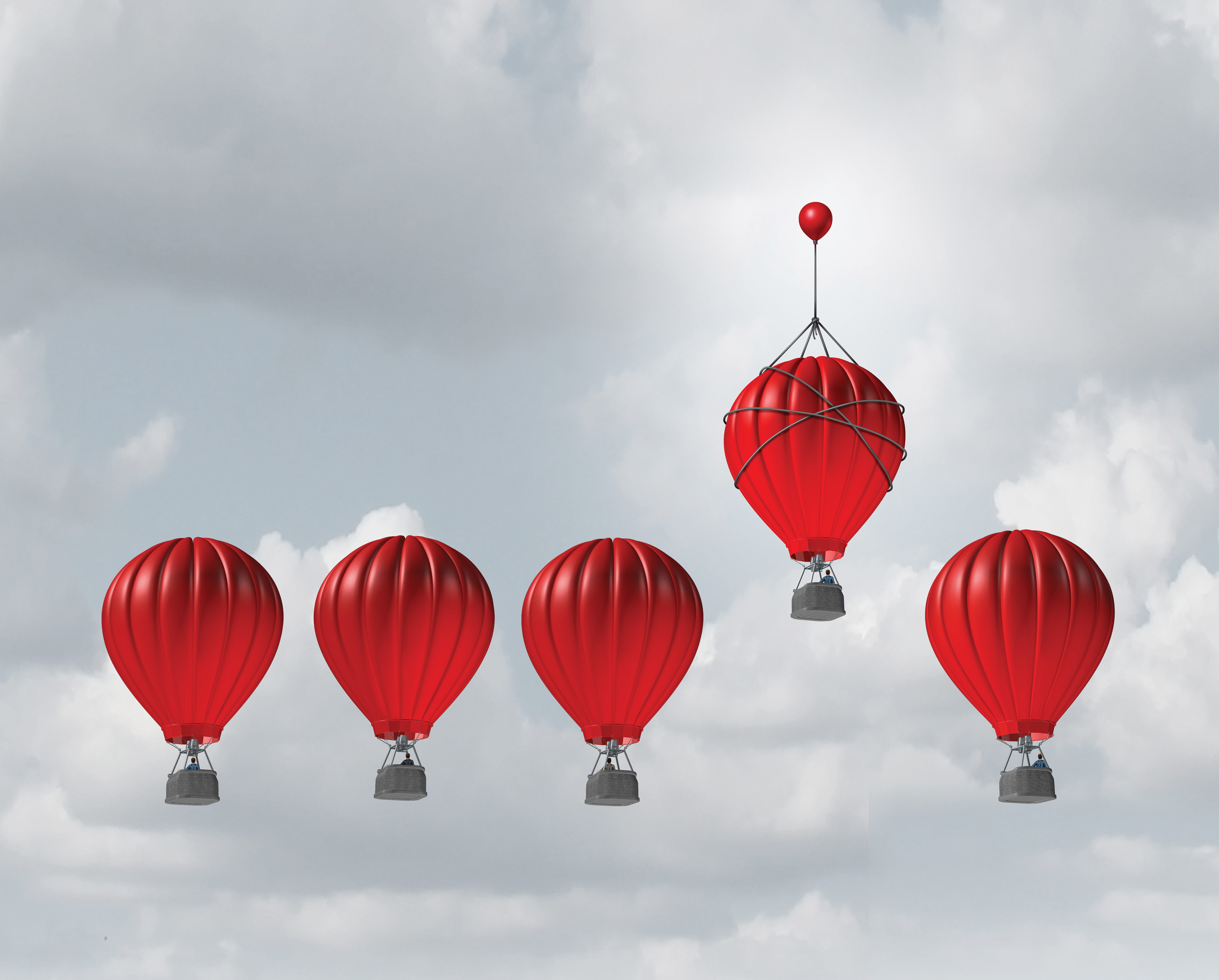 PwC polled 168 U.S. family business stakeholders online and by phone between April 20 and Aug. 10, 2018, as part of a global survey of nearly 3,000 family companies. Owners, founders and NextGens were among the respondents. The firm has been conducting a U.S. family business survey biennially since 2008.

Family companies are well positioned to succeed at talent management. More than 70% of the survey participants said their company values create a competitive advantage. What’s more, the 2017 Edelman Trust Barometer (a study conducted by Edelman, a Chicago-based global communications marketing firm) found family businesses are more trusted than non-family businesses by a 24-point margin in the United States.

“We’re trying to encourage families to think about embedding their values and their purpose in their strategy, leveraging the trust they have with their employees and their customers,” says Jonathan Flack, U.S. family business services leader at PwC.

“If your values and your purpose are grounded in your strategy, you will continue to focus on the employees you have, provide the education and up-skilling needed, but then also be able to go onto the market with genuineness and speak about your values and purpose, speak about where you’re going in the future,” Flack says.

The survey results indicate, however, that families have more work to do in this area. While 81% of the North American respondents in the global survey felt that they had a clear sense of agreed-upon values and purpose as a company, only 49% had put these values in writing.

Optimism about growth
Family business owners tend to be optimistic, and PwC’s U.S. survey respondents were confident about the near-term prospects for their companies. More than three-quarters (79%) expected to deliver “steady growth” by 2020. Another 16% anticipated “quick and aggressive gains.”

About half of these business leaders said they would invest in their companies in the next two years, with 52% expecting to make significant strides in their digital capabilities and 47% planning to bring in outside expertise to help run their businesses.

Strategic changes were also predicted. Nearly four in 10 of the study participants (39%) said their businesses might buy or merge into other companies by 2020, and 16% anticipated significant changes to their business models.

Despite these ambitious goals, most survey respondents neglected to formalize their planning. Only 42% reported having documented plans with budgets and key performance indicators to measure against. Nearly a third (31%) said they had an informal plan, and 27% said they had no strategic plan at all.

Succession planning procrastination
The U.S. survey population had high expectations for their next-generation family members. Almost two-thirds of respondents (62%) planned to pass the business on to the NextGen, and 39% said they would pass on leadership within five years. Nearly half (47%) of the survey participants said their NextGen leaders would take on non-senior roles in the family business.

Most of those surveyed (62%) said they were encouraging the NextGen to gain work experience outside the family business. Family business consultants generally recommend that NextGens establish a track record elsewhere before joining the family firm; it helps the young family member to build credibility and confidence, and it gives them an outside perspective that in many cases can help the family business.

Unfortunately, the U.S. family business leaders who completed PwC’s survey were more likely to keep their transition plans in their heads than to commit them to writing. More than half (58%) had succession plans, but most of these plans were informal. Only 18% of respondents had documented succession plans that were communicated to others in their organizations. 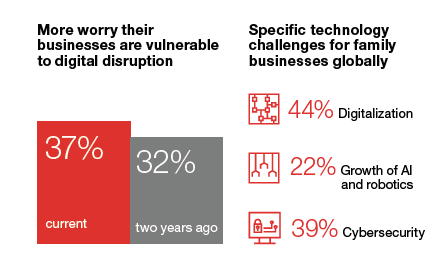 Participants in the 2018 U.S. family business survey reported a growing concern about digital disruption, with 37% acknowledging that their businesses are vulnerable, an increase from 32% in 2016.

Digitalization was listed as a challenge by 44% of PwC’s 2018 global survey participants. The growth of artificial intelligence and robotics was cited by 22%, and cybersecurity was noted by 39%.

A significantly higher percentage of participants in PwC’s U.S. family business survey than global survey respondents said their company could be vulnerable to cyberattacks (57% vs. 40%).

“And then, in addition to that, families are very loyal to their employees. That’s a hallmark; that’s something they’re very proud of. And when the business environment is changing as quickly as it is, family businesses are very concerned they’re not going to change quickly enough. And if they had to change faster, would they potentially move away from some of their values and some of their core beliefs, one of which being loyalty to their employee base? 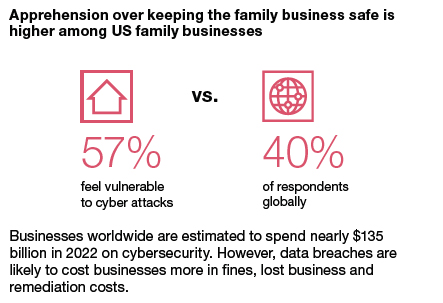 “So they’re concerned that they have some employees who don’t have the skills that are going to make them successful in the future, and how [will they be] able to deal with that while still being true to their values and to their core?”

NextGen family members might be able to play an important role in getting the family business ready to address digital disruption. In a 2017 PwC survey of NextGens, only 7% thought their family firm had a strategy fit for the digital age, and 75% said they had big plans for moving the business forward.

Professionalizing the board
Eight in 10 of the U.S. family business survey respondents with a strategic plan and a board of directors reported that their directors were involved in developing and achieving agreement on the plan. More U.S. family business owners are beginning to realize that an independent board can help their companies fend off disruption, Flack says.

“A lot of family businesses still are working hard to professionalize their board. We see that as an area of growth,” he says.

Family firms recruiting independent directors today are seeking those with experience expanding into new markets, managing organizational change or doing M&A deals, Flack observes. “What they’re asking for on their board is consistent with this overall concern of adapting to transformation,” he says.

An independent board can also help a family company manage succession, PwC notes.

The trust premium
Family firms working to stay ahead of a rapidly changing marketplace can use their values to their advantage, according to Flack. “We try to take an optimistic view about companies facing disruption,” he says.

Most multigenerational family companies have survived at least one cycle of disruption. Companies can draw on this history in confronting today’s challenges. “We have seen families that have successfully managed through disruption, through technology changes and through changes of consumer habits, while still keeping their values and their purpose at the core of their strategy,” Flack says.

Family businesses can leverage employee and customer loyalty, Flack adds. “Trust will help companies get through dramatic change and transformation.”