Succession planning in 60-seconds: Mistakes are part of the process

By The CFAR expert team
Photo 1: 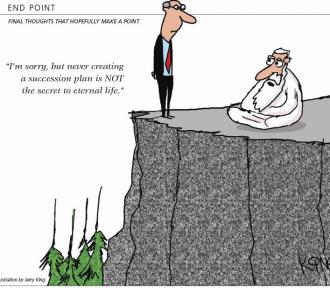 Why do people get anxious, worried, bothered when talking about succession

Think about it. Everything is at stake. When that happens, anxiety is a healthy response. It’s also a great motivator to start planning.

What is the biggest misconception about succession planning?

Succession is not a moment in time in which one leader passes the reins to another. We know for sure that the next stage won’t look like the last one.

What are the biggest mistakes famiies make in developing a succession plan?

Mistakes are part of the process. The key is to create an active dialogue between successors and current leaders. Families can and usually do have blind spots. Be aware of this. Do your research.

What’s the best advice you’ve ever heard/given about succession planning?

Begin the discussion sooner rather than later.

What’s the worst advice you’ve ever heard/gotten about succession planning?

“Someone will step up. Don’t make waves.” Wrong. Start the discussion now. Like today.

Each succession is different and will have its own set of drama, emotions, villains and heroes. When the issue is addressed regularly with open discussion, the odds of success are far greater.

All totaled, Nancy Drozdow, Debbie Bing, and Caleb White have over 60 years

in succession planning at CFAR.