By Scott Chase
Listen to article 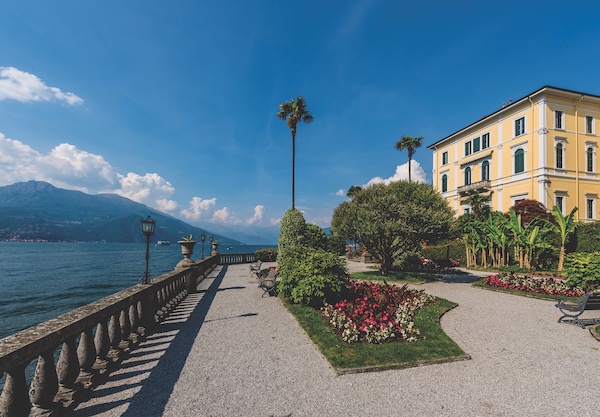 Not many family businesses cite the beginning of World War I in August 1914 as a key turning point in the history of the owners. But that’s the tale told of Bellagio’s Grand Hotel Villa Serbelloni, for five generations the seat of the Bucher family and for 150 years arguably the best hotel along the shores of Italy’s fabled Lake Como.

The villa was built in 1854 as a vacation home for a countess and her family and was expanded in 1872; one of the finest mansions on the lake was converted into a hotel. As the global conflict dragged on, the property morphed into a military hospital. Its owner, Leone Breitschmidt, crushed by the financial burdens of the war and the collapse of tourism, sold the property in 1918 to his colleague and friend, Arturo Bucher, the patriarch of an extended Swiss family renowned as hoteliers across much of Europe and in parts of the Middle East. Fast forward more than a century to 2021, when Jan Bucher assumed the role of general manager, bringing in the fifth generation of Buchers to own, manage, expand and live in the building.

Grand Hotel Villa Serbelloni is a true family business in every sense of the word. Complementing Jan on the management team is his father, retired general manager and wine fanatic Gianfranco, who advises Jan on the operation of the hotel and its restaurants and other activities and serves as accountant; his mother, Dusia, in charge of the interiors and décor of the hotel and a key mover behind the introduction 30 years ago of its spa and wellness center; and his “very charismatic” brother, Paolo, who works directly with guests from behind the front desk.

Family first with succession in mind

The Buchers maintain a “family first” policy in almost everything. “The Grand Hotel is our home,” explains Gianfranco. “We live here. Our feeling for the Grand Hotel is not based on money and work alone. It’s also the keel of our family’s security. We tell our cousins and relatives that if they can’t find a job and they don’t know what to do, they can always come here. Just remember: You are going to have to work. We’re not offering paid vacations!”

This openness in the past led to some conflicts, as nearly all family members wanted a voice in hotel operations, forward-looking plans and income distribution, Gianfranco concedes. “The family recently set up a holding company that prevents fragmentation and provides the chance for just one person to lead the company.” When Gianfranco retired recently, it was both natural and expected that son Jan would step into the general manager role.

Jan extends the Bucher tradition of “from father to son” and exemplifies the goal of consolidating the family holdings into a structure that permits innovation, discussion and change without opening the door to internecine strife. Jan succeeded Gianfranco, who took over from his father, Rudy, the oldest son of Arturo. Before Arturo, the founder of the dynasty, Franz Joseph Bucher, is described in family lore as a self-made pioneer of the European hotel trade, eventually owning a dozen hotels, six mountain railways, electricity-generating stations and various interests in the timber industry.

At his passing in 1906, Franz Joseph left behind 16 children, all of whom had a stake in the family enterprises and many of whom in the end set up vaguely competing hospitality businesses: Otto Bucher of the Angleterre in Geneva, Oscar Wirth of the Hassler and Eden in Rome, Peter Wirth of the Waldorf Astoria in New York City, and Elsa Wirth-Bossi of the Regina Palace in Stresa.

“I hope that my two sons, Jan and Paolo, are able to continue doing the work of the past begun by my grandfather Arturo, expanded by my father Rudy and mother Marisa, and currently being carried on by me, Dusia and the brothers,” Gianfranco says. “One hundred years of life at the Grand Hotel has taught us how unpredictable, unsettled and dauntingly complicated this work is and that family management has a very special reason to be. It ensures added value when our mission remains clear: Earn a living, yes, by making guests happy, asking in return only that they reciprocate with the same good manners and respect we endeavor to observe every day. This is our guiding principle, and I believe we have instilled it also in our staff and the company as a whole.”

Dusia seconds these emotions, and adds, “I think the disappearance of prestigious family-run hotels would be a big loss. Family management offers guests — and staff — guarantees that merely economic management cannot provide when it comes down to just numbers.” Tourism, Dusia notes, is different these days: “Clients have changed, and the way guests stay in hotels has changed, but our type of management is as valid as it ever was. Jan and Paolo, as they continue on our same path, will bring all this same character to a personalized relationship with guests.”

Historical footnotes and the next generation

Having been geographically at or near the center of big global events of the last century — the World Wars, the Great Depression — has brought its own share of challenges. In 1929 the global economic collapse forced Arturo to sell the original part of the growing complex, Villa Serbelloni, to another business family, specifically Ella Walker, the daughter of Canadian whiskey tycoon Hiram Walker.

Always with an eye to the future, Arturo sold the property, by then an annex to the main hotel complex, but insisted on retaining the rights to the Villa Serbelloni name. The following year, new signage went up at the site and graced the stationery then used to conduct business: Grand Hotel Villa Serbelloni, combining the names Grand Hotel Bellagio and Villa Serbelloni. On her death in 1959, Ella left the original residence to the Rockefeller Foundation.

In another interesting twist, during World War II Grand Hotel Villa Serbelloni, firmly entrenched on Italian soil, was granted the status of extraterritoriality and in effect became part of Switzerland, based on Arturo’s Swiss citizenship and deep connections there. “Beyond the rhetoric,” Gianfranco recalls, “the Italian government’s fascist regime had every reason to stay on good terms with Switzerland.” Even dictators need a safe place to park their loot!

Moving to the present, last June Jan Bucher and his wife presented Gianfranco and Dusia with a new granddaughter, and another nascent generation now calls Grand Hotel Villa Serbelloni home. If the past 150 years are prologue, the future unfolding before this fabled destination on Italy’s most famous lake is set for another century.

Meanwhile, in Bergamo, a view across history

To look down from the balcony window in room 8 of Relais San Vigilio al Castello, nestled high over the Renaissance city of Bergamo, is to gaze across the centuries.

This UNESCO World Heritage Site includes the medieval commercial center, or “high city” (Citta Alta), and the more-modern low city. Bisecting the two is the most complete and intact system of city wall fortifications anywhere remaining from the time of the Venetian Domination of Lombardy, beginning in the early 1400s, and looming over it all is the castello, since the sixth century an important military garrison.

At the foot of the castle, the Zani family owns and operates this small luxury hotel with a much-heralded restaurant, Cucina, and a few hundred meters down the road one finds the Ristorante Pizzeria San Vigilio, where this third-generation tribe launched its journey in the hospitality business.

The family business got its start in Bergamo in 1978 when Giovanni Zani purchased an existing building with a beautiful view looking south across the valley stretching all the way to Milan. About five years later he built the casual pizzeria on the ground floor and the rest — as they say — is family history.

Today, three brothers — Paolo, Piero and Gigi — split the duties of running a successful boutique hotel while managing a family-style restaurant and a gourmet dining destination. Paolo Zani runs the hotel and in-house Cucina restaurant, while Piero and Gigi man the cash register, reservations table and bar at the pizzeria. In a twist on the old saw, “the family that works together stays together,” the three brothers, their spouses, and a passel of children all live in the residential spaces above and below the casual restaurant. Luca Zani, and his cousin Anna, third-generation twenty-somethings, work in the pizzeria as well.

A big bump in the Zani business came 15 years ago when the family was able to buy a nearly ruined building just below the medieval battlements of the old castello. Construction started soon thereafter on an elegant, beautifully landscaped, and gardened suite of nine rooms in a modernized and multi-layered edifice, with common spaces, a dining room, operations area and kitchen, garage, and other amenities.

Timing is everything, and Paolo remembers that the global economic downturn of 2008 was a tough time, “harder even than 9/11 in terms of the disruption of our expansion schedule and the impact on global tourism.” But life goes on, and the next big hurdle to clear was the Covid-19 pandemic. With that hopefully in the rear-view mirror, the future looks bright, the family believes.

“Our philosophy is focused on establishing an authentic relationship with guests and offering human contact in a place of great charm,” says Paolo. “Hospitality is the cornerstone of our business, in our beautiful internal rooms and in our outdoor spaces ready to host anyone who wants to spend magical moments immersed in nature.”

Down in the pizzeria, Piero and Gigi are more likely to ask what you would like to drink with dinner than to talk about the family, its history and its future. On the cusp of a fourth generation, one thing they all agree on is the importance of family: “We don’t expect that our many children will all want to remain in the business,” Paolo says, “but on the other hand, who would want to leave this place?”

It's a question that the Zanis’ guests must ask themselves on check-out day.

Scott Chase is a staff writer at Family Business magazine.