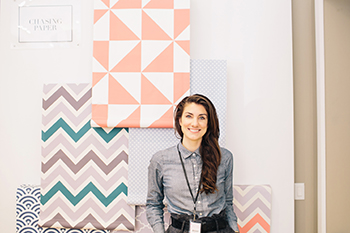 Young people often have fresh ideas when they join the family firm. A next-generation member’s innovative approach could be as simple as a way to streamline production or as complex as a new brand. Pitching these ideas to the current leadership can be intimidating, but it can also be incredibly rewarding.

At Transitions West 2017, Family Business Magazine will give the future generation of leaders an opportunity to test their business pitches on a panel of entrepreneurs in a special session we’re calling “Fam Tank.”

One of the panelists is Elizabeth Rees, who found entrepreneurial success with the support of her family’s well-established business, printing company Kubin-Nicholson, based in Milwaukee.

Rees joined Kubin-Nicholson in 2011, but found she wasn’t passionate about traditional large-format printing. Still, she says, “There’s ink in my blood.”

Rees started her own wall-covering company, Chasing Paper, after eight months of research at Kubin-Nicholson. Chasing Paper’s products are fabric pieces, somewhat like wallpaper, that can be easily installed and removed from walls without damage.

Rees says “a lot of little conversations” with the older generation developed into a formal presentation to the company’s board. In her pitch, she shared her vision, goals and budget for her new business.

While the elder generation was worried that her business would lose “hands-on” appeal through online sales, Rees says she envisioned branding and social media providing a personal touch.

“It was a different way of approaching customer service,” she says.

After her presentation, the Kubin-Nicholson board agreed to be Chasing Paper’s “parent”; the new venture needed just a modest $5,000 of capital to launch a website. There would be low overhead and only a skeleton staff.

“I had my own little business within the family business,” Rees says. “I was operations, finance, marketing and PR. I was going to the post office. I was doing all the jobs.”

It took just one year for Chasing Paper to become profitable over a total $65,000 investment from the parent company.

Rees’s advice for other entrepreneurial young family business members is to start close to home.

“The family business is in an industry where they already have equipment or infrastructure,” she says. “I would say go with the ‘low-hanging fruit.’ It’s easier for young people who want to be a part of things, but are not really passionate about what their parents or grandparents started.”

Rees says young entrepreneurs need to earn their family’s faith. “Put your head down and do the work,” she says.

Now that she has her own success with her own take on the printing industry, Rees says succession discussions are easier.

“That wasn’t really happening when I was first starting out,” she says. “It’s become a conversation much more recently, as my dad’s time is winding down. But he’s never made [his support of Chasing Paper] the means to an end.”

Rees says her family’s encouragement as she followed her dream increased her excitement about taking over Kubin-Nicholson when the time comes. “Now, having done Chasing Paper for four and half years, I’m excited to grow the core business and see what else we can do.”

To pitch your idea for the Fam Tank session at Transitions West 2017, email Family Business senior editor April Hall. The conference will be held in San Diego, November 1-3.