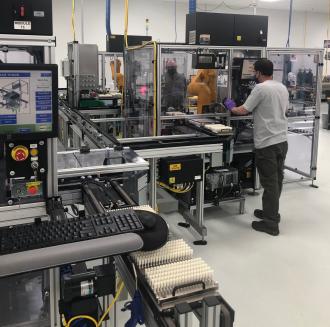 As General Motors and other companies push to make ventilators to help COVID-19 patients streaming into U.S. hospitals, the Lee Company of Westbrook, Conn., has adjusted its systems to join the effort.

The family company, founded in 1948, makes miniature hydraulic components for a variety of industries, including automotive, medical and aerospace. The automotive side of Lee’s business makes parts for GM and the car company’s sub-tier suppliers. The medical side of the business produces components that include precision orifices and valves for ventilator manufacturers.

Historically, explains second-generation CEO Bill Lee, the company’s work with ventilator makers “didn’t really amount to a lot of business, so we never even counted it as one of our major markets.”

Since late March, when GM announced its partnership with Ventec Life Systems to build critical-care ventilators, production at his company has “gone kind of crazy,” Lee says.

GM asked the company to step up its production of restrictors, a simple, small part.

“The phone rang one Friday evening at about 8 o’clock,” Lee recalls. His team's first reaction? “’Tell us more.’ ”

Upon hearing the details, the team sprang into action. “By Saturday we had about 13 people in the company working on checking the lead times, and when we could start delivering. And by Sunday we quoted for the beginning of shipping on Monday. And by Monday we were making parts and shipping against a promise of a purchase order, which came in Wednesday or Thursday.

“At the same time, the medical side started blowing up with people calling us for crisis shipments.”

Operational adjustments
Ordinarily, Lee’s automotive unit runs three shifts. The GM-Ventec business is “not stretching us, capacity-wise.”
The medical side is a different story. To accommodate the extra work, the company had to transform medical operations from one shift to three, “virtually overnight,” Lee says.

That’s possible through a combination of “purposeful diversification” and “pure dumb luck,” he explains.
“The automotive market is terrible. The aerospace market’s not very good. So we’re moving people from those business units over to the medical side.”

Social-distancing measures have been adopted to help protect plant workers against the coronavirus. “As a private company, because we take such a long-range view, we have a lot more square footage per person than if we were a typical public company,” Lee says. “So we’ve been able to push [work areas] out to the corners.”

Typically, employees performing the same tasks would be working closely together, but “we’ve got some over here and some over there,” Lee explains. “So if someone gets sick in one of those areas, you don’t suddenly lose everyone in the entire department.”

In addition, “We’re shutting down the machines for about 20 minutes between shifts, and we’re letting Shift 1 totally exit the building before Shift 2 is allowed in.

“When you come to work, you stay in your car until somebody comes out and gives a sign. We never did things like that before. We always had a handoff, Shift 1 to Shift 2.” During a face-to-face handoff, Shift 1 supervisors would advise Shift 2 counterparts about machine glitches and the like. “Now that’s all getting done via computer and telephone.”

Community support
Members of the Lee Company’s engineering department are using the company’s 3D printers to make frames for face shields that are being assembled and donated to local hospitals through a local grass-roots initiative. “They all started doing it and then asked permission: ‘By the way, do you mind that we’re making these frames for the face shields?’ I said, ‘Absolutely, go for it,’ ” Lee says.

“There’s a real good sense of camaraderie. I’ve been doing a lot of [intranet] postings, keeping the communication up, and this week the posting is about how, whether you’re working in that group [making ventilator parts] or not, it’s all the same team. If it weren’t for the people doing other stuff, they couldn’t be doing that job.”