Leadership. The answer is always yes (until it isn't)

By As told to Patricia Olsen
Photo 1: 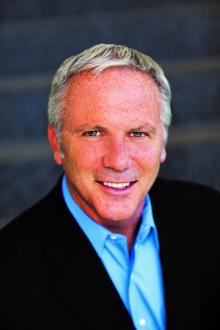 Tom Krouse is the President and CEO, Donatos Pizza, Columbus, Ohio. He took the time to chat with Family Business reporter Patricia Olsen to discuss leadership lessons and to answer the mystery of why he has two guitars on his wall.

Generation of family ownership: Second. I’m married to Jane Grote Abell, our executive chairman of the board and Chief People Officer. Her father, Jim Grote, founded Donatos Pizza in 1963.

First job at this company: Vice president of marketing. I was at Wendy’s for a number of years. Donatos brought me in after the company was sold to McDonald’s in 1999. The family bought the company back in 2003.

Most memorable thing I learned from my father-in-law: Doing business with love, values and a heart; treating others the way you want to be treated. He talks about “agape capitalism,” his belief that doing business with ethics and values is a better way to do business. He taught me there’s room for that kind of care in the business, which people talk about but don’t really live.

Most memorable thing I learned from my mother-in-law: Take care of those who need help; really look at the human side of the business. She always considered the people within the company and ways we could help them. She left the company before I arrived and opened a non-profit in Columbus, Amethyst, which helps young women and mothers suffering from alcoholism or drug addiction.

Best thing about this job: Employees can achieve a sense of belonging, much like being in a family, and they can also be successful — achieve things they didn’t think were possible. Also, we have a number of franchise partners, and watching their second generation join their businesses and create legacies is rewarding.

Our greatest success: We created the Reeb Avenue Center in our city, with most of the credit going to my wife and father-in-law. We converted a 100,000-square-foot, 110-year-old school into a social services center containing 14 non-profits in the neighborhood where our first store still operates. The area had suffered crippling unemployment and drug addiction, among other problems, and the center helps people with job training, daycare and other services.

Best advice I ever got: Something I learned from Dave Thomas at Wendy’s: You earn your reputation by the things you do every day. Talk is talk, strategy is strategy, philosophy is philosophy; it’s really about what you do.

Quote from our company’s mission statement: To promote good will through product, service, principles and people.

On my wall: Two guitars our employees gave me for my 60th birthday, one signed by Twenty One Pilots and the other by Rascal Flatts. I play in a bluegrass band, and I know the members of both.

One of my greatest accomplishments: Our strong relationship with our franchise partners. Also, I developed our Red Robin program. We are in nearly 80 of their casual dining restaurants.

Advice for other family business leaders: Don’t be afraid to have honest conversations about what’s working and what’s not. Be courageous enough to say, “I know this is what we believed all along, but it may not be true today.”

On a day off I like to … play music. I write, play and record songs.

Philanthropic causes our family supports: Issues of poverty and diversity. We’re also heavily involved in the arts, which we feel are neglected.

Book I think every family business leader should read: Traction:Get a Grip on Your Business, by Gino Wickman, which introduces his Entrepreneurial Operating System (EOS), in which entrepreneurs work with integrators and other professionals. The follow-up book is Rocket Fuel. We’re going through the EOS process now. It really helps when moving to the second generation.

I realized I had emerged from the previous generation’s shadow when … my father-in-law told me I had the job and moved out of his office. I moved in the following week, and I’ve been in the position for 11 years.

Future succession plans: My stepson is working in the business now as our executive director of innovation, and it’s likely that my stepdaughter will be joining us. We’re putting together an immersion plan for them so they can experience different aspects of the business. They’ve both also worked elsewhere.

Words I live by: “The answer is yes until you have a reason to say no.” It’s something Don Calhoun, my boss at Wendy’s, always said. If it ends up getting to no that’s fine, but if you say no right away, you might miss out on some magical things. It has paid off for us a million times.