The packaging manufacturer quickly pivoted to making the shields, which it's donating to healthcare institutions and selling to businesses that are operating during the pandemic.

Pivoting to make a new product quickly has always been a hallmark of Lacerta Group Inc., a family-owned plastic packaging manufacturer based in Mansfield, Mass.

But never has the company shifted gears as quickly as it did last March. Co-founder and principal Mostafa Lotfi, 56, 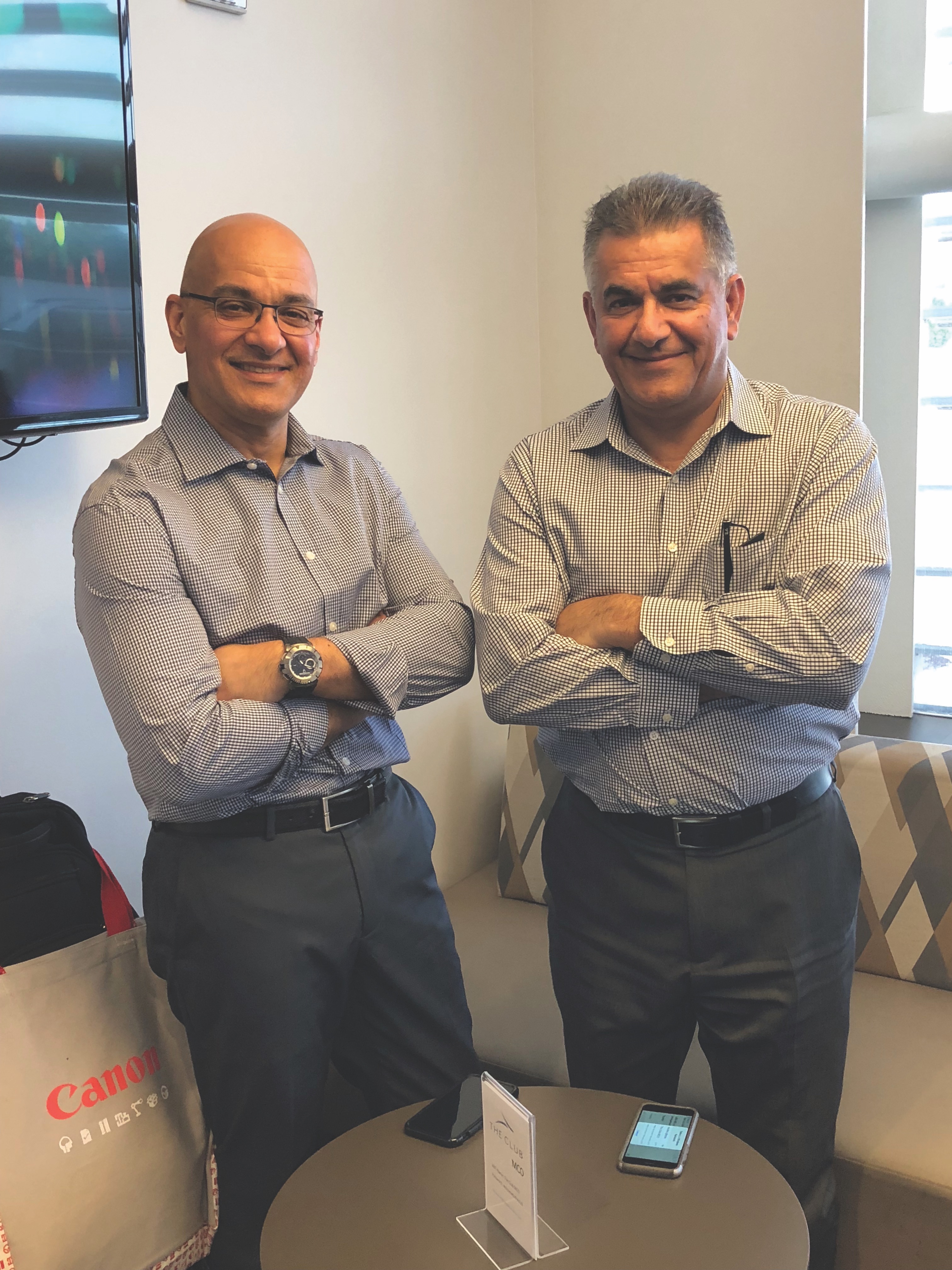 received a mass email from a doctor friend requesting help in securing face shields to protect against infection from COVID-19 patients he was treating.

Lacerta Group focuses mostly on custom plastic packaging for a variety of products, such as grocery items and consumer electronics. Mostafa, 56, was sure his company could retool its equipment to produce the kinds of face shields needed by frontline workers — from doctors to supermarket employees — across the country.

The email came in on a Friday. Mostafa designed a prototype shield over the weekend. By Monday the shield was in production. After a few tiny tweaks Lacerta started sending it to hospitals. Then the company started making more.

“We originally thought by the end of March we’d produce 20,000 shields,” says principal and co-founder Ali Lotfi, 61, Mostafa’s cousin. “By the next morning, that plan went to half a million. Then we scaled up our production capacity.”

In mid-May Lacerta was churning out 350,000 to 400,000 face shields per day, via three machines and three shifts in Massachusetts and one machine and one shift in its California facility. The scale of the endeavor has far surpassed the family’s original plans. In May, Lacerta sent its first shipment (three truckfuls) to the Federal Emergency Management Agency.

The firm is donating 1,000 face shields to any hospital or other healthcare institution that reaches out with a request. As of early May, the company had produced more than 6 million face shields and donated about 250,000 of them. The donations have slowed down a bit as the company receives fewer requests, but it’s still donating cases every day.

Lacerta is selling the shields to grocery stores, co-packers, food processors and other essential businesses. The masks are made of a single sheet of anti-fog plastic (the same type used to make soda bottles) that adjusts to various head sizes. 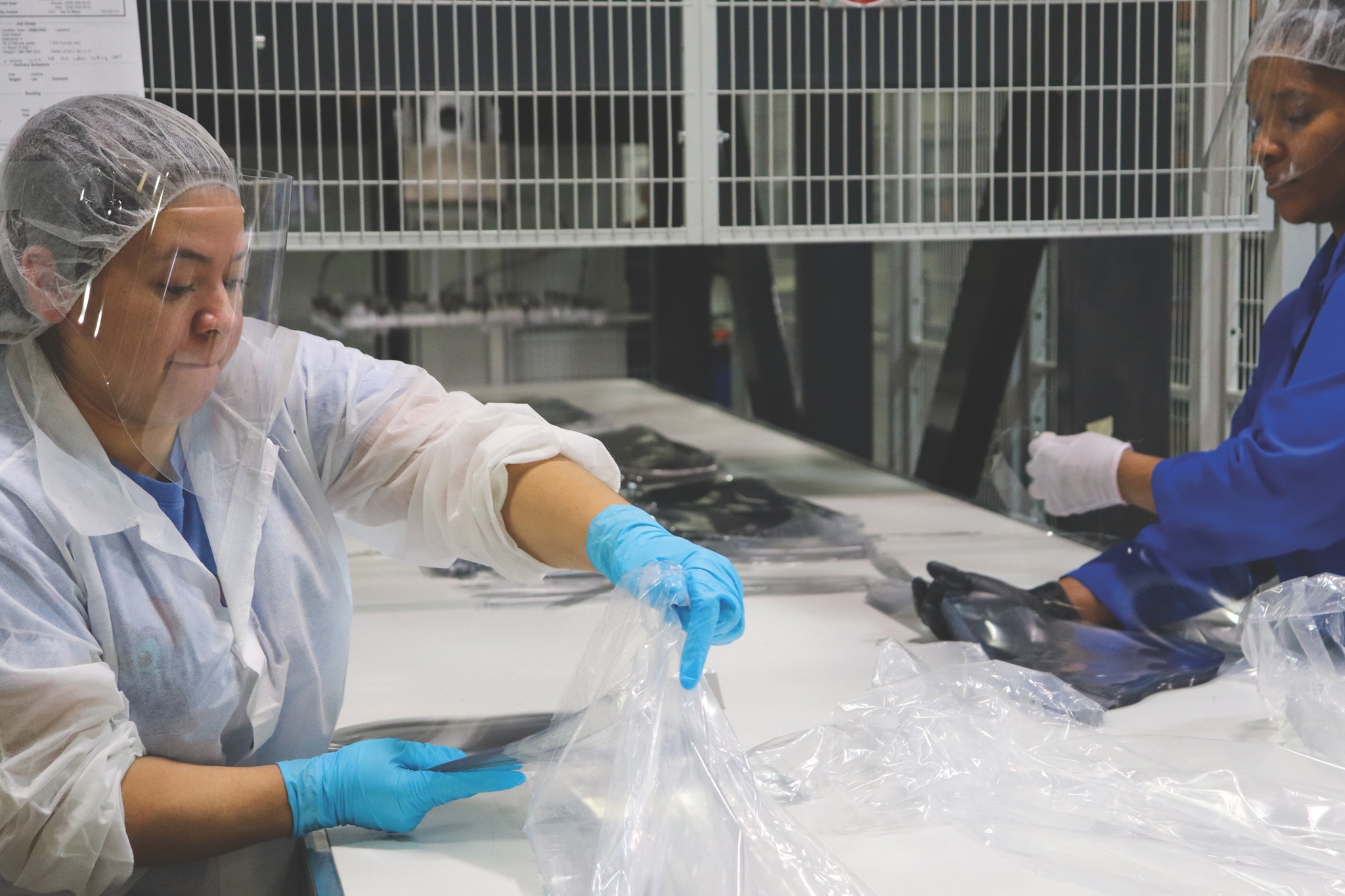 sed on the equipment and materials that we had in house,” Mostafa says.

Once the principals decided to start producing masks, their employees quickly rallied around the idea.

“We are generating revenue, which has been positive from our employees’ point of view, but they’re also happy to be doing something that’s necessary and helping people,” Ali says. “Our employees have been sending us emails and letting us know that they’re so happy to work in an organization like this. That’s been very rewarding to see.”

Face shield production now represents about 25% of Lacerta’s total production, while the firm has seen about a 30% drop in other orders since the crisis hit. To accommodate the mix shift, Lacerta committed one extrusion line and four production machines to the shields.

Flexibility pays off
This isn’t the first time Lacerta has changed its business model, though previous pivots typically reflected changing economics rather than an urgent community need.

The company — founded by Mostafa, Ali and Ali’s brother Mory Lotfi, 56 — began in 1993 as a recycler of data storage products like computer cartridges and videocassette tapes. That led to work producing packaging for Polaroid. Over time, Lacerta focused more on the packaging than the recycling.

“Over the last 27 years, we have run through several industries that have dried out; we’ve had to change our technology,” Ali says. “Polaroid was 80% of our sales at one point and then they went to nothing. We have been able to adjust very quickly to meet the needs of our customers and recognize what those needs are going to be.”

The three founders remain co-owners of the firm. Ali serves as president and oversees sales, Mory handles finances and Mostafa focuses primarily on production. Ali’s wife, Denise Lotfi, 59, serves as Lacerta Group’s accounting manager and has worked at the company since its launch.

“Innovation has been part of our success, and being flexible and able to change on the fly,” Ali says. “That has kept us competitive and able to compete with bigger corporations across the United States and Canada.”

The firm also benefits from having a team of eight designers and a mold shop in-house, which speeds up the production process drastically.

“We can turn around concepts and get production molds made in a fraction of time compared to the industry norm,” says Jazmin Lotfi, 28, Ali’s daughter, who works in sales and marketing. “We also don’t work on any commodity-style packages that you could get from anyone here or overseas. We try to have our packages distinguish our customers on the shelves and add value.”

Lacerta’s status as a privately owned family business allows it to be more nimble when opportunities arise. There are fewer layers of bureaucracy at Lacerta, where even major decisions often follow relatively casual conversations.

“We mobilize quickly and are willing to adapt,” Jazmin says. “That can be hard for some people, but it’s always been a part of our culture.”

The ability to move quickly reflects an inherent trust among family members. Ali, Mostafa and Mory lived in Iran as children before moving to the United States as teenagers. Ali came first, in 1978, to attend engineering school at Northeastern University. Mostafa and Mory followed shortly after and finished their high school education in Massachusetts before going on to study engineering at Northeastern. Ali and Mory ultimately earned master’s degrees in engineering as well.

“We have grown up together from childhood, so we read each other very well,” Mostafa says. “The majority of our decisions, we just have a conversation and then decide what we need to do and do it. We can make a decision in a matter of minutes, if we feel strongly that it’s what is required. We will implement it right away.”

That type of decisiveness is a common trait among successful family businesses, says Edmund (Ted) Clark, executive director of the Northeastern University Center for Family Business. Once they’ve been around for a few decades, family businesses have a competitive advantage due to the combination of their experience in various business cycles and their ability to make decisions while thinking long-term rather than worrying about shareholders or outside directors, he adds.

“Family businesses can take this long-term view and see the value of shifting gears and giving back to the community,” Clark says. “That reflects maturity that an adolescent startup doesn’t have, and the luxury that a public corporation doesn’t have to not worry about always chasing short-term investments.”

A growing company
Like most American businesses, Lacerta struggled in the last economic downturn. In January 2008, the firm had to reduce pay for all employees by 20%. That’s also when Lacerta switched markets from consumer and industrial packaging to focus more on food and medical devices.

The company invested in better equipment and ended up growing 8% that year. Today, Lacerta has three buildings, housing 27 lines, in Massachusetts; and a 100,000-square-foot production and warehousing facility in California with another seven lines. Nearly 350 employees work across the U.S. operations. There’s also a sister factory run by a family member in Mexico. The company says its revenues have tripled since 2014.

Aside from face masks, the firm today focuses mostly on clamshell packaging, containers and tamper-evident packaging for food, cosmetics, electronics and industrial uses.

The Lotfi children have always had a close relationship with the company, often working in the factory as teenagers. Jazmin says some of her fondest memories of the business are of working on the production line and helping out on the floor.

“Everyone was always so nice, and we felt so helpful,” she says. “We all called it ‘Camp Lacerta’ growing up.”

Jazmin was the first of the Lotfi children to join the firm full-time, coming on board in 2013 in a sales position. Then Mostafa’s two sons, Kian, 27, and Arman, 26, joined on the production side of the business. Last year, Ali’s middle daughter, Azita, 24, began working in a marketing and sustainability role. (Ali’s youngest daughter is still in college, and Mory’s two children are also still in school.)

“It was just something that I always knew I wanted to do,” Kian says of working for Lacerta. “I grew up in the industry, coming here since high school. I made the decision right out of college to come here and keep applying the knowledge that I’d picked up over the years here.”

Jazmin says she’s also gotten a business education from watching the company grow — from a dozen machines when she worked there in high school to more than 30 today.

“If I were a senior in high school and you told me that I was going to go work for my dad, I would have said ‘no way,’ ” she says. “But now I think it has made our relationship better. Learning with him as a mentor, seeing how he handles things, has changed the way I think about business in general.”

Delivering what’s needed
The Lotfi family has yet to discuss long-term succession plans. Instead, they’ve been focused on continued growth.

“We have been growing so fast, double digits every year over the past 10 or more years,” Mostafa says. “We haven’t really planned what we’re going to be doing what in five or 10 years from now. We’re just trying to make sure we can deliver what is needed now.”

For now, that means they’ll continue producing shields for as long as needed.

“The news changes daily, but there could also be a second wave [of the pandemic],” Jazmin says. “I think we’ll be producing these at some capacity — maybe not 300,000 a day, but it will be something that people are seeking out for a while."