Henry W. Bloch, co-founder of the H&R Block tax-preparation company with his late brother, Richard, and a noted philanthropist in his hometown of Kansas City, died April 23. Mr. Bloch, who was 96 years old, died peacefully in his sleep, surrounded by family. 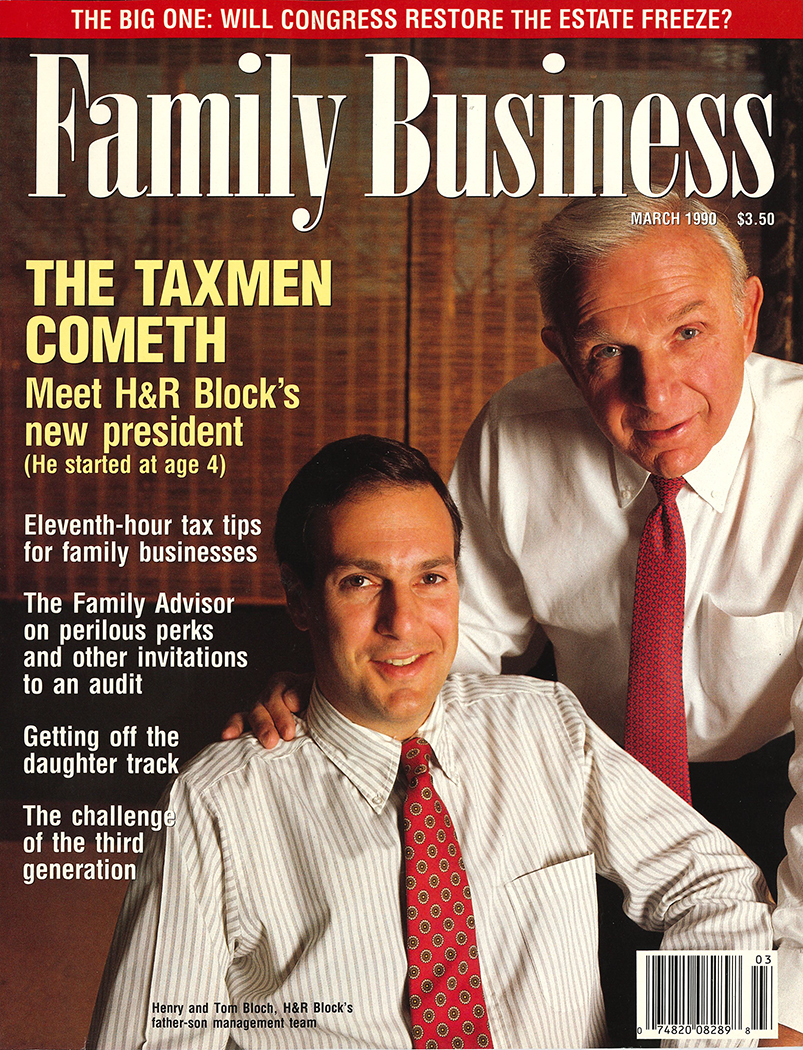 Mr. Bloch was featured on the cover of Family Business Magazine in March 1990 — the magazine’s third issue — with his son Tom, who had just been named the company’s president.

“He has a tremendous business sense,” Tom Bloch said of his father in 1990, “and having had the opportunity to learn from him has given me a great advantage.”

Henry and Richard Bloch founded H&R Block in 1955. They used a phonetic spelling of their last name to prevent people from mispronouncing it “Blotch.”

H&R Block went public in 1962 and grew to become the world’s largest commercial tax-preparation company. Richard Bloch sold his share of the company in 1982 after a bout with lung cancer; he died in 2004.

Henry Bloch’s son Tom joined the company in 1976. He was promoted to president in 1989 and CEO in 1992. In 1995, he left the company to become a middle-school math teacher; he later founded University Academy, a public charter school in Kansas City and became involved in other education initiatives in the region. His biography of his father, Many Happy Returns: The Story of Henry Bloch, America’s Tax Man, was published in 2010.

Henry Bloch retired as H&R Block’s CEO in 1992. In 2000 he retired as chairman of the board and became chairman emeritus.

The foundation places special priority on funding programs and operations at three institutions the family has long supported: the Henry W. Bloch School of Management at the University of Missouri-Kansas City, the Nelson-Atkins Museum of Art and St. Luke’s Hospital.

Henry and Marion Bloch’s private collection of Impressionist and Post-Impressionist paintings is permanently housed at the Nelson-Atkins Museum. The museum’s Bloch Building, a 165,000-square-foot-addition, opened in 2007.
All four of Marion and Henry Bloch’s children serve on the foundation’s board of directors. Marion Bloch passed away in 2013.

Mr. Bloch served as president or chairman of a variety of non-profit Kansas City organizations, including the Nelson-Atkins Museum of Art, Menorah Medical Foundation, the Greater Kansas City Chamber of Commerce and the University of Missouri-Kansas City, and as trustee of St. Luke’s Hospital.

In 1974, Mr. Bloch established the H&R Block Foundation, whose goal is to improve the quality of life in the Kansas City community. He served as that foundation’s chairman and treasurer and as a director into his 90s.