How three circles changed the way we understand family business

By John A. Davis

Forty-one years ago, Renato Tagiuri and I were looking for a framework to categorize the issues, interests and concerns voiced by Tagiuri’s executive students, most of whom led family companies. It was 1978, and I was a first-year doctoral student. Tagiuri was a faculty member in a Harvard Business School executive program and had invited me to be his research assistant. 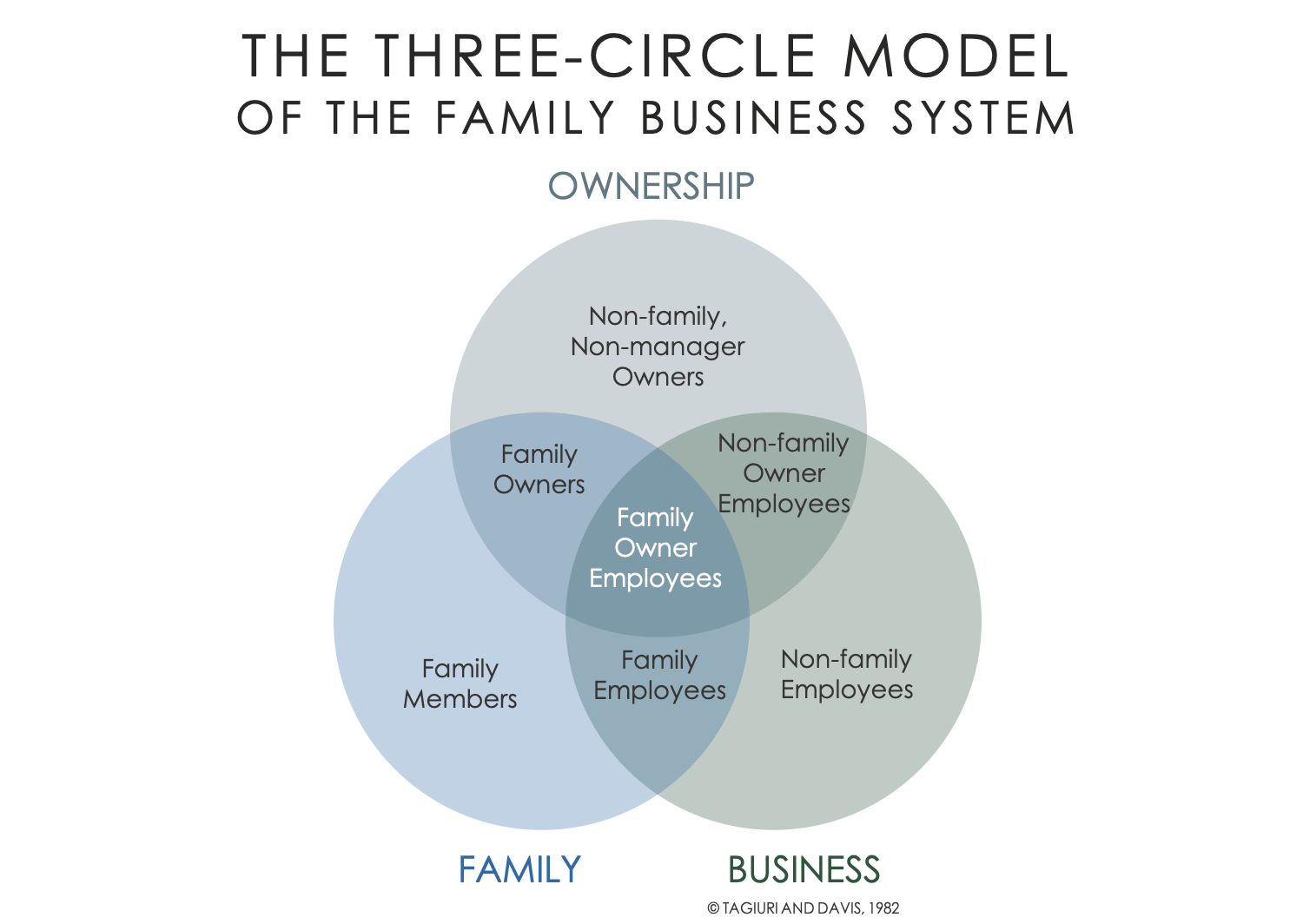 Over the next four and a half years, we interviewed family company owner-managers and surveyed hundreds of executive students on various family business topics. We met almost daily in the lounge of Humphrey House on the business school campus to discuss our projects and findings. We would diagram one situation after another, try to explain why this issue or that problem came about, and how the family influenced the business. Almost nothing in the literature guided this exploration. The only conceptual model of a family business system at the time was a two-circle framework, which recognized the influence of family and business on each other and the need for alignment of goals and interests.

This model always felt inadequate, whether we were discussing a fledgling retail operation owned and run by husband-and-wife founders or a late-generation manufacturing empire owned by cousins with many non-family executives.

Two circles became three circles
One day in the fall of 1978, I reviewed a couple of cases and Tagiuri took out his pen and drew two circles to represent the family and the business. “That’s part of it,” I remember saying, “But in this system, they are fighting over getting shares in the company. Some of the family members are owners and some are not, and the two circles don’t account for that.”

Tagiuri thought for a moment. “Would this work?” He sketched a third circle overlapping both of the first two, and labeled it Ownership.

And that was it. That would work — beautifully. The Three-Circle Model not only fit every case we could think of, but also helped us understand the perspectives, goals and concerns of everyone involved. The addition of the ownership circle brought to attention issues that were not explicitly recognized by the first two circles. Succession had to do with passing leadership and ownership. Some tough situations were resolved through buyouts of owners. Capitalizing a family business sometimes required bringing in outside owners. Linking the family, business and ownership circles now fully defined the family business system.

The diagram also framed our definition of family companies: A family company is one whose ownership is controlled by a single family and where two or more family members significantly influence the direction and policies of the business, through their management positions, ownership rights or family roles.

With the Three-Circle Model, one can depict seven distinct interest groups (or stakeholders) with a connection to the family business. Moving in a clockwise direction from the bottom left:

Each of the seven interest groups identified by the model has its own viewpoints, goals, concerns and dynamics. The model reminds us that each sector has legitimate views that deserve to be respected, but these views also must be integrated to set future direction for the family business system. The long-term success of a family business system depends on the functioning and mutual support of each of these groups.

Changing the game
Sitting around the conference table in the Humphrey House lounge in the late 1970s, Tagiuri and I had no sense that we were inventing a game-changer. For starters, there wasn’t really a game to be changed; the study of family business was in its infancy. There was almost no documented conceptual thinking on these systems. Through doodling, we were simply trying to develop a useful tool to organize our thinking. From those doodles came a model that has, decade after decade, allowed for consistently deep analysis of family businesses.

Here are six often-noted impacts and consequences of using the Three-Circle Model.

1. Family business members, students, academics and advisers worldwide have witnessed the transformative power of the Three-Circle Model. It clarifies and explains issues to be resolved, different perspectives of individuals involved and why challenges exist. Whenever I’m in a classroom helping MBA students get their arms around their system for the first time, my students will later tell me that when they saw the three circles, it all made sense.

2. The three overlapping circles or subsystems indicate that what happens in one circle influences the others. If one circle, say the family, is in conflict or stuck, it can pull down the performance of the other circles and stall the development of the entire business. A high-performing business, meanwhile, can create pride in a family and build unity in the ownership group.

3. The circles visually raise questions that beg for answers. The Three-Circle Model helps not only to identify where in the family business system issues are occurring, but also to diagnose why issues have occurred or spread from one circle to another.

4. The neutrality of the model can defuse tensions in the family business system by illustrating the power of roles; a systems-oriented approach can alleviate some of the blaming that often goes on. People have told me that relationship tensions just made more sense after they saw where their relatives were located in the model.

5. The Three-Circle Model explicitly recognizes the several interest groups or constituencies in the family business system. It becomes apparent that every group in the system has its own, legitimate interest in the family business, and all groups must be respected, responded to and integrated in some way into company policies and decisions.

6. The model teaches that the needs of the three circles, and of each interest group, evolve and change over time. Families should not only address their current challenges, but also prepare for likely future challenges. Fortunately, the development of each circle over generations is fairly predictable (see Generation to Generation: Life Cycles of the Family Business, by Kelin E. Gersick, John A. Davis, Marion McCollum Hampton and Ivan Lansberg, Harvard Business School Press, 1997).

Withstanding the test of time
When so much in business, technology, wealth, family and society has changed and continues to change, how can a 40-year-old model still help us understand and manage issues in current family business systems?

Part of the reason why the Three-Circle Model has withstood the test of time is its adaptability. The model, for instance, readily incorporates new definitions of “family”: In-laws, blended families, divorced couples, adopted children, domestic partners and whoever is called a member of the “business family” through ownership all have roles within the model.

In addition, the business circle of the model may represent one business or multiple businesses, holding companies, joint ventures and more. It can even describe a situation where the business family has sold its operating company and is managing their financial assets as an entity (sometimes in a family office). The family is in a different business, but managing their assets is still their business. The “business” circle can be labeled “family office,” and the model still works.

How about a fourth circle?
I have, over the years, tinkered with adaptations and additions to the three circles. I played with the idea of having a fourth circle of wealth holders, for instance, since the holders of family wealth sometimes differ from the owners of the family business. But, ultimately, nothing seems to have the sticking power of the original Three-Circle Model.

Simplicity is central to its efficacy. Models that keep working must be simple enough to describe most of what you need to describe, and the Three-Circle Model does that.

Admittedly, even the Three-Circle Model has its limitations. It’s a helpful tool, but it’s not the only tool you need.

And what about the future? In some regards, things will change: I think, for instance, we will begin to map systems in three dimensions. I can see three intersecting spheres representing a family business system in three-dimensional space. This could allow some breakthroughs in understanding. But, as it stands, the Three-Circle Model has remained essential over the past 40 years, and I see no convincing reason why it won’t remain essential for the next 40.

Professor John A. Davis leads the family enterprise programs at the MIT Sloan School of Management. He is chairman and founder of the Cambridge Family Enterprise Group, a global advisory, education and research organization for family enterprises (JohnDavis.com). For permission to reprint or cite this article, contact Dina Dvinov at ddvinov@cambridge-institute.org.

For more comments on the Three-Circle Model by John Davis, visit the YouTube channel of the Cambridge Family Enterprise Group.