Highlights for Children takes a stand on immigrant family separation

Values and mission. Most successful companies have put them in writing, but for family companies, they’re personal. Often they’re based on the beliefs of the founder, even if that was six generations ago. 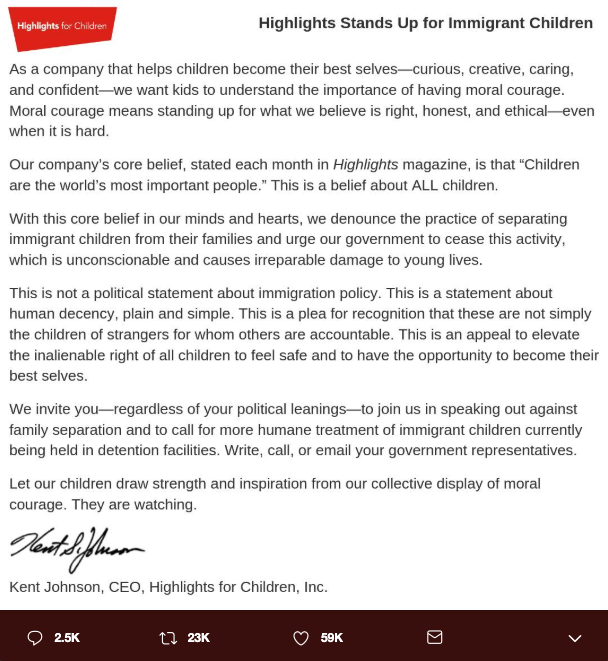 Magazine publisher Highlights for Children Inc. is an iconic brand, found in the waiting rooms of countless pediatricians. Generations of children have enjoyed the magazine’s hidden pictures feature and learned etiquette from its characters like Goofus and Galant. The company became well known in another context June 25, when fourth-generation CEO Kent Johnson released a statement criticizing the separation of immigrant families at the U.S.-Mexico border.

It reads, in part: “… we denounce the practice of separating immigrant children from their families and urge our government to cease this activity, which is unconscionable and causes irreparable damage to young lives.

“This is not a political statement about immigration policy. This is a statement about human decency, plain and simple. This is a plea for recognition that these are not simply the children of strangers for whom others are accountable. This is an appeal to elevate the inalienable right of all children to feel safe and to have the opportunity to become their best selves.”

The statement in its entirety was posted on Twitter.

Johnson, the great-grandson of Highlights founders Garry Cleveland Myers and Caroline Clark, became the third CEO in the company’s history in 2005. He says while Highlights is not a political organization, the staff, leadership and family felt it had to speak up about the situation.

“We talk a lot about being a mission-drive company. We have active conversations about our vision and how we help children around the world,” he says. “Our mission is trying to help children become their best selves, to help them be caring, creative, curious and confident.”

Leadership discussed, both formally and informally, the current state of immigrant children who are reportedly being held in cages and who are separated from their parents.

“Clearly this was a situation where children are not able to have the resources to become their best selves,” Johnson says. “With what’s going on, children are negatively impacted.

“When we realized there wasn’t much opportunity to have a direct impact, we said, ‘Shouldn’t we at least say something?’ ”

Business leaders sat down to brainstorm ideas on paper. They rewrote and edited based on how the draft statement sounded, how it “felt.” They ran the finished statement through a couple of departments that included human resources and strategy. Several family members outside the business were consulted, but the decision wasn’t put through formal governance channels, nor were all 108 family members notified.

“I felt the authority to make the decision that this would be the statement we would release,” Johnson says. He was confident that the sentiment he expressed was in line with the family business’s mission, 73 years in the making. He says being a part of family business gives him the freedom to make that call, compared to a public or even a privately held non-family company.

“Knowing I’m the great-grandson of the founders, I’ve spent my life thinking about what they believed in and their values,” he says. “We have more than 100 shareholders, and though not all of them will agree, they will be supportive of me and the idea to take a stand around our values.”

Feedback internally and externally has been overwhelming, Johnson says. Though he expected a mixed bag, internally it was positive, which he believes is attributable to the statement’s close alignment to the company’s values.

Externally, it was “much more positive than I expected. It was less important to me the number of ‘likes,’ but the number of people who were in tears because we were able to say something they connect to so personally, whether it was from their own immigrant story or something else.

“It’s been very powerful, the stories we’ve heard,” he says.

Out of more than 2,500 comments on the original Twitter post, none were negative. Many of the posters vowed to subscribe for the children in their lives. A couple considered donating subscriptions to an underfunded school.

Johnson doesn’t know if the statement has had an impact on subscriptions — nor does he care.

“We’re a highly data-driven business,” Johnson says. “But I’ve asked people not to issue any reports saying what the impact might have been. That’s not why we made the statement.”