... and doing a brisk business 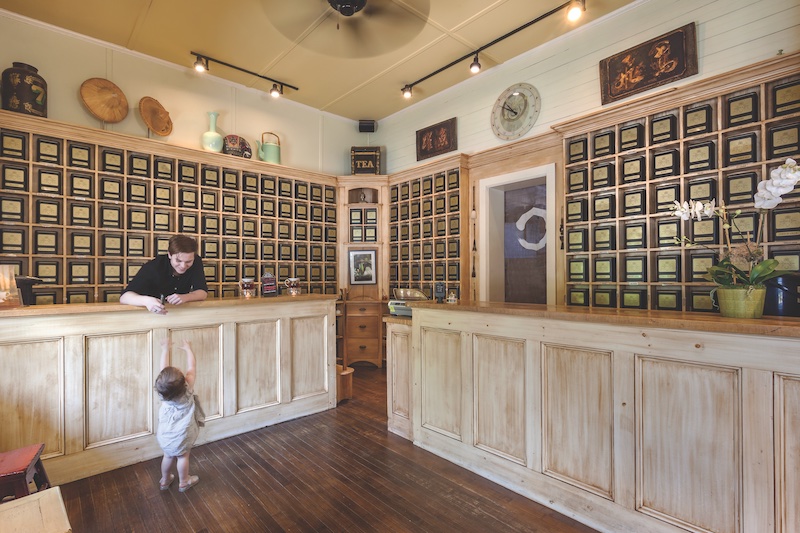 John “Papa” Harney and his wife, Elyse (“Mama”), were happy as clams managing The White Hart Inn, a charming rustic Connecticut bed-and-breakfast, until the owners decided to sell. Forced to make a quick decision, the couple opted to combine an enthusiastic love of tea, a pivotal friendship and the desire to be in charge of the family’s destiny to launch Harney & Sons Fine Teas in 1983.

It didn’t really matter at the time that John and Elyse had no sons old enough to be in business, and that money was tight with kids in school. What they did have was a fortunate friendship with one Stanley Mason, a third-generation tea merchant from London who earlier had convinced the inn owners to sell loose tea. After a few years, John and Elyse had learned a bit about the leaf, and the inn owners eventually acquired Mason’s tiny tea company. But the sale of the inn changed everything.

The Harneys decided two things: They would never have a boss again, and they would replicate Mason’s business model and start selling tea, going almost door-to-door. Capitalizing on his connections in the hospitality arena, John was able to place his teas in the old Ritz Carlton in Boston and then in Williams Sonoma culinary stores. The Harneys also registered 1-800-TEA-TIME, a direct-to-John customer service line, at the time a bit of a novelty in the tea business. This rounded out a three-pronged approach to sales: upscale foodservice, specialty retail and direct-to-consumer sales.

Meanwhile, Elyse had branched out into real estate via friends in the business. The ability to channel sales commissions back into the tea business was a plus for the budding enterprise. The practice grew, and soon Elyse was joined by her daughter, also named Elyse, eventually evolving Elyse Harney Real Estate into the leading firm in prosperous and competitive Litchfield County, Conn. Created in the living room and with headquarters still operated from the Harney residence, the firm welcomed the younger Elyse’s husband, Scott, as an agent after the business gained a bit of traction.

Five years after founding Harney & Sons, John welcomed first-born son Mike into the business. Mike had graduated from Cornell University’s School of Hotel Administration and did a wine internship in France before entering hotel management. With two young sons of his own, Mike linked arms professionally with his father in 1988, planning to apply what he had learned about the wine business to the tea trade. With time, Mike became the public face of the Harney tea empire, although he carries a vice president title, like his sibling. In 1993 baby brother Paul Harney joined the firm after completing his service as an officer in the U.S. Marine Corps. Before “Papa” Harney died in 2014, he converted the company into a corporation and then gave the next generation all but 2%.

Tea, of course, flavored the upbringing of the third generation, and in time they joined the business, bringing new ideas and initiatives to the company. Mike’s son Alex is the founder and executive chef/manager of the Millerton Café. An accomplished photographer, he also serves as director of film and photography for the company. Second son Emeric started in tea by blending best-selling selections like SoHo and White Christmas. He opened and still supervises the Harney & Sons SoHo store in New York City and serves as marketing director for the firm. Emeric also manages the company website, which currently is the source of 40% of sales.

Today Harney & Sons Fine Teas employs about 250 people worldwide, and annual revenues are north of $50 million. The Millerton, N.Y., headquarters hosts about 200 workers, and the company has salespeople on the road as well as staffing two boutique shops. “It’s not a bad showing for a company that has no external investors,” Mike says.

Back in 2019, another nod to changing times was the creation of The Hemp Division, a line of all-natural, handcrafted CBD drinks, following a discussion with friends the year before about legally growing hemp in New York state. “Since we already were making beverages,” Mike says, “it was not too big a leap. We were able to get two permits from the government, one to grow and one to process hemp to be used in CBD products.”

Harney & Sons, long famous for tea, now is one of the few producers of CBD beverages in New York. And, notes Mike, “Having the hemp division operating legally gives us a leg up in the growing market for legal marijuana.”

Beyond the local community, some years ago Mike and the family decided to participate in an organization named 1% for the Planet, a global network of businesses, individuals and nonprofit organizations tackling the Earth’s most pressing environmental issues. Mike and Paul are proud to note that this participation has generated more than $4 million in direct contributions from Harney & Sons. Mike also notes that Harney & Sons carries only Fair Trade Certified teas, supporting fair trade practices around the world that promote sustainable livelihoods, strong supply chains, safe working conditions and environmental protection.

Last year there was no international travel for the family, but with the pandemic starting to recede in some areas, trips to the world’s tea growing regions, especially in Asia, are back on the planning calendar.

“Being a small family business,” Mike says, “we take care of our people through good wages and benefits. And we try to help folks in times of need. But we are casual.” The company has not developed a statement of purpose or list of key values, he says. “We expect our team to internalize the Harney & Sons magic and conduct themselves accordingly. Seat of the pants and verbal agreements are how we have run the operations so far.”

For more than four decades, from that first pivotal cup of tea with Stanley Mason, that formula has worked for the Harney family. Mike and his clan are looking forward to a momentous year this year as the world gets back to the things they love, including fine teas and tiny restaurants.

“My dad’s first rule was to make tea an everyday luxury,” Mike recounts. “My advice is to only buy tea that makes you smile.”

Scott Chase is a freelance writer and frequent contributor to Family Business magazine.