Hard work pays off on the family farm

Kolt Kyler is a 9-year-old farm-working, grandmother-helping, pig-raising honor roll student. He's also a baseball player—and a Chicago Cubs fan. That's how he got his 15 minutes of fame. 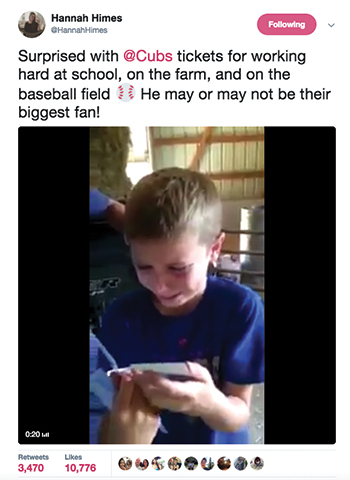 Kolt's father, Andy Kyler, owns a 31-acre farm in Pierceton, Ind., but the family also works about 100 additional acres in row crops and hay. This spring, as planting season started, Andy was offered a couple of tickets to a June Cubs game. Andy realized the tickets would be a great way to reward Kolt for his hard work on the farm.

"He went out in the cold and did his chores every day and didn't even complain," says his mother, Natalie Kyler.

Kolt is a super-fan, Natalie says. "He got a Cubs bag and T-shirt for Christmas and he was shook up about it then. I knew he would be so happy and excited to get the tickets."

Natalie recorded the surprise so her family could see Kolt's reaction. The two-minute video could make the Grinch misty-eyed.

The video shows Andy asking his son if he's willing to take on another project. Kolt agrees without hesitation. When Andy hands Kolt an envelope with the tickets, the boy is more than happy and excited—he is stunned, he is ecstatic, he is sobbing with joy.

Hannah's post drew thousands of retweets and tens of thousands of likes in a day's time. Then the Today show called. And ESPN. Local and national media, including Family Business Magazine, jumped on the feel-good story.

Kolt says he's still in "a lot of shock." Andy describes the entire experience as "surreal."

The Cubs also took notice. Several of the team's top players responded to the video and offered their personal seats to the game. Kolt, Andy, Natalie, Klay, Hannah and Hannah's fiancÃ© were all able to go.

The family received VIP treatment, and there was plenty of Cubs swag to go around. Kolt wore an Anthony Rizzo jersey gifted by the team and had all of his favorite players sign the back; his absolute favorite is shortstop Addison Russell.

Kolt helped the grounds crew prepare the field. He even got a chance to go to the outfield and touch the ivy wall.

"It was amazing," he says with a sigh still in his voice. "It's the prettiest place on Earth at that moment." 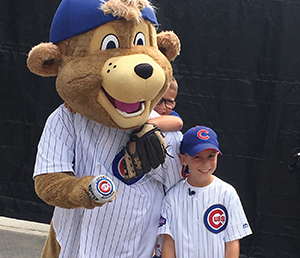 "What they did for us just doesn't happen every day," Andy says of the Cubs organization. "I could not believe how fast that day went."

Over the summer, Kolt planned to play as much baseball as possible. He's been playing since he was 3 and specializes in second base and catching.

And, of course, he planned to continue the farm work he's been doing since age 5 or 6. This year he started raising pigs, named Ebony and Ivory, which he planned to show at the 4H fair in July.

Andy says he tries to teach Kolt and brother Klay, 6, the value of hard work. "I don't keep an iron fist on them or anything, but I want them to know you work hard and it will never let you down," Andy says.

Both Andy and Natalie come from farm families and have an obvious passion for farming.

"This is my full-time hobby and I take it pretty seriously," Andy says, adding that he has a full-time job that pays the family's bills. He started his own farm in 2010.

"I'd like to have the farm triple or four times the size by the time I retire," Andy says. "The main goal is to keep the boys feeling responsible and part of something. Growing something and harvesting, you almost get addicted."

He says he doesn't want to rush the boys to grow up, but his dream is for his sons to work the farm with him and take it over when he's through with it.

"That's my backup plan," he says of the farm, "but my main plan is to be a baseball player."

Risk Management for Family Offices
Family Office Basics: What are the Capabilities of Robotics Process Automation?
Dealing with Conflict at Family Meetings