A family that's always bogged down

Cranberries are a staple of the holiday season — jellied in a can, strung with popcorn, juiced into a sparkling punch.
For the Haines family, the fruit is their bread and butter. The family’s 128-year-old New Jersey farm produces more than 30 million pounds of cranberries annually. 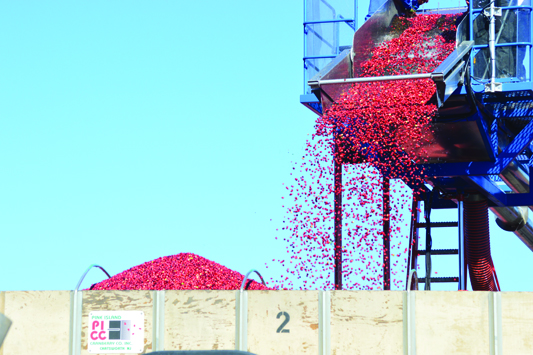 The Haines family has grown cranberries since 1890, when Bill’s great-grandfather, a Civil War veteran, teacher, attorney and businessman, bought 50 acres on which to start his business. Today, the farm is the largest grower in the state, with 1,400 acres of cranberry bogs and about 14,000 additional acres to protect the bogs.

Bill’s daughter Stefanie Haines, 46, joined the farm full-time as social media coordinator in 2007 and launched the company’s website in 2012. She started out working in the farm during the summers through high school and filled in at the office during college breaks.

Her brothers Tug, 40, and Mike, 29, also work in the family business. Mike, who is manager of the farm, clearly remembers his first job there: putting together the boxes that held the pints of blueberries, a crop grown on the farm until 2009. He earned five cents a box. When he graduated from that position, he sorted the berries in the packinghouse, packed them into pints, packed the pints into boxes and stacked the boxes on pallets to be shipped.

After graduating from Fordham University, where he studied Latin and Greek translation (“I don’t regret studying it; I don’t know if it comes in handy particularly”), Mike pursued agriculture — specifically cranberry cultivation — outside the family business. He worked with cranberry propagator Abbott Lee and learned about new hybrid varieties in development at Rutgers University.

When Mike started looking for a new job, his father asked him to join Pine Island.

“I’m really glad I gave it a chance,” Mike says. He had hesitated right after college because he felt intimidated by the legacy of the family and the company.

“It’s a lot to live up to sometimes,” he says. “People speak so highly of my father and grandfather and the two generations before that.”

Mike focuses on crop management and long-term planning at Pine Island. In the off-season, farmers determine whether to prune excess vegetation or to add sand to the flooded bogs to freshen the ground under the water that will be dry again by planting season. 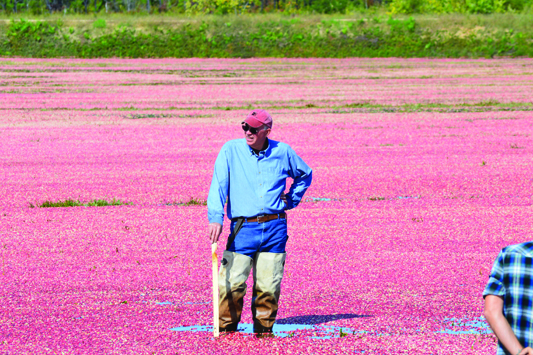 He’ll also decide if any of the plants need to be replaced. Some on the farm have been in the ground as long as 70 years, but now new varieties can produce double or triple the yield of older varieties in the same acreage.

Stefanie says after the harvest, there are plenty of fresh cranberries in the family’s refrigerators, but the fruit grown for commercial use is delivered to an Ocean Spray receiving station in Chatsworth, N.J., where they are processed into products such as dried craisins and cranberry sauce. The family joined the Ocean Spray cranberry farm cooperative in the 1930s.

At that time, the cranberries were harvested on dry land with scoops and buckets. In the 1960s, the Haines family introduced wet harvest to New Jersey. Most of the berries in the industry are now harvested by flooding bogs and allowing the cranberries to float to the top, where they are skimmed off.

In 1993, Bill cofounded a cranberry-growing venture in Chile. He has served as president of Cranberries Austral Chile since 2008. That farm reaps about 1,500 tons of berries annually.

The Haines Family Foundation was established in 1996. Bill’s sister, Holly, left the cranberry business to run the foundation.
The family continues to invest in both Pine Island and the company in Chile. Bill has talked about succession for “a long time” but is in no rush to retire, Mike says.

Over the long history of the farm, the family has learned to “work hard and always reinvest in the business,” Mike says.

“It might be easy to shortchange something in the present, but we’re always investing to make the farm better. [The farm’s] not a static thing; it’ll always be changing.”