Family is part of the package at New Jersey box company 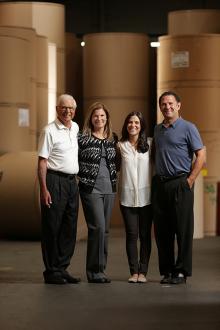 Marketing 101 teaches that packaging is an important part of marketing strategy, a tenet that has been a boon for Accurate Box Company of Paterson, N.J. The fourth-generation family business manufactures corrugated packaging featuring “high graphics” that include up to seven colors.

Accurate Box serves a range of industries, such as food and beverage companies and the auto aftermarket. The company’s top customers include Kellogg’s, Keurig Green Mountain, Worthington Industries (a steel manufacturer), PepsiCo and Danone. Its products are used in e-commerce and for packaging of wares offered in big-box stores, to name a couple of examples.

With revenue between $100 million and $200 million, Accurate Box is not as large as its competitors, but that may not be true for long. “We’ve tripled in size in the last seven or eight years,” says CEO Lisa Hirsh, 60, who runs the company with her husband, Mark Schlossman, 62, vice president of sales. Daughter Samara Ronkowitz, 30, is the marketing and sales manager.

In 1944 Lisa’s grandfather, Henry Hirsh, started the business as a small folding carton company in Newark, N.J.. Her father, Charlie, joined him in 1950 and took over in 1964 when Henry passed away. In the 1970s Charlie was instrumental in instituting the “litho-laminated” process used to make the company’s current boxes. Lisa joined the company after college in 1982.

Around that time, the company moved to Paterson, Lisa and Mark married, and her father asked his son-in-law, who was working in advertising sales in New York, to join them. Today Charlie is mostly retired, but he still has a desk in her office and serves on the company’s advisory board. Lisa, Mark and Samara are the only shareholders.

In the mid-1990s, Accurate Box ceased manufacturing folding cartons and started focusing more on the high graphics corrugated part of the business, now the company’s niche. Lisa became president and CEO in 1997. A big impetus to the growth of the business is that it has continually reinvested in new machinery and equipment — printing presses, die-cutting machines and two robotic systems in the finishing department, for example.

“Our competition may be integrated companies that have their own forests and make their own paper, but we’ve invested in the machines that can handle the burden of work we demand of them,” Hirsh says. “Because of that, we’re making, printing and gluing boxes much faster every hour. Everything about our operation is pretty much new and enhanced, which gives us an advantage.”

Passing the baton
When Lisa took over, Accurate Box was certified as a woman-owned business. She says certification has given the business an edge. “Now that companies are looking to promote minority- and women-owned businesses, we still need to be competitive and make a very high-quality product, but some of our customers see having a supplier with this designation as an advantage,” Lisa says.

Having her father as a mentor was also valuable. Charlie was a great teacher, Lisa recalls, especially in stressing that she and Mark needed to be involved in every aspect of the business. He also taught them to learn from their mistakes. “He also stressed not to do things a certain way just because we always had,” she says. “That was never his way, which was tremendous for both Mark and me. Dad also could have written a book about succession planning and how to transfer decision making and not meddle.”

However, Lisa notes, Charlie came from a generation that believed the business leader had to have all the answers and make all the decisions. “Being a woman and coming from my generation, I wanted a more collaborative style of management. So in the 1990s, we started putting teams together to solve problems, and insisting on total quality management, including lean manufacturing. I brought in an outside consultant to help us with those.”

That person was also a mentor for a time, as well as a few others, Lisa says. “Before I reported to my father, I had both good managers and bad, and you learn from both.”

Recently, partly because of Samara’s entry into the business and the company’s growth, Accurate Box started an outside advisory board. “It’s a more formal governance process, and even though we’re still making the final decisions, it’s really nice to have other heads in the discussions and the decision making,” Lisa says. The couple’s older daughter, Jenny, 34, who lives in Boston and is in a different business, also serves on the advisory board. “It’s been nice to get her involved, too,” Lisa says.

The company, which recently doubled its headquarters space, celebrated its 75th anniversary last year. Accurate Box has also received a number of awards. Lisa Hirsh was honored with Ernst & Young’s New Jersey Entrepreneur of the Year award for manufacturing in 2001 and the STEP (science, technology, engineering and production) Ahead Award from the Manufacturing Institute in 2016. The company was recognized with a Top Workplaces honor in 2019 by NJ.com.

Patricia Olsen, a frequent contributor to Family Business, writes the magazine’s “At the Helm” column.