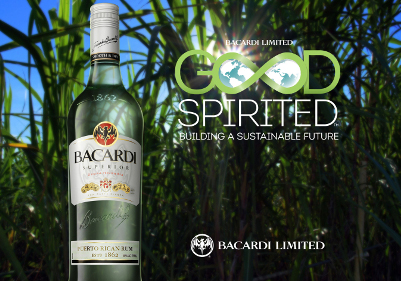 Bacardi Limited, the 156-year-old family-owned spirits company, regularly seeks input from stakeholders to find out what they expect from the brand.

It was feedback from stakeholders that made the company step up its environmental game. The business was working on sustainability efforts, but more needed to be done, plus, not enough people knew what was in the works.

So Bacardi launched an initiative called “Good Spirited” in 2014 and set goals for 2017 and 2022. The company reported this week that most of the 2017 goals were met. In addition, Bacardi is raising the bar to align its goals with many of the United Nations Sustainable Development Goals.

Being able to establish and mobilize sweeping changes quickly is an advantage to being a private, family-owned business, say Bacardi officials.

“If I talk to one family member, he will know the family member in the generation before that supported the business. It’s having that long-term view and passion for the company. They want the company and legacy to continue for the Bacardi family and the grandchildren.”

There’s technology behind the results in some cases, but mostly it’s the people who make a difference, Wilson says. The owners as well as employees are motivated by the idea of legacy and giving back to the community and customers, according to Wilson.

“It’s about the focus, passion and commitment of our people who work in these areas,” he says. “The operational team members, producing the products, procuring the materials, things like that. It’s the desire, passion, focus on what’s right and what’s doing better. You can’t necessarily do every single thing, but we are constantly challenging ourselves on how can we take it to that level while staying in business.”

And employees know they can go to management and make a change, like eliminating plastic straws from their sites before it became the trend in environmentalism. Anyone in the company can be deemed a “green champion.”

All things at the company, Wilson says, are built on three pillars: fearlessness (to have courage and feel empowered to take risks for the good of the business); founder’s mentality (to have an agile entrepreneurial mindset and a sense of urgency); and family (to work as a team where everyone is respected and heard). Employees are introduced to these principles during onboarding and regularly reminded about them. Through its values, a family-owned business is uniquely armed to make a difference in the environment, Wilson says. 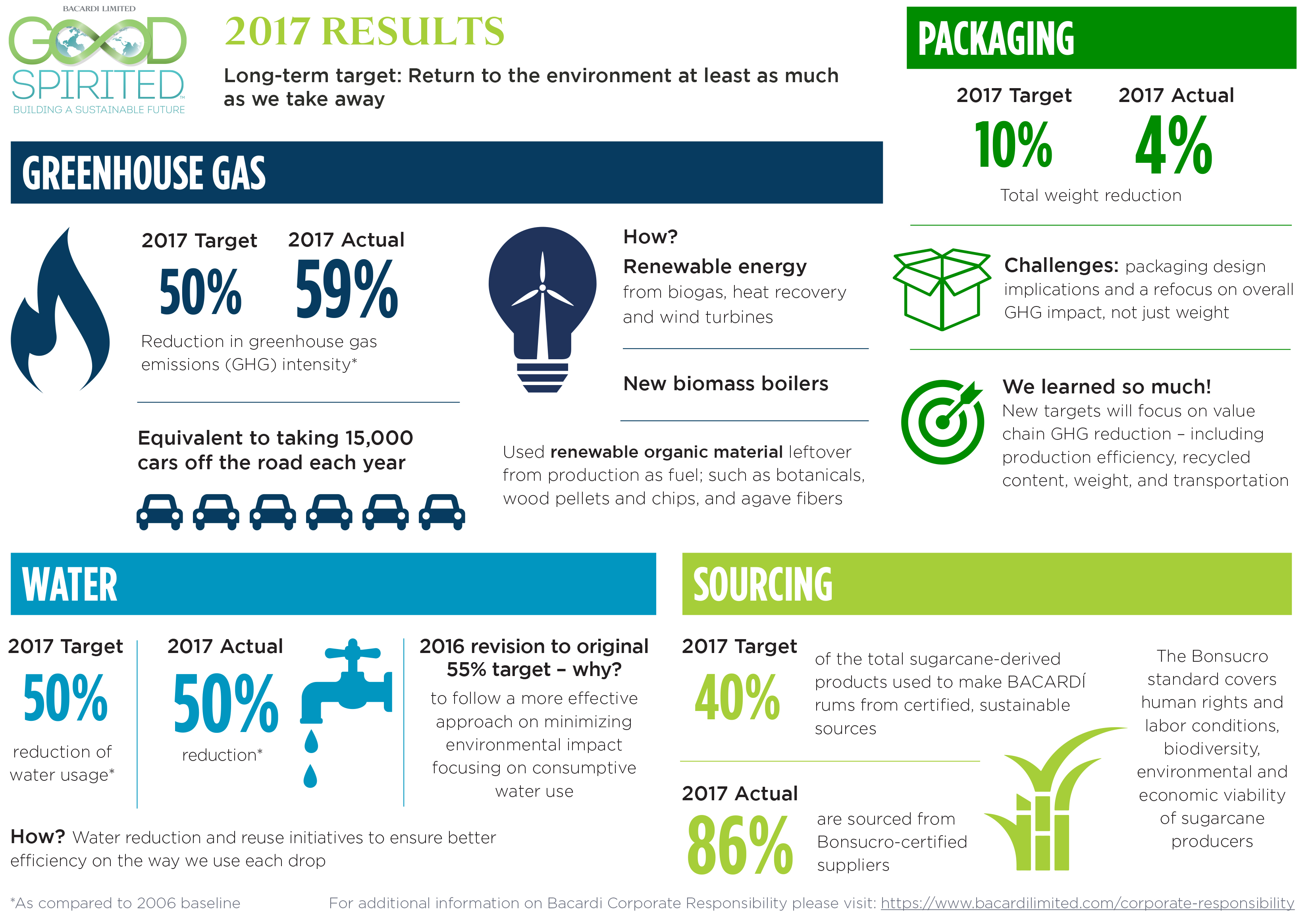 Here are some of the major results of the Good Spirited update:

•          Greenhouse Gas (GHG) Emissions: Bacardi cut GHG intensity from manufacturing operations in half more than a year earlier than its 2017 target. At the end of December 2017, the reduction was 59%, compared with the 2006 baseline. This reduction is equivalent to taking 15,000 cars off the road each year or reducing oil use by 165,000 barrels annually. Hundreds of initiatives implemented globally at Bacardi distilleries, bottling lines, visitor centers and offices for energy reduction were part of achieving this reduction.

•          Water Usage: The target of 50% reduction in water use by the end of December 2017 compared with the 2006 baseline was achieved. Projects such as water reduction initiatives and water reuse were implemented across operations to ensure more efficient water usage.

•          Packaging: Despite efforts to reduce GHG through glass weight reduction, Bacardi was not able to meet the 10% packaging reduction goal between 2008 and 2017. As of the end of December 2017, the reduction was at 4%. This missed target was mainly driven by two factors: new packaging design implications and a refocus to overall GHG impact instead of only weight reduction.

•          Sourcing: Bacardi works with suppliers and industry groups to ensure all suppliers achieve certification to the Bonsucro standard covering human rights and labor conditions, biodiversity and environmental and economic viability of sugarcane producers. As of the end of 2017, 86.3% of sugarcane-derived products used to make Bacardi rums were sourced from Bonsucro-certified suppliers, ahead of the original 2017 target of 40%.