The Merrow family of New England have altered their business over the centuries, from a general store to a gunpowder maker to a sewing machine manufacturer to a maker of technical apparel. During the COVID-19 pandemic, the 182-year-old company has shifted gears to increase its production of personal protective equipment (PPE).

Joseph Merrow started making gunpowder in Connecticut, 24 miles from Hartford. After his powder mill was destroyed in an explosion in 1837, he built a knitting factory and started turning out knit cotton goods in 1838.

In 1868, the founder’s grandson Joseph Millard Merrow developed the Merrow Crochet Machine. After the factory burned down in an 1887 fire, the company pivoted again, moving to Hartford and focusing on overlock sewing machines. The company expanded its line of industrial overlock sewing machines, used to overedge fabric and add decorative edging. The business was renamed the Merrow Machine Company, and Joseph Millard Merrow became a major figure in the textile industry. 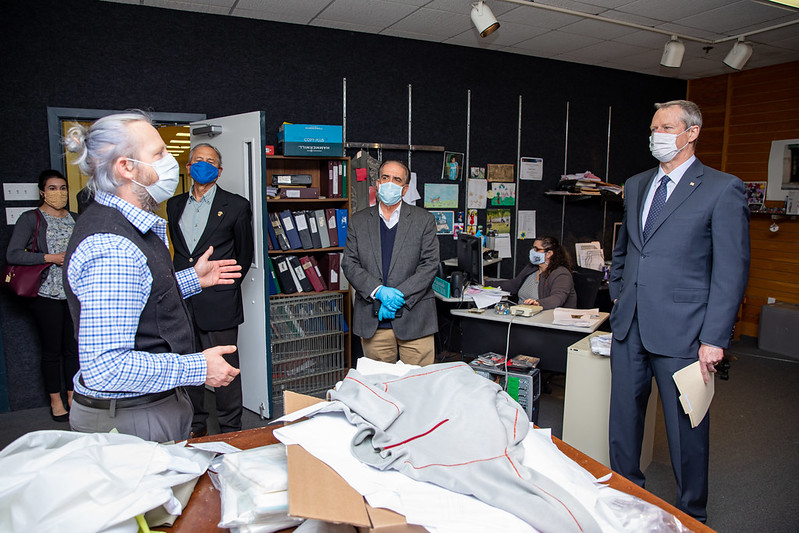 In 2004, eighth-generation brothers Owen and Charlie Merrow bought the company and moved it to Fall River, Mass., where it operates in a 300,000-square-foot building. Merrow Group now encompasses several companies that specialize in making sewing machines, contract manufacturing of technical soft goods and fashion design and development.

During the COVID-19 pandemic, the enterprise is playing a crucial role. It has hired more workers and increased its production of medical protective equipment, which it’s selling to hospitals, healthcare networks and local government systems.

Merrow has received funding from the Massachusetts Emergency Response Team (MERT) to support expansion of its production capabilities to meet the urgent demand for PPE.

“Merrow was one of the first companies to pivot their operations during this extremely critical time,” says Carolyn Kirk, executive director of the MassTech Collaborative, the agency heading up MERT. “Merrow quickly ramped up production and is now producing gowns that provide critical protection for our frontline healthcare staff and first responders. We’re grateful to Merrow and the other companies the MERT has assisted, as they provide reliable, local sources of PPE and other critical supplies that are undoubtedly saving lives.”

“We are working 18-hour days and sending out dozens of shipments,” Merrow says. “Nonstop, truck after truck pulls up to the loading dock getting PPE, but it’s never enough.” You can hear the frustration in his voice as he says that they could do more, but because of plant closures, supply chain markets are fluid. Merrow says he ordered a million yards of fabric but found out it was sold to someone else for more money.

His goal is building a supply chain to support the entire country, and he’s experimenting with different ways to scale up. Merrow is now shipping to 16 states. In addition to gowns, the company is making other essential medical products, such as surgical caps and gaiters.

“This is the most difficult professional time of my life, but I’m proud of the way the company has been able to execute,” Merrow says.

Lisa C. Johnson is a writer based in Massachusetts.