The ambitions of the Dickey family have fueled the exponential growth of Dickey's Barbecue Restaurants Inc. The family's willingness to redefine the company's business model made the expansion possible.

Three generations and 76 years after the first Dickey's Barbecue Pit opened in a tiny location north of Dallas, the company is now the largest barbecue chain in America. The original store still operates as part of the chain.

"Roland Dickey Sr. literally took his father's business and built a chain," explains Laura Rea Dickey, his daughter-in-law and CEO of Dickey's Barbecue Restaurants. "The third generation has taken that foundation and scaled it and made it relevant to today." Since taking over from his father in 2006, her husband, Roland Jr., has expanded the company from 20 locations to more than 600, and there's no holding him back now.

Laura, 37, works with Renee Roozen, formerly a regional VP, who took over as president of the chain. Roland Sr., 71, remains chairman. The management reorganization widens the opportunities for further growth, including international expansion and the creation of other operating companies.

"In addition to our manufacturing and technology expansion, we are working on new concepts in the fast-casual restaurant space," Roland Jr. explains. "We are working on a few new concepts, both through acquisition and new concept development. Dickey's Barbecue Restaurants Inc. is growing rapidly, and we anticipate that continuing, especially with our plans to expand internationally in 2017. Dickey's Capital Group is growing in tandem."

The company has come a long way from the original location that Roland's grandfather, Travis Dickey, opened in 1941. The restaurant served low-smoked barbecue with potato chips on the side and offered beer, milk and soda to drink. A sign on the building was rented to Dr. Pepper to help cover start-up costs. Travis handled food prep while his wife, Ollie, served the customers and kept the books. The menu has expanded somewhat today, but each restaurant still slow-smokes meats on-site the same way Travis did. 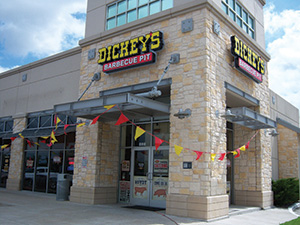 When their father passed away in 1967, Roland Sr. and his brother Travis Dickey Jr. ("TD") pitched in to help their mother. "At the time, I was at SMU [Southern Methodist University] finishing my senior year and my brother TD was an architect," Roland Sr. says. "I thought jumping in to run the restaurant was temporary and that I would go on to law school as planned. Instead, we ended up making that little barbecue joint two restaurants, then three, then a catering business and more."

The "more" came about in 1994 when the first franchise was sold. Frank Smith, a Dickey's customer and local Dallas restaurant owner, convinced the Dickeys to sell him a franchise to diversify his other food service holdings. "His son, Dale Smith, is still a franchisee and has expanded to own five restaurants," Roland Sr. says. Other franchisees followed. "We focused on expanding in the Dallas-Fort Worth metroplex, where folks knew the brand and the barbecue," he explains. "We didn't begin really expanding much out of Texas until Roland Jr. joined the company."

That happened officially in 1999, although Roland Jr., like his father, grew up in the restaurant business. "When I was a kid trying to have a summer riding my bike with my friends, my dad would take me to work with him," Roland Jr. says with a laugh. "When I was 9, he had me making potato salad and washing dishes and busing tables." As a teenager, Roland Jr. was promoted to slicing brisket. After college, he worked in operations for other fast-casual chains before returning to Dickey's as a manager. He was named CEO in 2006.

More changes followed. Roland Jr.'s wife, Laura, joined the company formally in 2008. "It was a difficult time in the economy, and it was very much 'all hands on deck' to figure out how we could weather the recession and build sales without sacrificing the brand," she says. "We scaled down the restaurants from the big, 3,500-square-foot dinner house to a more streamlined, fast-casual serving style rather than a buffet. That allowed us to make more efficient use of the space." There were about 200 stores in the system at that time.

Ownership was consolidated in 2011, when TD Dickey passed away and Roland Sr. bought out his brother's interests. Today, the company is fully owned by Roland Sr., Roland Jr. and his brother Cullen, and their wives. They also constitute the board of directors. Cullen, 40, owns an independent real estate firm that sometimes advises the restaurant company, but isn't otherwise active in the company.

Roland Sr. today serves as the public face—the "Colonel Sanders"—of Dickey's, according to his son. He travels frequently to visit owner/operators for grand openings and anniversary celebrations and appears in cooking segments on local TV stations.

Meanwhile, franchising continues to drive growth. "We have new people joining our system every month," Roland Jr. points out, "but more than half our growth is from existing owner/operators and their families opening more stores. That's our No. 1 barometer of success." 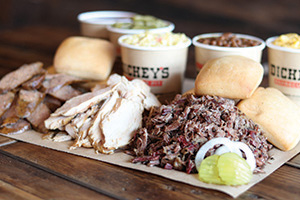 Many of the franchisees are family businesses as well. According to company president Renee Roozen, there are currently 382 different franchisees, the overwhelming number of whom own and operate a single location. Many of them have close relationships with the Dickeys. "The family travels to the stores," Roozen says. "I continue to be amazed when I talk about some single-unit operator in Smalltown, USA, and they come back with the history of where they opened, who was involved, what they did. It means something to them."

Roozen believes family involvement has been crucial to the company's success. "No one is going to care more than someone whose name is on the outside of the building," she says. "The Dickey family is very involved. They care innately. They take the success of every store very personally."

Laura says family ownership is an important factor in the owner/operator relationship, as well. "For franchisees, there's an authenticity to being a true family brand," she says, "with two of the three generations there to talk to about business development and struggles and various personal business choices."

"These aren't gazillionaire international conglomerates buying Dickey's franchises," Roland Jr. explains. "It takes the right kind of owner/operator to be engaged hands-on on a daily basis. That's the way the family has always been, and we ask the same thing of them." That's not to say all the franchisees are mom-and-pop operations. A big leap forward came in 2014 when the company struck a development deal with two former Kentucky Fried Chicken franchisees and their partners to open 100 new stores in California over 10 years.

The system is adding roughly a store every week now. While the company doesn't discuss revenue figures, industry sources estimate systemwide sales of around $500 million, and Roozen says the franchisees employ roughly 8,000 people. There are about 200 corporate staff members. FastCasual.com put Dickey's in first place on its list of "Top 100 Movers and Shakers" and the company was recognized for the third year by Nation's Restaurant News as a "Top 10 Growth Chain" and by industry research organization Technomic as the fastest-growing restaurant chain in the country.

The Dickeys aren't about to rest on their laurels, however. The management reorganization allows Roland to concentrate on expansion and development of other opportunities while Laura and Roozen grow the restaurant business. The Dickey's Barbecue Restaurant office is located in Dallas. "Marketing, training, operations and communications are about nothing but Dickey's," Roland says. "They have just one mission: Make our brand great." 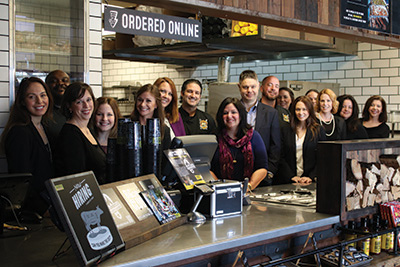 "With Renee's operating background and mine in strategic marketing, it's a good partnership," Laura says. Her background was in marketing and technology, and she served as the company's chief information officer for several years before assuming the CEO's role. Before joining Dickey's, Roozen was VP of operations at Famous Brands International, parent of the Mrs. Fields Cookies and TCBY brands.

DCG, the holding company that Roland heads, was created to expand and diversify the family's holdings beyond the original barbecue concept while supporting and streamlining restaurant operations. "As we got bigger, we wanted to pull professional services out and make them a separate company," he says. "That's finance, HR, legal and other things that aren't specific to Dickey's. They have their own office in Plano [a Dallas suburb] and provide those professional services for all the companies in addition to Dickey's."

Those other companies currently include Wycliff Douglas Foods, a food manufacturer and distributor that supplies Dickey's as well as other companies, and a 22-person technology business, Spark Intelligence, which, according to Roland, "provides restaurant technology from enterprise management to online ordering as well as point of sale." Both firms serve the Dickey's franchise system but are expected to grow and serve other restaurant chains as well. There are other assets, including some real estate holdings, and some minority partners, but "all of the companies are either wholly owned or majority controlled by DCG," according to Roland. Under development are plans to create and/or acquire new fast-casual restaurant concepts.

On the front burner right now is international expansion. "We had shied away from international growth as we built a strong domestic footprint," Roland says. "But we decided this is going to be the year we finally go international. We receive two or three inquiries a day about it. We're putting the infrastructure in place to grow and manage that in a healthy way. We expect to build a big brand and build it right."

Asia and South America are current targets, Laura reports. "There are active talks with investor groups that we hope to announce in 2017," she says.

Continued family ownership is key to the plans. "We want to be nimble, responsive, lean and smart," Laura says. "Because it's an extension of the family, we can avoid the traditional company mindset with a level of bureaucracy. With just a couple of folks in the decision-making circle, you have a lot of career opportunity, mobility and access." She adds an important caveat: "Being a family brand with history matters some, but where we're going matters as much, if not more."

That's also why "we plow back heavily and invest in ourselves," Roland says. "We're not beholden to Wall Street or private equity owners. We can run this company the way we want and build net worth for our owner/operators. Our growth is just a byproduct of making them successful."

Laura and Roland Jr. don't have children now. Cullen has a 3-year-old son, Warren. Given the third generation's ages, succession planning is on the back burner. They are determined to keep Dickey's a family business, however. "I can't foresee a future where the business isn't closely tied to the family," Laura says. "On the other hand, we have to look at succession planning in a different way, for the long-term continuation of the brand, as sometime in the future someone without the last name Dickey will hold the position of CEO. If Warren is interested in the family business, he would work outside the company successfully before joining the team, as all family members do, and that likely [entails] a gap. So we have to be good stewards of the brand and plan for that."

"I see Dickey's future as bright and staying a family business," Roland Sr. says. "We have folks offer to buy us out often, from other national brands to private equity, and right now we're happy staying the course."

"We never want to give up control," Roland Jr. says. "This is our identity. It's more than just a business, and we love it."