For the Trefethen family, life is good and the wine is great. But the road to success has has its share of challenges

For most visitors to the Napa Valley, Trefethen Family Winery is the welcome wagon, the first winery they see as they drive north from San Francisco and points beyond. 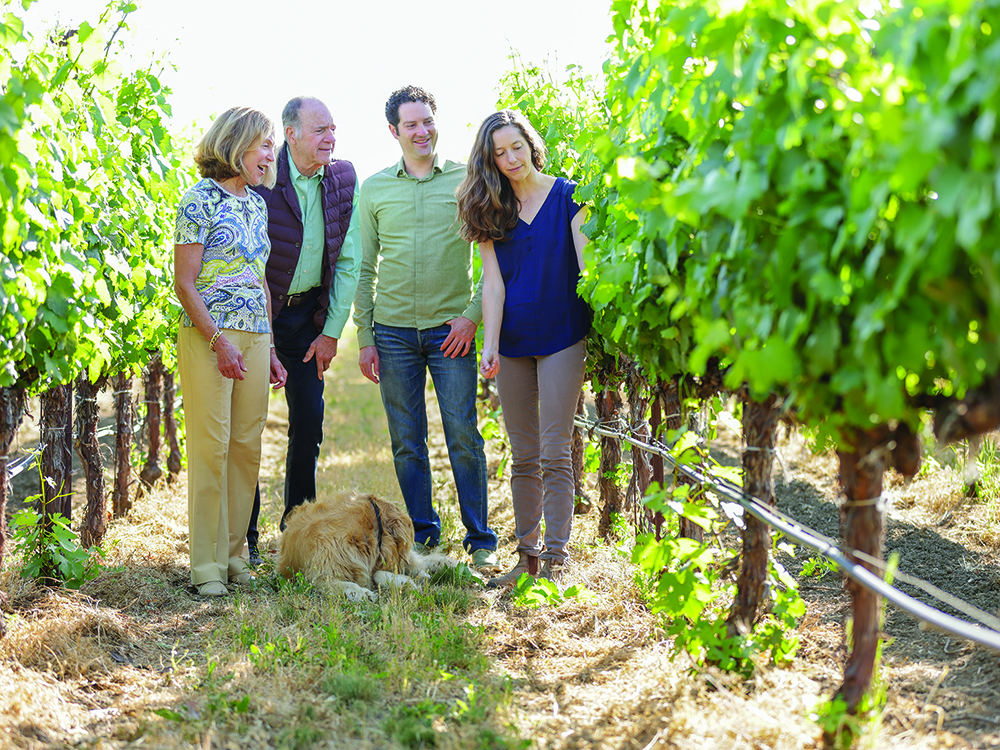 From the main Highway 29, which is to the west, rows of vines stretch eastward like green corduroy, a seemingly endless linear vision quest. Here, on this 400-acre parcel in the heart of the Oak Knoll growing area, sits one of the oldest and most successful family-owned and family-run businesses in the region.

Trefethen was a family operation from the very beginning. In the early 1970s, John Trefethen’s parents, Eugene and Catherine Trefethen, passed the winery along to John and his wife, Janet, who ran it for more than three decades and grew the small-but-mighty business into a local powerhouse with national distribution and a penchant for customer service.

Fast-forward to recent years, when John and Janet repeated history and passed the business down to their children: 34-year-old Hailey and 38-year-old Lorenzo. Today, the duo is poised to build on the family legacy and take the company into the next decade and beyond.

Along this multigenerational journey, the Trefethens have stayed true to one thing: Each other.

“One thing we’ve always done a good job with around here is keeping everything about the family,” says Hailey. “Yes, we’re running a business. But we’re also running a family. The two can coexist.”

Technically speaking, the modern era at Trefethen began on the night of Aug. 24, 2014. That night, a 6.0 earthquake — the largest in the Bay Area in nearly 25 years — rattled the southern part of the Napa Valley and wreaked havoc on structures all over town. At Trefethen, the worst damage occurred at the vineyard’s iconic, 131-year-old McIntyre winery. For decades, the structure, which is listed on the National Register of Historic Places, operated as the heart of the winery; now, it was teetering on the edge of collapse.

Miraculously, the quake didn’t level the building. It did, however, severely compromise the winery’s integrity, causing the upper stories to lean 4 feet to the west.

Suddenly, the Trefethen team — including the four family members, CEO Jon Ruel (we’ll come back to him) and winemaker Brian Kays — faced an almost overwhelming crisis: Could the building be saved, and was it worth trying to save it?

After a series of emergency meetings, the family and Ruel decided to restore the building. They tabbed then-28-year-old Hailey to oversee the process, although she had no experience managing a project of this magnitude. The team felt that Hailey’s solid understanding of how the company worked and passion for the historic building, as well as her role in Trefethen’s new sustainability programs, would serve her and the winery well.

“It was a bit of a crash course in architecture, engineering, and historic preservation,” Hailey says. “In many ways, I was learning as we went along.”

Over the course of more than two years, the old building received a top-to-bottom makeover: new walls, new insulation and waterproofing. Most significantly, engineers installed what is called a moment frame — 20 tons of steel beams that bolstered the building to prevent damage from future quakes.

When all was fixed, once Trefethen revealed to the world McIntyre 2.0, the kids stepped into new roles. Hailey followed in her father’s footsteps, focusing on taking over operations as well as improving the winery’s environmental impact. Lorenzo took on more responsibility in sales, marketing and everything in between, with mom Janet as his mentor.

“We like to say that as far as family involvement with the winery is concerned, Hailey handles everything from dirt to bottle and I handle everything from bottle to table,” Lorenzo says. “We each have our roles.”

Janet and John formally started stepping aside in 2015 and wound down their time at the winery by 2018-2019. Since then, the Trefethens have established a new cadence.

The new routine includes monthly and quarterly meetings with all four family members and Ruel, who has worked for the family since 2004 and was elevated to the C-level in 2010. The five of them discuss a range of topics, such as finances, HR issues, recent press and status reports from the vineyard.

“It’s ‘retirement light,’ ” Lorenzo jokes about his parents’ current schedules and pastimes. “They’re more comfortable leaving for extended periods of time and enjoying not having to run the day-to-day anymore.”

This arrangement didn’t happen overnight. Sometime around 2015, the four Trefethens called in a consultant from New York to help them make sure they were all on the same page. The consultant handed out index cards and implored family members to work independently and write down three things that were important to them. Without equivocation, all four wrote the same three things:

As part of that process, family members put into words their company values and a mission statement. All four of them contributed. All four had a say. In the end, the list contained words and ideals such as Family, Respect, Authenticity, Joy, Sustainability and Learning. This became a sort of theoretical roadmap for the future.

Hailey and Lorenzo also codified a plan for handling disagreements. The two agreed to a standing meeting every Monday afternoon — a meeting during which the two of them can discuss anything pertaining to the business, big or small.

“We’re talking more now than we ever have,” says Hailey. “We’re in such close coordination that we’re talking about issues before they become problems, which is huge.”

When issues do become problems, the two hash them out openly, honestly and with respect.

Putting a label on change

Perhaps nothing demonstrates the Trefethens’ commitment to working together like the label redesign the winery engineered in 2020.

The labels really had not changed much in 50 years, but Lorenzo and Hailey felt an update that commemorated the transition in leadership was needed.  “For Hailey and me, it was important that we were able to project in a concrete way the changes that had taken place,” Lorenzo explaines.

When the duo took their plans to their parents, Janet and John scoffed.

For John, the move simply didn’t make sense: If nothing was broken, why mess with it? For Janet, the issue was much more emotional; it was as if her children were actively destroying something she had spent portions of her career to build.

“I did our first label, so when Loren said [the kids] wanted to change it, I wasn’t excited about it,” Janet says. “That label was a part of everything we had built. I was apprehensive to change it, to say the least.”

The kids vowed to respect their parents’ point of view and continued with the project. They told designers they wanted something that reached back into the past to define the future. They said they wanted a new label that emphasized sustainability. They acknowledged they didn’t want to erode brand recognition. And they kept their parents involved in the decisions throughout.

Over the course of weeks, Lorenzo and Hailey reviewed dozens of designs. In the end, they didn’t like any of the new designs, and pivoted back to one that evoked labels of old. The resulting choice ended up making both generations happy, solving the problem the redesign created in the first place.

The new design also incorporated an element from the original labels — a signature leaf. On the new bottles, the leaf adorns the foil wrapper near the top.

“We landed in a place that everyone lived with,” says Hailey. “Today I think our brand is stronger for it.”

Janet agrees, adding that the new label is “theirs but ours as well,” signifying the perfect bridge between generations.

“I was thrilled when they went back to something like the original label that I had come up with in the 1970s,” she says. “I like to think it represents the four of us. It’s a nice combination of what we all wanted. It represents the way you hope families in business together solve issues.”

As the world comes out of the COVID-19 pandemic, Lorenzo and Hailey Trefethen plan to approach the 52-year-old business the same way their parents and grandparents did: as a startup.

This means juking and jiving and improvising as necessity dictates. And learning along the way.

The duo believes they have complementary skill sets for the journey in front of them — Hailey sees herself as more grounded and circumspect, while Lorenzo considers himself more of a dreamer and big-picture thinker.

Of course, this doesn’t mean they won’t innovate.

Hailey, for instance, has spearheaded Trefethen University, an attempt to build camaraderie among employees by making sure everyone in the company has respect for the jobs everybody else is doing. Under this program, workers from a variety of different departments take turns learning critical functions such as pruning, blending, and hospitality.

The program normally takes place in person, but during the pandemic, it operated on Zoom — a sign that the new stewards of the Trefethen brand are committed to inclusivity.

“What we’re doing isn’t only about the customer-facing part of this brand, it’s about how we represent ourselves to the employees, too,” Hailey says. “No matter how big we get, no matter how much we grow this company, we can’t forget about the people who helped us get there.”

Both Hailey and Lorenzo became parents during the pandemic, which means eventually they likely will pass along the business to yet another generation of Trefethens.

The way Lorenzo sees it, he and his sister will lead by example, through passion.

“Our parents never pressured us to take over the family business, and I don’t think we’ll pressure our kids, either,” he says. “This was just always part of lives. It’s a great life. [My sister] and I recognized that at an early age. Hopefully [our kids] will see it too.”

Matt Villano is a writer and editor based in California Wine Country. Learn more about him at whalehead.com.