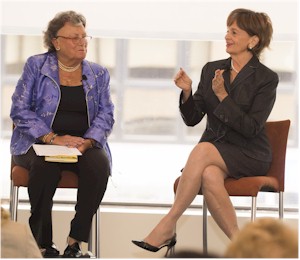 Marilyn Carlson Nelson -- retired chairman and CEO of Carlson, the global travel and hospitality company -- learned many lessons about business from her father, Curtis Carlson, the company’s legendary founder. One of the most memorable, she told a roomful of female family business stakeholders, occurred when he told her to fix Sunday school.

Curtis Carlson delivered the advice in the family car on the way home from church. Nelson, then 12, announced that she no longer wanted to attend Sunday school. “It was boring,” she recalled. She was unhappy not only with the dull curriculum, but also with her classmates who relieved their boredom by acting out. “Boys were throwing spit bombs, and people were coming in the front door and going out the back door to the Dairy Queen,” she explained.

Carlson was not pleased with his daughter’s announcement. “He pulled the car over, pointed at me -- he had kind of wide, short fingers -- and said, ‘If you don’t like it, fix it!’ And when we got home, I had to go to my room and make a list of how to fix Sunday school,” Nelson told the WCD attendees. Her mother drove her to meet with the Sunday school superintendent. The experience, Nelson recalled, was “a lesson in change management, and what one person can do.”

To her surprise, the superintendent took her concerns seriously. He suggested that she help him form a group of disaffected students, including some of the boys who had disrupted the class. “And we fixed Sunday school,” Nelson told the WCD participants triumphantly.

Nelson was fielding questions on the podium from Susan Stautberg, WCD’s co-founder, co-chair and CEO. The family business event was held at the offices of advisory firm KPMG in New York City. Later, Nelson received WCD’s Award for Strategic Leadership. (Family Business Magazine profiled Carlson, which in 2014 reported system-wide revenues of $35.2 billion, in our September/October 2013 issue.)

In the interview with Stautberg, Nelson shared several stories about her father, an old-school business leader who did not name his daughter as CEO until 1998, the year before he died at age 84. Curtis Carlson “was absolutely unabashed about his disappointment” that he did not have any sons, Nelson said. “I often thought of myself as ‘first daughter, only son.’ ” (Nelson’s younger sister, Barbara Carlson Gage, heads the Carlson Family Foundation.)

As a child, Nelson recalled, she identified strongly with her father and his love of business. “Every night he’d come home, and it kind of bored my mom and my sister, but I was at his knee.” Starting in her childhood, her father would ask her for her thoughts on his upcoming sales presentations. “He would often tell me that he won the sale, and it was my idea that did it,” she said. “It was wonderful being conditioned right from the beginning [through] a little bit of reward and recognition.”

Carlson set high expectations for his daughter, pushing her to strive for an A rather than an A-minus, and to run for president of an organization rather than vice president. He taught his daughters the importance of conserving cash to invest in the business and insisted that Nelson take an economics course at Smith College.

Though he remained at the helm of his company into his 80s -- a tenure much longer than family business advisers would recommend -- Curtis Carlson “became a student of family business,” his daughter said. He created “a transparent board” that included three independent directors. Today, three board members elected by Nelson’s family and three elected by her sister’s family serve alongside the three independent directors, “the idea being that if the two families vote together, that will carry the day.”

When Carlson finally decided that Nelson would be his successor, he took subtle steps to ensure the organization would accept her. One day, claiming that he didn’t feel well, he announced that his daughter would chair a meeting of the capital allocation committee, one of the board’s most powerful committees. “And then the next time, the word just came down that Marilyn will chair the cap ex committee,” Nelson recalled. “Then the next thing I knew, he said, ‘Marilyn, you’ve got some issues you want to talk about, you chair the executive committee.’ ”

Her experience as the heir-apparent-in-waiting guided her in developing her own exit plan, Nelson told the WCD audience. “I think for the family it becomes almost really traumatic if you think the next family member’s going to stay till they’re 80 or 85,” she said. “So I agreed when I took the job that I would stay ten years -- unless, of course, they invited me to leave sooner.” She chose the ten-year period, she said, because it would enable her to have an impact through two five-year strategic planning cycles. Nelson’s daughter Diana Nelson is now Carlson’s board chair.

“My dad talked all the time about how few companies make it to the third generation,” Nelson said. As a tribute to her father, “when I retired from our board, just a few months ago, I sort of verbally expressed a letter to my dad,” noting that she had successfully passed the torch to the Carlson family’s G3. The older members of the fourth generation are now attending the company’s strategic retreats, she said. “It’s not clear if [any of them] will work in the company or not, but they’re very involved in stewardship of the company and have high expectations and hold the company accountable.”