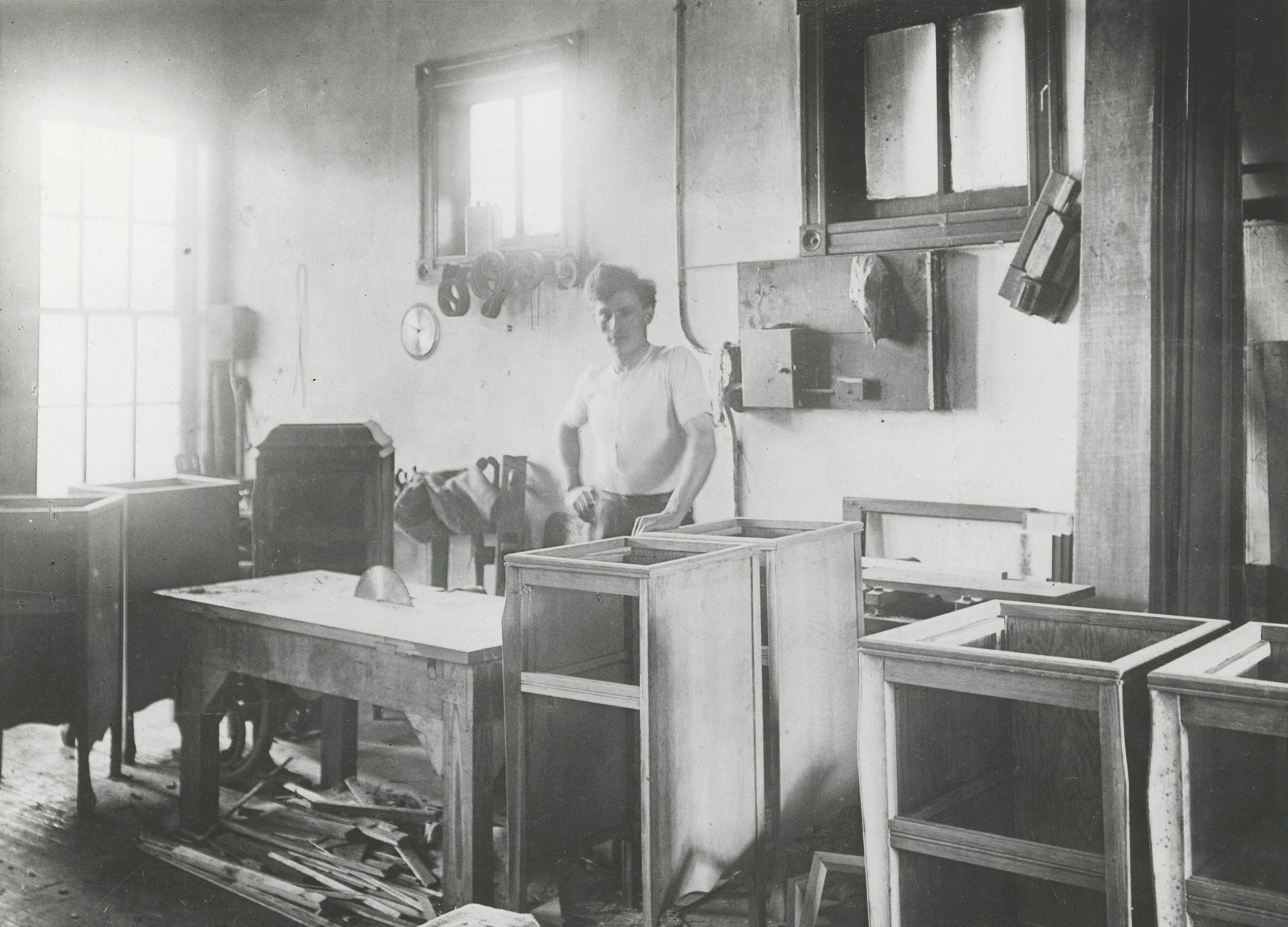 Robert Pasin is as animated as he is playful — because who wouldn’t be in his situation? You might say he’s hitched his wagon to that sense of creativity and playfulness. The company’s culture reflects his optimism. He is thoughtful and considerate of his family’s legacy and history. But he is fearless in recounting the challenges, pivots and failures the company has made. He’s a great interview because his excitement is contagious — and his honesty is disarming.

As he explains it, he learned on the job and in real time. His first day as a 23-year-old sales manager was all about learning the business. And learn he did — about the struggles the company faced.

“My father is an informal guy,” Pasin says. “Once I started working at the company, if there was something going on he thought I should know about he would say, ‘Hey, Robert, learn from this, go sit there.’” So it was not unusual when that day, his father suggested he meet with a man from the bank who had come to help them.

It turns out Jerry was a bank-appointed turnaround expert, and Pasin had no idea why he was there. They sat across from each other in a conference room. “He blasted me. ‘You have no cash!’ he yelled, over and over,” Pasin recalls.

The naïve NextGen asked, “How much are you supposed to have?”

The turnaround adviser, Pasin recalls, “was trying to shake the system, like, ‘Hey guys, you are really in trouble.’

It was the wake-up call that started Pasin on the path to rescuing the company. In all, it took a combination of entrepreneurial thinking, operational changes, and rebranding over roughly 10 years to achieve a total overhaul. Along the way, Pasin managed to get an MBA at the Kellogg School of Management at Northwestern, which helped him “be a better critical thinker and reduce complicated problems down to the elemental facts,” as he told his alma mater in an interview.

In the beginning: Little wooden wagons

Antonio Pasin, Robert’s grandfather, emigrated from Italy to the United States in 1914 at age 16 and worked day labor jobs until he had enough money to open a workshop in Chicago to build phonograph cabinets. His father and grandfather had both been carpenters. Antonio  also made wooden wagons, which ended up selling better than the cabinets. In 1927 he created an affordable steel wagon, which he named Radio Flyer.

By the 1930s the company, then called Radio Steel and Manufacturing, was selling more toy wagons than any other company. The Chicago World’s Fair made the wagon even more popular. The company developed more wagon models, and in the 1950s still others, as well as a scooter.

The business was on a roll; the “little red wagon” was evolving into something bigger than itself.

The company also got creative in its marketing, adding specialty models with names of TV shows and movies. It was still experiencing copious success, and in the 1960s, upped its marketing style with vibrant ads to keep pace with the zeitgeist and the advertising milieu.

Robert’s father, Mario, took over in the 1970s, designing still more products, like a motocross bike, and developing partnerships with kids’ TV shows and brands. He even produced a movie depicting the famous first little red wagon. In 1987 the company officially changed its name to Radio Flyer.

All was not as good internally as it appeared to be, however. By the time Mario’s two sons joined in the 1990s, Radio Flyer faced numerous problems. (Pasin says his brother Paul, who became COO, was his “key partner” for 20 years before he retired.)

Competition had become a problem; a number of other companies were selling plastic wagons. Radio Flyer’s product development strategy was still focused on what the company could make out of steel in its factory, instead of considering the customers’ wants. The two engineers on staff knew about working with steel, but nothing about molding plastic. The company’s Town & Country wooden wagon was still popular, but Robert Pasin knew Radio Flyer had to add plastic wagons fast.

Rethinking the wagon (and the business)

In addition, Pasin started asking people about their experiences with the company’s products, especially the iconic red wagon, which in turn led to a new level of branding. (Another story he tells involves the time he asked customers what was favorite Radio Flyer product was. One parent described a red tricycle in detail, which illustrates how much the brand meant to people: Radio Flyer didn’t even manufacture a tricycle. As a result, the company got to work on developing one, which became a leader in that market category.)

As part of his plan to rejuvenate the family business, Pasin replaced much of the staff with new talent and began prototyping ideas — a first — before manufacturing new lines. He kept the best of what people had always identified with the brand — the nostalgia factor — but innovated in every area. And very important, he told the Young Presidents Organization, was taking “the fear out of failure.”

If you’re only familiar with Radio Flyer’s classic red wagon or the Town & Country model, you’re woefully behind the times. Besides tricycles and wagons, today the company manufactures scooters, battery-powered ride-ons, and several Flyer electric bikes and scooters for adults. It has also partnered with Tesla to make a line of kids’ vehicles with the company, as well as a cyberquad (ATV) for kids.

In 2017, Radio Flyer marked its 100th anniversary as quite a different company than it was in earlier decades. Pasin has successfully married the idea of having an iconic product line that is also state-of-the-art, and sales have grown substantively under his leadership.

In celebrating the company’s changed fortunes, he is ever mindful of the importance of branding and what makes for good storytelling in business. “A company’s stories, like all stories, need to be memorable with specific facts and details. They also need to impart a lesson — what is the principle you are trying to communicate to your team and customers, or what do you want them to learn?” he says.

Most important, Pasin adds, they need to be authentic and true. He’s always loved learning about history and is a big fan of origin stories. “I think it is really vital for everyone in the company to know who started the company, why they started it, and how they did it. Since my grandpa started our company and I knew him, I can speak authentically about what kind of person he was,” he says.

Another story he frequently tells concerns an incident at his grandfather’s funeral. “Dozens of people came up to me and said things like, ‘I worked for your grandpa for 45 years, and he always treated me with kindness and respect,’ or ‘I sold manufacturing equipment to your grandpa for decades, and we never signed a contract because all I needed from him was a handshake. His word was his bond; he was the most honest person I knew.’ One by one these older men shared their experiences with me, and at 20 years old, I reflected on what people would say at my funeral. I’ll never forget it.”

He stresses the importance of making origin stories part of a family business brand and explains why — citing a famous non-family business as an example.“Think of Jobs and Wosniak starting Apple in that Palo Alto garage,” he says. “Origin stories give brands their core identity, sort of like their soul. What stories do consumers tell about experiences with a brand? For us at Radio Flyer, the fact that my grandpa was a poor Italian immigrant carpenter is a huge part of our identity.”

And, of course, he learned how important consumer stories are when he started talking directly to people. The experiences customers have described related to the company’s products make for great storytelling, which makes great marketing.

Making failure part of the story

Failure is an important part of a company’s narrative, Pasin says. In fact, he thinks it must be part of it, and that leaders, especially, must share failure stories frequently. “First, when leaders share their own failures openly, candidly and with humor, it makes the leader much more relatable and accessible — it tells the team that failure is OK, and it empowers people to talk about their own failures. It destigmatizes failure. Second, he says, we all know that failure is a natural part of every human endeavor and that it is one of the ways we learn.”

When Pasin first pressed for change, he made every possible mistake you could make, he says. For example, he freely admits he knew nothing about how to hire and that it took him three tries before he found the right product manager. “I feel so lucky and grateful that I was in a family business. I never would've been in the top position if had been somewhere else, and it allowed me the space to make those mistakes and learn.”

Pasin embraces trial and error. “One of the ways I talk about failure at Radio Flyer is by admitting that even after 30 years of developing hundreds of products, I still do not know what is going to succeed until we get a real product at a real price in front of a real customer,” he says.

At one point, he came up with the idea of selling pink or purple wagons with pink or purple dolls in them. The backstory of these “Angel Love Wagon Babies” was that angels made the babies and sent them to earth in wagons. The product went nowhere.

“We use the analogy of planting a lot of seeds to see what will grow. We know some of those seeds are not going to make it, and that is OK,” he says.

When asked about the company’s future, Pasin says the challenges are nowhere near what they were when the company was trying to survive because of the team he has and the strong product line.

“The ongoing challenge is that there’s always an inherent tension in our brand between nostalgia and the latest, coolest thing. When I first started, I had a negative view of nostalgia, partly because I was really paranoid about becoming a relic,” he says. “But I’ve come to learn that the nostalgic part of our brand is really powerful, and we just need to do a really good job of staying true to our brand’s essence while staying current to what consumers want and need today.”