By James I. Dougherty
Photo 1: 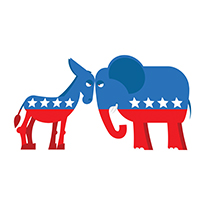 In addition to focusing on safety and cash flow during the COVID-19 pandemic, family business owners must be mindful of the upcoming November election and the likely impact of the results on estate taxes. The death of an owner can result in the death of the company if there is a sudden need for liquidity shortly after the owner’s passing. Proper planning is essential to avoid such an unfortunate result. How would a victory for either political party affect your estate plan?

A potential blue wave
The Democratic Party has made very clear that if it had unfettered control, taxes on property transferred by gift or death would rise. How much the increase would be, and how it would be achieved, are the real questions. Very little of this is revealed in the party’s official platform, but a look at prior proposals enables us to make some educated predictions.

The official party platform’s entire policy on estate taxes is as follows: “Estate taxes should also be raised back to the historical norm.” It is safe to say that estate taxes will go up, given the promise to raise them, but the term “historical norm” has no real meaning to practitioners. Since the inception of the modern estate tax over a century ago, exemption amounts and rates have varied. Just in the past 20 years, the exemption has been as low as $675,000 and as high as the current $11.58 million. Vice President Biden has suggested what the Obama Administration had put forward, which is a $3.5 million estate tax exemption and a $1 million gift tax exemption. While the exact details may be unknown, it is safe to expect legislation that would lower the exemption and potentially raise estate tax rates.

While the prospect of changes to the exemption and rates is a compelling reason to engage in tax-efficient estate planning, more technical statutory and regulatory changes can have an impact on what techniques are available. While technical tax proposals are not typically issued by political campaigns, we can make assumptions by looking at various Democratic proposals.

Some of the most impactful changes affecting estate planning are actually income tax changes, such as synchronizing the transfer tax and income tax rules so that a trust is either owned by the trust grantor for both income and estate tax purposes or not owned for both tax regimes. This would prevent the use of one of the most effective estate planning techniques, the intentionally defective grantor trust (IDGT), which enables a grantor to enter into income-tax-free transactions with his or her own trust. The Obama Administration had also put forward proposals that gifts would trigger the recognition of gain, and Vice President Biden has proposed the idea of eliminating the “step up” in basis that assets receive upon the death of an owner.

For family business owners, among the most troubling proposals from the past that could reemerge are proposed regulations put forward by the Obama Administration (and withdrawn by the Trump Administration) that would affect the valuation of closely held businesses. These controversial regulations, often referred to as “2704 regulations” after the tax code section they were based on, could result in substantial overvaluing of family-owned businesses by disregarding adjustments commonly made by appraisers in determining fair market value, such as discounts for lack of control or marketability.

It is not possible to predict which of these plans would be implemented if the Democratic Party takes control of both the executive and legislative branches. This will turn on how large its congressional majorities would be and which proposals gain traction with the more moderate members. However, for a family business owner, there are no proposals being floated in the Democratic Party that would make transferring a business through the estate tax net any easier.

A sunset on the horizon
Under the Trump Administration, the lifetime exemption has been increased to a record high $10 million inflation-adjusted amount ($11.58 million for 2020). However, this exemption is scheduled to be automatically reduced to a $5 million inflation-adjusted amount in 2026. Notably, the Trump budget proposals since then have not called for a complete repeal of the estate tax, as Republican proposals typically include, but instead advocate a permanent extension of the higher exemption amounts. If Trump is reelected, will legislation be passed that would permanently extend the higher exemption amounts? The answer is simple: Probably not in the short term.

Even if President Trump wins reelection, it appears unlikely that the Republican Party will take back the House of Representatives this election cycle. As such, the Trump Administration would not have complete control over tax policy. Given the Democratic Party’s stance on taxes related to estate planning, it is unlikely bipartisan reforms to the system could be achieved that would make the environment more favorable for business owners. While anything can happen, the most likely scenario under a second Trump Administration is that when the term ends on Jan. 20, 2025, the exemption will still be scheduled to sunset at the end of that year. While the increased exemption remains temporary, it is there for the moment, and the Trump Administration has no proposals that would hinder effective estate planning techniques to maximize the use of the increased exemption.

Setting a course
There will be political uncertainty through Election Day and perhaps beyond in the event of a close election. As Benjamin Franklin said, “but in this world nothing can be said to be certain, except death and taxes,” so estate planning is the wise course for family enterprises. The temptation to wait until the election results are known is understandable but not practical. Establishing tax-efficient planning vehicles can take time, as can determining the fair market value of a family business.

Given the levels of increased estate planning activity already occurring, those who wait for the election results will likely find themselves unable to complete their transactions in 2020. In the event of a Democratic Party takeover of the political branches of government, they would have the power to retroactively pass tax laws to take effect in the beginning of 2021. The prudent course is to assess what planning has been done and what planning may need to be done so that, at the very least, by Election Day, various options are ready to be implemented.

James I. Dougherty is a partner in the private client and tax team at Withers Bergman LLP (withersworldwide.com).