Champions of the river

A fifth-generation family fishery is much more than the catch of the day.

The Delaware River is the longest undammed river east of the Mississippi. From its headwaters in New York, it flows 419 miles into Delaware Bay, bounded by New Jersey and Delaware. About 5% of the U.S. population — 15 million people — rely on it for drinking water.

There are many stewards of the Delaware, but one of them is just as mighty as the river, spanning five generations and active in three centuries. The Lewis Fishery, a once-commercial enterprise based on the annual shad run dating back to the birth of America, is the last haul-seine fishery for this species on the nontidal Delaware River. This traditional method uses a long net with one end attached to the land and the other pulled by a small boat encircling fish to corral them toward shore.

Stephen Meserve, the fourth-generation head of the Lewis Fishery, is a computer programmer by vocation and river advocate by avocation — one of those guys you can imagine more easily in waders than a tie. “I’m Dilbert by day and this guy by night,” he quips. The Lewis family, along with friends, has worked along the same stretch of the Delaware since 1888, when Steve’s great-grandfather Bill Lewis consolidated two fisheries into one in Lambertville, N.J.

The river is one character in this family’s tale, intertwined with the health of the American shad, the largest member of the herr 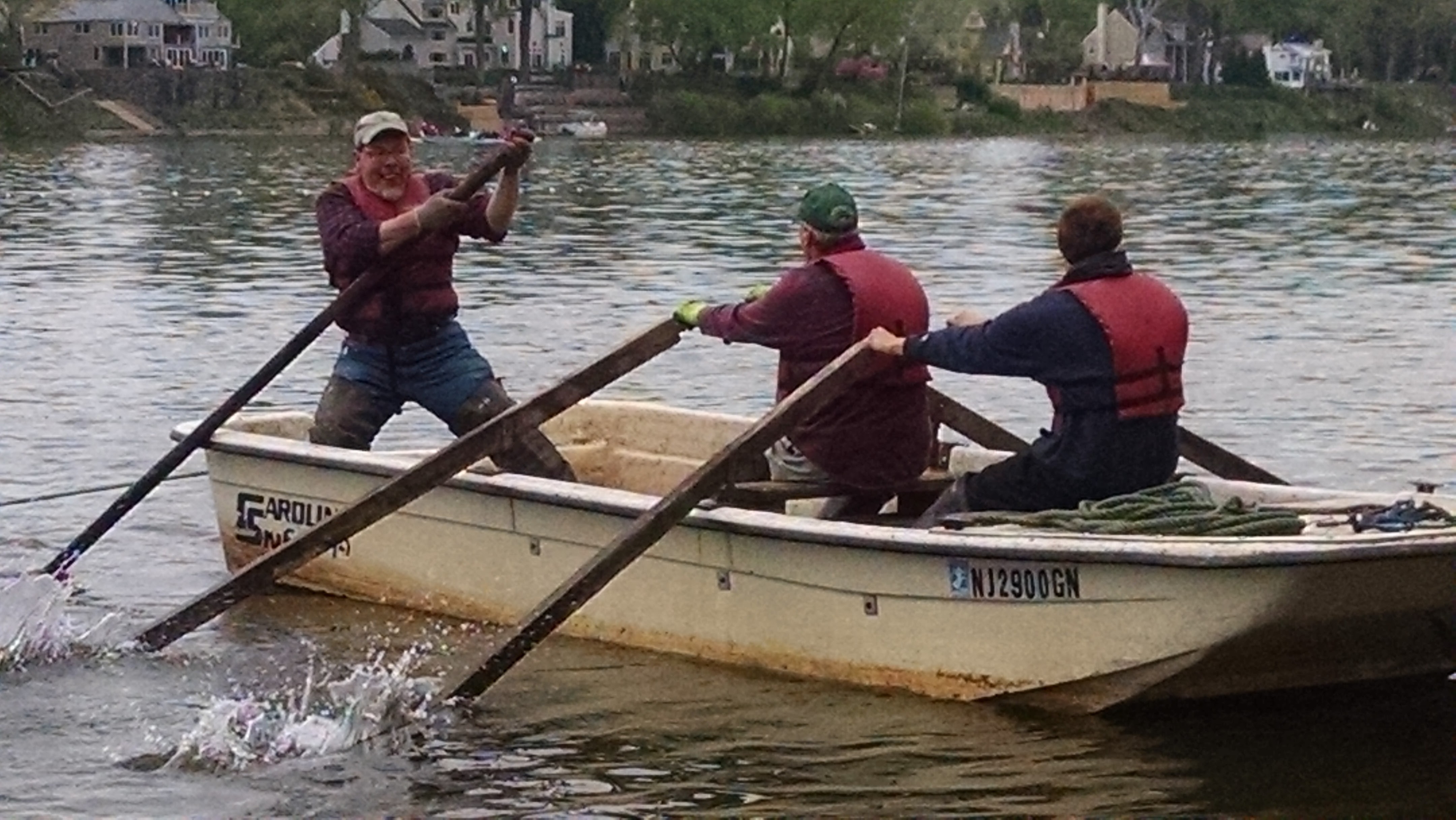 ing family. The family still fishes and lives on the Jersey side of the river, where the drop-off is more gradual than the shore on the Pennsylvania side. It is an evening fishery; shad swim throughout the day to stay near the edge of the sunlight on the water, moving closer to Jersey by dusk.

As the sun dips, the crew launches their rowboat into the current, reeling out the seine-net as one or two people row the boat across the river and back to form a giant net horseshoe. Then four or more pullers grab the ends of the seine and haul it toward shore hand-over-hand, drawing the catch toward them.

The shad “season” runs for eight to 10 weeks, usually starting the Saturday after St. Patrick’s Day. Back in the day, Lewis family members and friends worked the fishery for extra cash in the spring.

“The workers could make as much in these few weeks compared to the entire year employed in the Lambertville paper mill,” says Steve. For Fred Lewis, Steve’s grandfather and Bill Lewis’s son, the longest “day” working on the river was the 60 hours from one midnight Sunday through to noon on Wednesday.

During the 1950s, Fred saw the shad populations nosedive, due in large part to downstream pollution. The times were so bad that the Internal Revenue Service advised the Lewis family to change the tax status of their money-draining business to a hobby. “We really are a commercial fishery in method only. But because of this, Fred foresaw the need to be a voice for the fish and the river,” says Steve.

Fred passed on leadership of the Lewis Fishery to Steve, his grandson. The lineage skipped a generation because Steve’s father, Dave Meserve, died at a young age. His uncle Cliff Lewis also died young and was not involved much in the fishery.

Steve became a crew member when he was 14. His sister, Pamela Meserve Baker, also began at a young age and is still involved with the fishery. Fred taught Steve the fishing methods as well as the importance of taking care of the river.

Since the 1980s, Steve has been gathering data on the shad population for the New Jersey Division of Fish and Wildlife (NJDFW) on the shad population. This vast and consistent record has also become a popular resource for students in a range of subjects, including environmental sciences, folklore and economics.

Fred began to pass leadership of the fishery to Steve in the late 1990s. “During that time, managing the fishery meant that Fred got to tell me what to do and I got to tell the crew what to do,” Steve says wryly about his grandfather’s mentorship. “We became very close, especially after my father died. He was the best man at my wedding.” Fred passed away in 2004 after a long battle with cancer.

Nowadays, women and men perform all the tasks in the fishery. Steve’s wife, Sue Barr Meserve, and his aunt, Sue Lewis Garzynski, both crew the boat. Many volunteers outside the family are also crew members, like folklorist Charlie Groth and her family. Groth published a book in 2019 —Another Haul: Narrative Stewardship and Cultural Sustainability at the Lewis Family Fishery — that examines how community, culture and the environment intersect through the lens of the fishery.

A few fifth-generation Lewis family members are poised to step into Steve’s wading boots one day. His niece, Sarah Baker; nephew, Andrew Baker; and cousins, John and Joe Garzynski, are active in the fishery and might be interested in carrying on the family tradition. Steve says he plans for at least the next 20 years to be on the river every night for two months each spring.

For him, the fishery is a touchstone of what is certain: “It is a way to remember it is all bigger than us, but then again, we’re all part of it. I will keep things in place until it’s ready for the next generation.”

Shad fishing in the time of COVID-19
Steve Meserve’s reports to the New Jersey Division of Fish and Wildlife for the 2020 season reflect the unprecedented changes the world is going through.

His first report in late March: “No fish. With the new limitations in place for New Jersey I don’t know when the next time we can get out to fish will be.”

In early April he wrote: “There have been high waters, low waters, too cold, too hot, too much rain. But never a stay at home order by the Governor.”

As of late June, Lewis Fishery was operating past its historic end date for the shad season. “For as much fishing as we have done, it’s hard to get a real feel for how the run is this year,” Steve says.“We’ll have to wait three to five years and see how the juveniles do coming back.”