The company hosted a party to celebrate the anniversary of its arrival in the Sunshine State as well as the chairman’s retirement from day-to-day duties.

The Business: Claire Phillip “C.P.” Sutter founded a roofing and metal company in Clarksburg, W.Va., in 1902. The company grew along with the north central West Virginia region during the 1910s and ’20s, doing sheet-metal and fabrication work along with roofing. The business survived the challenges of the Great Depression. In the late 1930s, C.P.’s son Wilson, armed with a degree from West Virginia University, joined his father in the company.

The family grew their business by taking on projects such as air ventilation systems at the region’s mines and dust collection and sheet-metal work for industrial plants in addition to roofing. They started a second company, Metal Products Inc., which focused on heavy metal fabrication and steel work. That business and the roofing division saw great growth in the 1950s and ’60s. 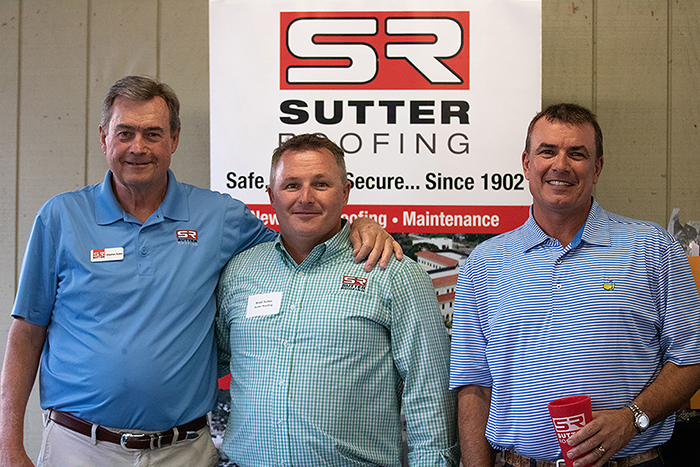 By the early ’70s, Wilson’s oldest son, Stephen, had joined the company. The recession of 1973-75 hit Sutter’s heavy steel business hard. At about the same time, Wilson suffered a stroke that led to his untimely death, leaving Stephen in charge of the business at age 28.

Stephen liquidated Metal Products but retained the company’s top sheet-metal workers and welders. His brother David joined the business to run the restructured sheet-metal shop, which focused on work related to roofing, HVAC systems and ductwork for dust collection. Meanwhile, Stephen ran the operations and the roofing department.

Sutter Roofing and Metal Co. began taking on large and challenging projects and expanded further into West Virginia. In the late ’70s and early ’80s, the business began installing “rubber” roofing, at the time a new innovation.
During a Florida vacation in the ’70s, Stephen noted that rubber roofing had not yet caught on in the Sunshine State and saw a business opportunity. In 1979, he founded Sutter Roofing Company of Florida. He ran both the West Virginia and the Florida businesses until 1984, when he moved to Florida permanently and David assumed the presidency of the West Virginia firm.

In 2017, Stephen’s son Doug purchased the West Virginia business and took over control from his uncle David, who retired.

The Florida business, based in Sarasota, also has offices in Orlando, West Palm Beach, Tampa, Fort Myers and Jacksonville. The Florida company has more than 300 employees. It specializes in large-scale commercial projects such as airports, retail stores and malls, schools and other educational facilities, medical centers, sports facilities, condominiums, government buildings, industrial facilities and hotels.

The Family: Doug, 55, is based in Sarasota and has been president of Sutter Roofing since 2009. He directs the company’s strategic initiatives with an emphasis on operations and customer relationships.

A non-family general manager runs the West Virginia business. “I’m the owner, not the owner-operator,” Doug says.
Doug’s brother, Brad, 50, serves as executive vice president of the Florida business, overseeing business development. Their father, Stephen, continues as chairman of the Florida company and stops into the office weekly.
No fifth-generation members currently work in the family business.

The Celebration: Doug and Brad thought it was important to combine a celebration of the company’s 40 years in Florida with a retirement party for their father.

“Forty years is a great milestone for any business,” Doug says. “The Florida enterprise had far surpassed the size of [the business in] West Virginia. We thought that, one, that was important, but [also], two, that Dad had done so much, and made so many contacts, and built a really good business here — to not do anything to acknowledge his career didn’t feel right.”

“We wanted to have the party and make it in conjunction with Dad’s retirement, because he took the chance. He had a successful business that he was running, and we had a good life in West Virginia. But he felt that there was more out there and he could do better in Florida, and it was a great move for our family. And he’s been a big part of the roofing industry in Florida and the construction industry in Sarasota.”

The party, held on April 12, 2019, took place at the local farm bureau and was catered by Gecko’s Grill & Pub, 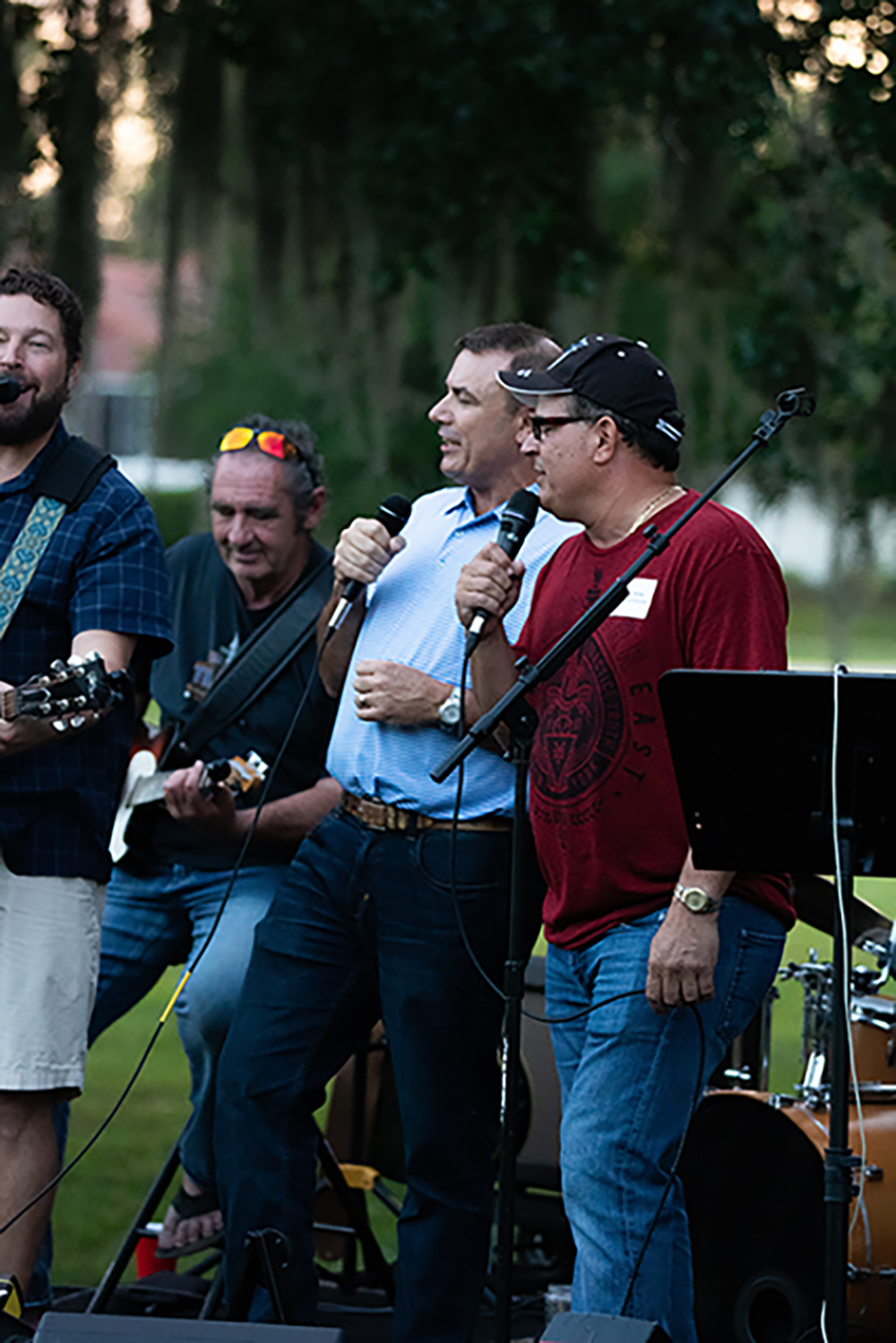 a favorite neighborhood restaurant. Entertainment was provided by a local band, Kettle of Fish.

“My dad is a big fan of live music and Southern rock,” Doug says. “That’s what they specialize in. The lead singer in the band had played solo at our 30th anniversary party, so we felt that for the 40th anniversary plus [Stephen’s] retirement, let’s just get the whole band.”

Stephen, 73 at the time of the party, had been coming to work regularly up until then, though his wife, Melinda, had retired from her job as a high school media specialist. “Most of his contemporaries that he did business with had retired, and his friends are all retired, my mom retired seven or eight years ago, and it was time for him to retire as well,” Doug says.

A photo montage at the event featured pictures of Stephen as a young man, with his family and working at the company through the years. Photos of current and former employees, and of Sutter’s notable roofing projects, were also shown.

The Planning: The first discussions about the celebration started about a year in advance, though planning didn’t begin in earnest until six months before the party.

“Six months beforehand, we secured the venue and I secured the band, and had a concept of what we wanted to do,” Doug says.

Current and former employees and customers were invited to the party — “anybody we felt was a great part of our growth and success over the years,” as Doug puts it.

“We’ve got a good culture, and a bunch of hardworking people that work very well together, and we do like to celebrate outside work hours. We truly have a great team.”

The Response: Marketing director Whitney Beasley, who played a key role in the planning, estimates that more than 250 customers, employees, friends and family members attended the celebration, including friends of Stephen and Melinda’s who flew in from out of town.

“It was just a great party,” Doug says. “It was a great time of the year to have it.”

Stephen, of course, was the center of attention. “Everybody brought him retirement gifts, and [offered] kudos on celebrating the anniversary, and what a great company we built,” Doug says. “It was rewarding for all of us.”

Although the company logo was displayed prominently at the event, including on the cake, “It wasn’t a Sutter Roofing promotion at all,” Doug says. “It was just a celebration for all of us and all our employees, and for Dad.”

The Advice: Doug offers this recommendation to family companies planning a milestone celebration: “I think you have to recognize everybody that you can who has been a part of that success over the years. Be sure that your best customers are invited, and your key employees. Make sure that everybody feels good about the company and reaching that milestone, and knows what it takes to get there.”

Brad notes that in planning the celebration, the Sutter Roofing team brainstormed about the important people and events in the company’s history “and how to tie those events and the people into the celebration.”

It’s important for key people in attendance to be mentioned during the festivities, Brad says, “as an example of the enduring relationships that can propel you from a small company and can sustain you for 40 — or 100 — years.”