The Business: Ralph’s Italian Restaurant, located in South Philadelphia, is the oldest continuously operating Italian restaurant in the United States. The previous holder of the title, Fior D’Italia in San Francisco, closed in 2012 and reopened in December of that year under its fourth owners. It closed again temporarily during the COVID-19 pandemic.

Jimmy Rubino Jr., a fourth-generation co-owner of Ralph’s, notes that even before Fior D’Italia’s 2012 closing, “we had the distinction of being the oldest same-family Italian restaurant in the country. We were already used to being that and having that feeling.”

Francesco Dispigno and his wife, Catherine, immigrated to the United States from Ischia, an island off the coast of Naples. In 1900. they opened a restaurant on Montrose Street in South Philly and named it after their son, Ralph (Raphael). In 1915, they moved the business to a larger location on South Ninth Street, where the restaurant remains today.

“Both Francesco and Ralph were very charitable and involved with the community,” says fifth-generation family member Alexis Rubino-Ofchinick. “They would sponsor immigrants to come over [to America].” They gave the newcomers a job and a place to stay on the building’s third floor. In 2000, Ralph’s centennial year, the third floor opened as a dining room and party space.

Ralph Dispigno took over after his father passed away in the 1930s. During the Depression, Ralph and his wife, Mary, sold spaghetti and meatballs from their front door for 5 cents a plate. During Prohibition, they surreptitiously served wine in coffee cups.

When Ralph Dispigno died in 1972, ownership passed to his four children. Today the restaurant is operate

The menu has changed over the years to keep up the times and with diners’ changing tastes. Tripe and sweetbreads fell out of demand, “but we’ve started featuring them back again. They have a cult following, it seems,” Alexis says. “We try to stay current but also keep true to our roots.”

The restaurant’s reputation extends beyond Philadelphia. “We have people come from all over all over the country, even all over the world. And it’s really humbling,” Alexis says.

When Ralph’s comes up in conversation, she says, people often tell her about their marriage proposals at the restaurant or reminisce about celebratory meals there.

Ralph’s has been featured many times on the Food Network, on ABC’s The Chew in 2012 and on PBS’s No Passport Required this year. “It’s funny how many people actually know Ralph’s outside of Philadelphia,” Alexis says.

Jimmy recalls a celebrity encounter when he was a 6-year-old busboy in a red velvet vest. “I remember meeting this guy who became friendly with my grandfather. He’d pat me on the head.” That customer was Frank Sinatra, who 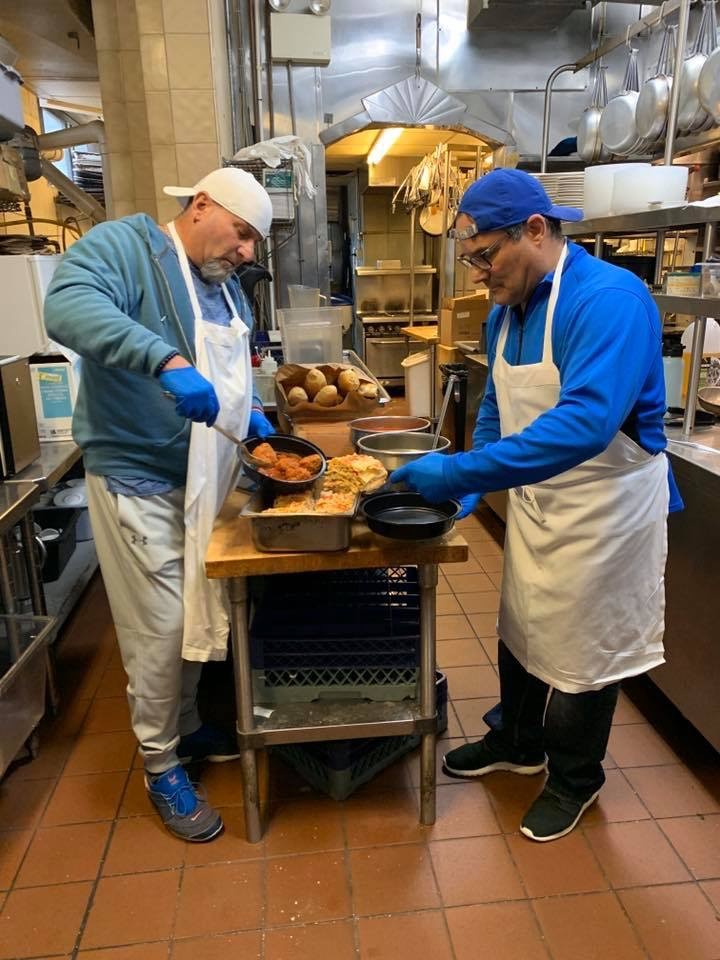 performed with the Rat Pack at Palumbo’s, a restaurant and nightclub around the corner from Ralph’s. “They would come and eat,” Jimmy says. “Like, this was normal. I was never in awe. I don’t get starstruck.”

Ralph’s has survived two world wars, the flu epidemic that devastated Philadelphia in 1918, Prohibition, the Great Depression and the Great Recession. And it continued to serve customers during COVID-19 via takeout, delivery and outdoor dining. It was closed for only one day in March before shifting to takeout and delivery. It began serving customers outdoors in June, when the city permitted restaurants to do so, and resumed limited-capacity indoor dining on Sept. 8, when city restrictions were further eased.

“We are so blessed,” Alexis says. “I mean, of course there’s the dedication and the hard work and the sacrifices that have been made. But I’d be lying if I said we didn’t feel as though there were some sort of divine intervention as well.”

Because the restaurant still operates in the building that Francesco and Ralph purchased all those years ago, the family didn’t have to worry about making rent during the pandemic. Their resilience also has helped them survive a situation that has felled dining spots nationwide.

“Growing up, my mom made it very clear that sacrifices had to be made to keep this restaurant going,” Jimmy says. “So we understood at an early age what we had to do, and we did it. We put blinders on, kept our head down and just worked 60-, 70-hour weeks. And so that was one aspect — my mom laying the groundwork as far as what we had to expect.”

Continuity requires a mix of consistency and innovation, Jimmy says. “A restaurant that’s as old as this, you get comfortable. And we started to see that.”

When business started to return after the Great Recession of 2008-10, the family realized they needed to make changes. Jimmy’s son Ryan, who had returned to the restaurant in 2011 after graduating from Hofstra University and working in marketing in New York, pushed Ralph’s to develop a social media presence. Ryan also advocated for the use of third-party delivery services.

Jimmy admits to being skeptical about deliveries at first. “I was being old-fashioned, growing up with old-fashioned views from my family carrying them down,” he says. “Needless to say, thank God we did, because 10 years later, that’s keeping us afloat.”

Ralph’s has a foyer that takes up most of the sidewalk space in front of the restaurant, limiting outdoor dining opportunities. The family secured permission to set up tables in front of its neighbor Sarcone’s Bakery, a fifth- 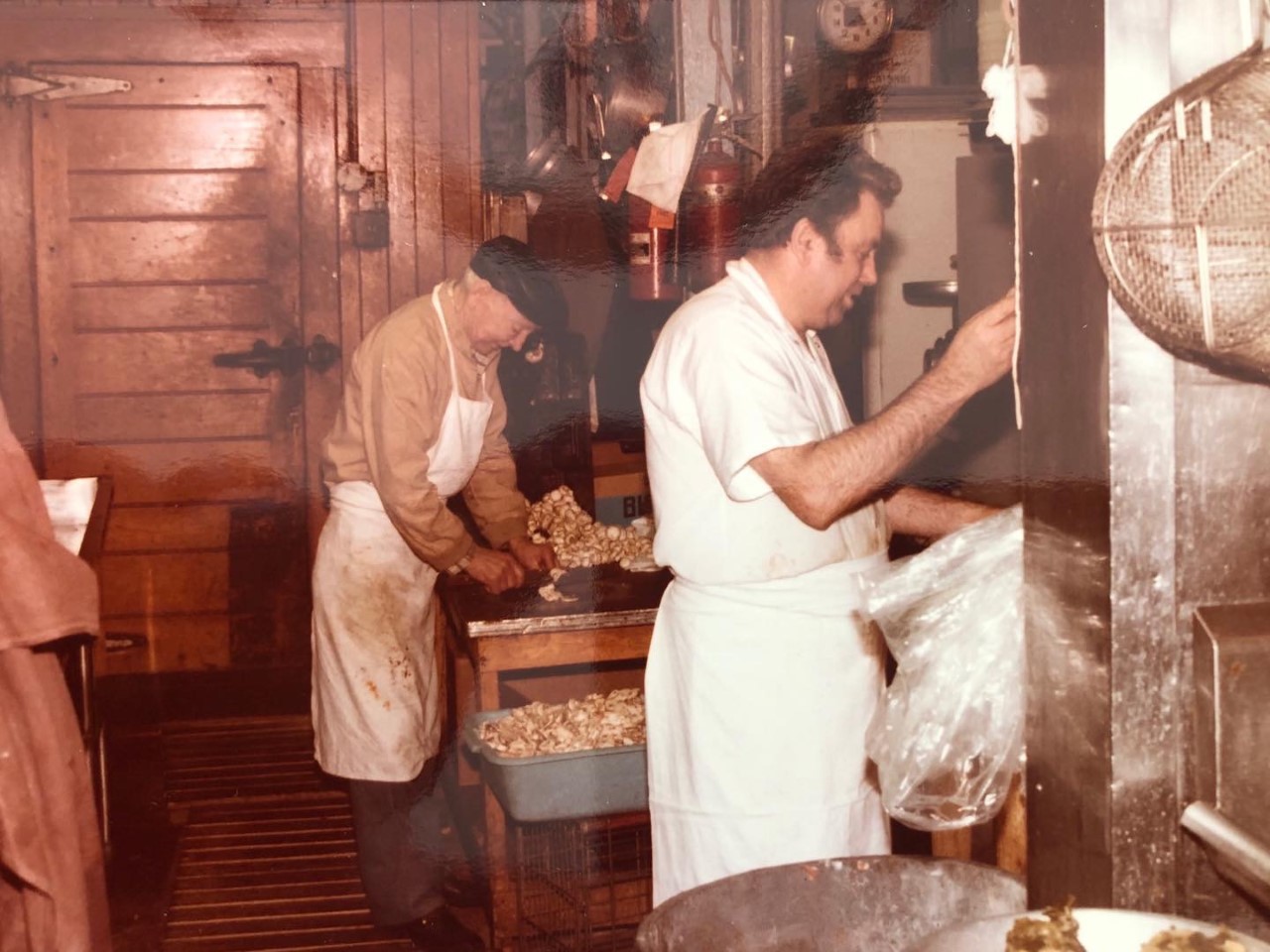 generation business that’s the restaurant’s bread supplier. Large parties were seated in the yard of Jimmy and Eddie’s mother, Elaine Dodaro, who lives in the house next door.

The family has had other ventures over the years: Ralph’s branches in suburban Ambler, Pa., and King of Prussia, Pa., a market/BYOB and a grab-and-go food store. Bar One, a bar across the street from Ralph’s that was co-owned by Ryan and his sister, Gabrielle, along with cousin Anthony Barone, opened in 2016 but did not survive the pandemic.
In 2017, the family launched Gravy Joint, its first foray into “virtual dining” — delivery-only restaurants. Gravy Joint offered homemade pasta with a rotating menu of sauces and gravy (as red sauce is known in South Philly). Because its food was prepared in Bar One’s kitchen, Gravy Joint was temporarily suspended when the bar was put up for sale. The family hopes to relaunch it and has other virtual dining concepts on the drawing board.

The Family: Today, Ralph’s is co-owned by Jimmy and Eddie Rubino and their mother, Elaine Dodaro. Other family owners were bought out in 2017 after a dispute over the King of Prussia site and a plan to franchise Ralph’s nationwide. The franchising plan is currently on hold.

would shuck the clams and just be a presence,” Alexis says.

After Ralph’s location in King of Prussia closed in 2019, Jimmy’s children, who had been running the suburban outpost, found jobs elsewhere. Ryan is currently working in sales for Samuels and Son Seafood, a restaurant supplier. His sister Gabrielle is a sales rep at Stryker Surgical Technologies.

Eddie’s daughter Alexis, who managed Ralph’s in Ambler, left the business to raise her family. She recently opened her own bakery and also helps out with Ralph’s marketing and social media. Her two sisters, Sydney and Olivia, have careers in special education.

“We have the next generation of family kind of just sitting there waiting for when the time is right for them to come back,” Jimmy says. “So that gives me and my brother and my mom a lot of peace of mind, knowing that it doesn’t end with us.”

Jimmy and Eddie grew up in the house next door to Ralph’s, and Alexis lived in that home with her grandmother, as well. She recalls doing her homework at a desk her grandfather had built in the bar area. “It’s home for me,” she says of the restaurant. “And I know that my father, my uncle and my grandmother would say the same thing.”

The Celebration: Ralph’s had to strike a delicate balance when planning an anniversary celebration during a pandemic that devastated the restaurant industry and jeopardized the health of people nationwide. “I didn’t want anyone to get the wrong impression,” Jimmy says. “We were very careful how we did it, because I didn’t want to come off like, ‘The end of the world is happening, and here they are, celebrating their 120th anniversary.’ So we tried to do it tastefully.”

Jimmy and Alexis created a virtual celebration on the restaurant’s Facebook page during the month of May. Ralph’s officially turned 120 on May 17.

“Engagement with the loyal customers was how we wanted to celebrate,” Alexis says. “We really wanted to 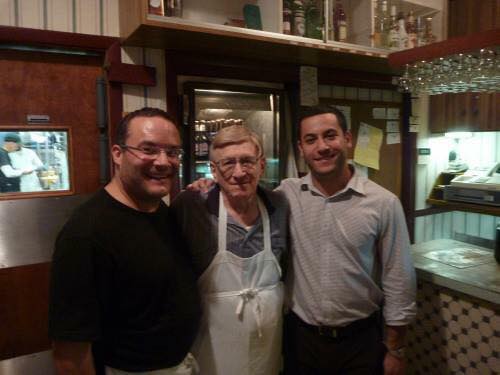 honor those people that have been so loyal to us through the years. Social media has been an incredible tool for connecting.”

All month, Ralph’s Facebook page featured old photos of the restaurant, famous guests, Dispigno/Rubino family members over the years, menus and other artifacts from the past, and photos of signature dishes.

One post featured Joel and Marlene, a couple who marked their 60th anniversary this year. They sent the restaurant photos of themselves and their family “celebrating all of their milestones in our various dining rooms,” Alexis says.
Customers were invited to participate in a couple of contests. One was a Ralph’s trivia game. Faithful followers of the restaurant’s Facebook page could find the answers embedded in posts earlier in the month. Restaurant gift cards were given as prizes.

Another contest involved recipes submitted by customers. The winner earned a gift card, and Ralph’s plans to include the winning recipe on its menu.

The restaurant’s centennial celebration in 2000 included the publication of a book, Ralph’s Italian Restaurant: 100 Years, 100 Recipes. Jimmy and Alexis are planning an update that will incorporate 20 additional years of history and 20 more recipes. The project was delayed as Ralph’s focused on adapting to COVID-19, but uncle and niece say they hope to complete it by the end of the year. (He plans to make some changes to the existing recipes and add the new ones; she will write the historical section.)

The intent of the anniversary celebration, Jimmy says, was “showing our gratitude for the people who stood by us. Because let’s face facts, if it weren’t for the customers, we’ve got nothing.

“We never take it for granted. We would not be Ralph’s without them.”