Employees in all 12 locations enjoyed festivities on the company's birthday, Feb. 14. The family is visiting the branches for additional celebratory luncheons throughout the year.

The Business: As a high school student in Reno, Nev., Don Jensen worked part-time pouring and selling concrete parking curbs. In 1967, he went to work for a friend of his father’s who owned a business called Washoe Septic Tank Service, an excavating contractor that manufactured, installed and pumped septic tanks. The owner offered to sell Don the precast and pumping portion of the business. On Feb. 14, 1968, the sale was completed.

What started out as a one-man business today has 800 employees and 12 manufacturing facilities in Nevada, California, Arizona and Hawaii. The company manufactures 22 product lines for use in highway construction,
retaining walls, electric and gas utilities, telecommunications, water, on-site wastewater and sewage
applications. 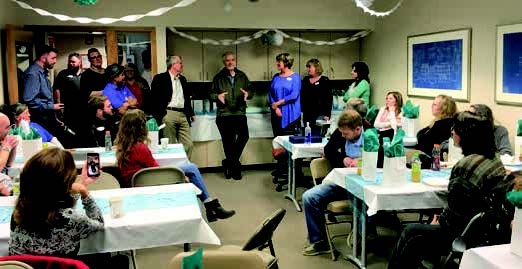 As Don was running his new business, he was also serving in the U.S. Army Reserves. Although he wasn’t sent to Vietnam, he was an active member of the Reserves until 1972, the year he bought the company’s first manufacturing site in Sparks, Nev.

In 1978, the company entered Las Vegas in its first expansion. According to Don’s daughter Jill, that initial growth spurt represented a major challenge for the founder. “It was really huge for him and his company to venture out like that to another area,” Jill says. “It was quadruple the work, in his opinion; it wasn’t just double.”

A further expansion occurred in 1981, when Jensen Precast opened a branch in the Northern California city of Roseville. (The Roseville facility moved to Sacramento in 1995.)

After moving into Northern California, Don began combining geographic expansion with product diversification. In addition to septic tanks, he started making precast concrete products for underground utilities. “That opened a huge door for the company,” Jill says. “He just continued that growth.”

Another significant point in the company’s history was its acquisition of Brooks Products, a precast concrete company in Fontana, Calif., in 1997. “He put all his chips on the table for that growth,” Jill says. Today, it’s known as Jensen’s Fontana branch and is the company’s most profitable location.

Jensen Precast has continued to grow by acquisition in addition to organic growth.

Today, the company has seven California locations. It has been operating in Arizona since 2002 and now has branches in Phoenix and Tucson. Jensen also entered Hawaii in 2002 and over the years has leased property in Honolulu and Kapolei.

In 2017, the company purchased the property it had been leasing in Kapolei; it’s currently expanding and improving the manufacturing facility there.

In 2015, the company combined its pump stations, stormwater systems and on-site wastewater systems into
one initiative, Water Resources, in Sparks.

Don “pushes very hard for growth and expansion,” Jill says. “He just has that in his personality. What we’re doing now in our family council is trying to transfer his knowledge. We’re trying to find out why he made those decisions.”

The Family: Don, 72, is the sole owner of the business. His son Eric, 51, is president. Don’s other son, Kurt, 49, is general manager of the Sparks branch. Eric and Kurt joined the company in 1985 and 1987, respectively. Jill’s husband, Fred Mayorga, a maintenance technician at Jensen MetalTech, is the only married-in working in the business.

Don’s daughters Jill, 47, and Megan, 36, are co-chairs of the family council. Jill has worked at Jensen Precast since 1989 and has been involved in sales, accounting, marketing and property management. Megan has worked in the company since 2006 in a variety of roles, including customer service, inventory control, estimating, sales management and oversight of Las Vegas production facilities.

The family has engaged a consulting firm and has been holding regular family meetings. They are in the process
of developing a set of agreements and policies that will help the second generation function smoothly as business
partners in the future.

There are three members of the third generation, whose ages range from 10 to 17.

“We talk about family issues in our family council so they don’t bleed over into the business,” Jill says. 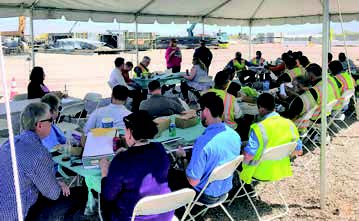 The Celebration: “The family decided that we wanted to celebrate with all of our employees, and also celebrate throughout the year,” Jill says.

On Feb. 14, 2018, parties were held at all locations. These celebrations featured food, cake and giveaways. Employees received a tumbler and a hat with the Jensen Precast logo. They also got a $100 gift certificate to Lands’ End Business (the retailer’s corporate apparel unit), which they could use to acquire a clothing item of their choice featuring the 50th anniversary logo and the logo of one of the branches.

Each branch put its own spin on the party by choosing the food on offer (for example, pizza and wings at the corporate office, hot dogs and hamburgers at MetalTech).

Other events are scheduled throughout the year. The family and leadership team are spending 2018 traveling to company branches for additional celebrations: Southern California in January, Arizona in April, Northern California in May, Reno/Sparks in July and the Las Vegas area in December. These visits include a luncheon and a special anniversary program.

The program opens with a presentation by Jill on the company history, followed by remarks from Eric focusing on recent achievements and the company’s plans for the future. Then the management of the branch location discusses the history of the branch and forthcoming major branch projects.

The luncheon agenda includes a talk by a representative of the local Boys and Girls Club. Jensen Precast and its employees support the organization through a matching-donation program.

Each branch celebration concludes with a service award ceremony honoring employees who have been with the company for five years or more.

The Planning: The family council took the lead in planning the celebration. Jill began working about a year in advance; Megan later joined her. They have called on employees from several departments for assistance. The first step involved creation of a 50th-anniversary logo. An outside graphic design company was hired to develop the logo. Jill and the Jensen marketing team then considered where the logo would be placed and how the milestone would be publicized and commemorated. 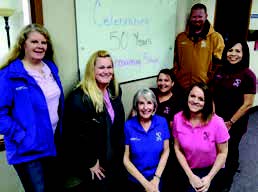 The planning team also ensured that each location received the supplies it needed for its events and that employees were well informed about the dates.

Among the items being distributed to employees is a thank-you letter from the family. A Spanish-language version of the letter has been produced for employees who are native Spanish speakers. Although the marketing department was the most heavily involved in the planning, Jill worked with each branch office manager and general manager to plan events at the branches, Jill says. The HR department assisted with the service awards presented to employees.

The Response: The company encouraged team members to share memories of working at Jensen Precast on an intranet site set up to mark the 50th anniversary. “We are able to respond and say, ‘Thank you, and we appreciate you,’” Jill says. The company also invited employees to submit photos of themselves sporting their logo apparel. Those who do will be entered into a drawing to win a $100 gift certificate.

Congratulatory emails from employees have been circulated among family members. “The family is getting feedback from the employees,” Jill says. She says employees have been enjoying the celebrations. “They like having the family come to the branches to say thank you, meet them and talk about the history.”

The Jensens are having a good time, too. “We did determine early on that not every family member could make it to every single event throughout the company, but that we would make every effort possible,” Jill says. The third-generation members join their parents for branch visits as often as they can. Family members started traveling to branch locations as a group several years ago at the urging of their family business consultants.

“That’s where we really became united as a family, because we were able to see that we had a shared goal, a shared vision,” Jill says. “Family is very important, but the very next thing on our list is our employees: how much we appreciate them and want to take care of them and be able to meet them,” Jill adds.

Planning the celebrations, she says, has been “a lot of work, but very rewarding. This is the highlight of what I do.”
The Advice: “My advice would be to start early,” Jill says. “At least a year in advance would be my recommendation.
And try to include as many stakeholders as possible in the celebration.”

Jill says her family is proud to have sustained their business for half a century. “We’re enjoying celebrating,” she says. “We know that a lot of companies don’t make it to 50 years, and a lot don’t transition well to the next generation. That’s something that is a priority for us, and that we want to stay focused on.”