The Hannibal, Mo., store plans to award a 1.75-carat diamond and other prizes in an essay contest. The topic of the essays: memories of meaningful gifts purchased from the venerable business.

The Business: The history of Crescent Jewelry Company begins in 1842, when R.E. Lackner opened a jewelry, camera and general mercantile store in Hannibal, Mo. Lackner had three children: two sons, Lyman and Linus, and a daughter, Lucy, who married Lewis Heiser, also a jeweler.

When Lackner decided to move his business to Paragould, Ark., Lucy and Lewis stayed behind and started their own store, the Heiser Jewelry Company.

Bobby Heiser, 69, the fifth-generation owner, was always puzzled by his ancestor's move to Arkansas. "I don't know why they chose Paragould, of all places," he says. "They built a nice, beautiful store there, but things slowed down." In 1907, the Lackner side of the family moved to Brownsville, Texas, where they opened what Bobby Heiser calls "one of the finest stores in Brownsville." The 1907 move to Brownsville was easier to understand: A jeweler skilled in watch repair would get a lot of business in a railroad town like Brownsville, since precisely tuned timepieces were critical to running the railroad. The Brownsville store, Bobby says, "was always much larger than what we were here."

Meanwhile, in Missouri, multiple Heiser children and in-laws had joined Heiser Jewelry Company. By 1923, the store had become very crowded. The family started another store, called Crescent Jewelry, which is what survives today. (The original Heiser Jewelry Company was sold in the late 1970s.) Lucy and Lewis's son Alvin (Bobby's grandfather) married Veda Erickson, who ran the store with her brother, Edwin "Pete" Erickson.

Alvin worked in the business for about four or five years, then spent some time in Mexico building a railroad. He later returned to the store and worked there until his death in 1944.

Bobby's father, Robert L. Heiser, became an optometrist and partner in the store with his mother, Veda, and uncle, Pete. Young Bobby joined the business at the tender age of 7, walking to the store after school instead of going home. There, he would polish rings that his father and great-uncle had repaired or resized, standing on a little stepstool built to help him reach the polishing wheel.

"In third grade I was a good speller, so I'd take the engraving machine home and do that at home Sundays, [while] watching TV," Bobby says. "If I got it wrong we couldn't sell it, so we had some silver at home with doilies on it to cover up the wrong names."

Bobby especially credits his great-uncle Pete with teaching him the business, more so than his father or his mother, who worked at the store only occasionally. "I sold my first 1-carat diamond at age 13," Bobby says. "It was a big deal. We didn't sell a lot of large stones before then. Hannibal isn't a wealthy, rich town." 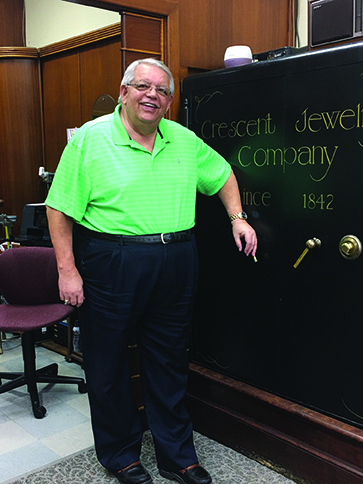 At that time, it was common for jewelers to be optometrists also. Bobby's father clearly enjoyed that part of the business. "He was a bit shy and didn't want to take the blame for bad decisions, so he had me making decisions," Bobby says. "He didn't like selling because he was afraid he'd say the wrong thing and lose the sale."

Crescent Jewelry today has seven employees: four full-time and three part-time. None are family, but all have been there a long time, says Bobby. One employee who began working at the store in high school is still there, celebrating her 41st year at the company.

Between 1969 and 1970, when Bobby returned from college, the store experienced a key growth period. "We bought the building next door and expanded," Bobby says. "That was when we carried sterling flatware and china. We added more engagement rings and bigger diamonds. My dad didn't like big diamonds, but you can't sell from an empty case." Like most jewelers, Crescent now sells some giftware but no tableware; customers today want stainless and stoneware instead of the sterling, crystal and china that earlier generations coveted.

The Family: Bobby and his wife, Donna, are the sole owners of Crescent Jewelry. Bobby's older sister, Judy Heiser Pratt, never wanted to be part of the store. Judy left Hannibal when she got married.

"I love her, and we get along really well and we probably could have worked together, but she didn't enjoy working in the store, and I did from the time I was 7. I have a passion for it," Bobby says. "I was the Number 1 salesman from the time I was 14 or 15."

When Alvin died, Veda inherited half the store. The other half was split between their two children, Bobby's father and his aunt, Toby Evelyn.

Bobby's father took a different approach to estate planning. "It took a long time to buy his sister out, so my dad set it up that my sister got the CDs [certificates of deposit], the [life] insurance, et cetera, and I got the store. He knew that was what I wanted," Bobby says. "When my sister never showed an interest in the store, he'd buy her cars and stuff, and it sort of evened out. So often you get two siblings in the store, and if all they do is fight, it is terrible for the business."

Bobby and Donna have no children. "I've had three nieces and a nephew work with me, but it wasn't for them, and they went on to other jobs," Bobby says. "I worked 60 to 70 hours a week, but I have a passion for it. It's something I always loved my whole life." Donna comes into the store sometimes, he says, but she doesn't officially work there.

Bobby's cousin, Robert H. Lackner—also called Bobby—owns R.H. Lackner's Fine Jewelry & Gifts, a descendant of the Brownsville store. That store and Crescent are separate entities. Bobby Heiser's and Bobby Lackner's fathers had a friendly relationship, but distance took its toll on the two G5 cousins, who lost touch over the years.

The Celebration: Plans are under way for Crescent Jewelry's 175th anniversary celebration. The store will hold a two-week sale in fall 2017. Bobby Heiser's plans for the celebration all revolve around the store's roots in the community and the many generations that have shopped there. He intends to give away a 1.75-carat diamond, as well as some other jewelry, as part of the celebration.

"We haven't finalized everything, but we're going to have a writing contest," Bobby says. "There are so many families where we've sold [to] two, three and four generations of the family, so we're going to have them submit an essay about what Crescent gift meant the most. We'll have four or five categories: bridal, graduation, gifting and other things meant for memories in our business," he says.

He might also have a few other events during the two-week sale period, but so far the essay contest is the only certainty.

A big party won't be on the schedule. "My family was really involved in alcohol, and I drank very heavily when I was younger, but I quit 35 years ago, so I don't do a lot with alcohol," Bobby says. "It doesn't bother me that others drink, but I don't. I don't think the store would be here if I'd continued. I was just one of those people that couldn't handle it," he says bluntly.

Bobby reports that he received many congratulatory letters from community members after an article about Crescent Jewelry's 175th anniversary was published in Quincy's local newspaper, the Herald-Whig, in January.

"We've always been involved with all the good projects—the YMCA, the United Way. I've been on almost every committee you can think of," says Bobby. "My nephews come in summer and they're amazed that I know everyone. Everyone drives by and waves. We go out to a restaurant and I know everyone. I've got a lot of fourth- and fifth-generation families I've dealt with." 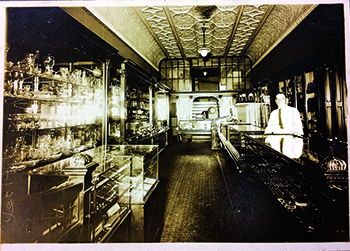 The Advice: Bobby credits his and Donna's modest lifestyle as a key to the store's longevity. "One of the reasons we've stayed in business so long is we're really conservative," he says. "If we don't have the money, we don't buy it. We're not real big spenders. We don't go on big vacations."

This approach is a stark contrast from that of other jewelers who strive to maintain a lifestyle that mirrors their affluent customers'—even if it's beyond their means. "A lot of people got very high and mighty and thought they could get someone else to run the store [during the owners' frequent vacations] and it wasn't run right," Bobby says.

Bobby's driven 150 miles to deliver a wedding ring on time, and even slipped a customer's ring under the family's Christmas tree when they were out. "I went down to the post office on Christmas Eve—back when someone was there all night—and asked if they had a registered package for Crescent," he recalls. "It was the mounting, so I went back and set three stones in it, then drove it over to the customer. Back then, everyone left their doors unlocked, so I went in and put the ring under the tree."

Bobby's key piece of advice for business owners planning a milestone celebration—offered with a laugh—is to start earlier than he did.

The Future: With no younger-generation Heisers waiting in the wings, Bobby says he might end up having to close the store, though that's still far off and he hopes to be able to sell it first. "A couple of people are interested," Bobby says. "There's one gentleman that wants to take it over but doesn't have the funds. He might have them by then, though, and he's a nice fellow."

Bobby will turn 70 in September and envisions working at least until he's 75. "My health's pretty good, but not what it used to be," he says. Still, he doesn't see the point in sitting around at home, since Donna is younger and still working.

Beyond his desire to preserve his family legacy, he's also worried, as always, about his customers. There used to be more than a dozen jewelry stores in Hannibal, but they're gone now, and one frequent theme in all the congratulatory letters he's gotten is, "What would we do if you're gone?"

"If we close," Bobby says, "there's nobody in town to change a watch battery except Walmart."

Hedda T. Schupak is a business writer and jewelry industry editor and analyst.