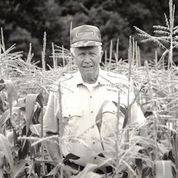 The Patton family name has been synonymous with the military for generations. General George S. Patton is widely considered one of the most successful combat generals in U.S. history and his son, George Patton IV, was a major general in the Korean and Vietnam Wars.

Today, Bob Patton, the 64-year-old non-military grandson of George S. Patton, is the CEO of Green Meadows Farm. The 200-acre farm just north of Boston was intended as the retirement spot for Gen. George S. Patton, but he died in 1945 and never took up residence on the farm.

“But my father did retire there, and he lived in relative quiet as a retiree,” explains Bob Patton. “After about a year of retirement, he became restless and decided he wanted to be a farmer, so that’s what he did. He grew vegetables, which he sold on a roadside farm stand.”

Bob describes his father as a deeply conservative man who embraced the organic green philosophy of farming. “He kind of evolved from this stern, fire-breathing military man into a Carhartt-wearing man of the soil.”

Bob’s father died in 2007, but the farm carried on. In 2017, Bob got a call from his mother, Joanne Patton. The farm was becoming too much for her. “She said, ‘I can’t do this myself. What shall we do with the farm?’ So, we had to decide what to do. Sell it? Continue it?”

The siblings gathered to figure out the next move, and that’s when the idea of cannabis farming surfaced. “One of the pillars of this family has always been altruistic. We want to help veterans no matter what. So we investigated cannabis and realized there was something there with medical cannabis. We could help veterans with PTSD.”

When presented with this particular idea to save the farm, Bob’s 89-year-old mom, Joanne, gave a firm, hearty response. “Over my dead body.”

Over time, though, she came around. “Look, our cannabis plan came out of left field. But my mother is a forward-looking woman. She’s always a few steps ahead of everyone else.” Shortly after the conversation, Bob says, his mom started sending him clippings about medical cannabis and got behind the idea completely.

“We dipped our toe in the cannabis water as a family. It’s a business — it’s more than a business, really. This farm is a destination for the Patton legacy, and people want to be a part of it,” Bob says. “And this continues to this day.”

Lest anyone confuse the Green Meadows Farm operation with a Cheech-and-Chong-festooned bong, stand down, please. The farm employs 40 people in its cannabis operation, including a half-dozen vets. Patton siblings, grandchildren — the whole family — participates in this agricultural venture. The farm harvests medical cannabis but has recently introduced recreational marijuana into its agricultural portfolio. “This is a business decision. We can do more good for our causes by including recreational marijuana. It gives us the ability to be more charitable,” Bob explains.

When asked if his family’s name and legacy have gone up in smoke, Bob is crystal clear. “There are plenty of people who think I have shamed the family legacy. We prioritize the care of soldiers,” he says. “On the business side, with adult use marijuana, we have to be daring and think outside the box and give ourselves a good challenge. That is the legacy of the Patton name. We are daring.”