Buying the Utah Jazz was a slam dunk

When Gail and Larry Miller bought into the NBA’s Utah Jazz, they had been to just a few games, and that was only by invitation from people who hoped the couple would invest in the team.

The Jazz moved from New Orleans to Utah in 1979, the same year the Millers bought their first car dealership, launching the business that is now a family of 80 companies. 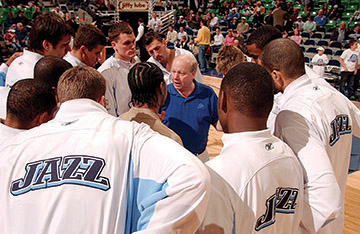 “We had been so busy building our company we hadn’t been to a game,” says Gail Miller.

In 1985, the team was in danger of being bought and moved to another city. There was a movement to have 30 people active in the community invest $100,000 each to keep the Jazz in Salt Lake City.

“[Larry] said, ‘I’m interested in having them stay here, but I don’t think that’s how to do it,” Gail says. So the Millers bought half the team for $8 million. The following year they bought the other half for $14 million.

“I remember thinking that was huge at the time,” Gail says. The risk paid off. The team is now worth more than $1 billion.

The team became more successful after the Millers’ acquisition, and the family found the original arena was too small to sustain the franchise. The Delta Center (now the Vivint Smart Home Arena) opened in the fall of 1991. In addition to being the home of the Jazz, the arena hosts mega-concerts and was the site of the figure skating and short-track speed skating competitions in the 2002 Winter Olympics.

Currently, Gail’s eldest son, Greg, is governor of the Utah Jazz, serving as the family’s representative to the NBA. Shortly before Larry Miller’s death in 2009, he gave Greg the job.

“I love basketball and I love being a part of the NBA family,” Greg says. “That’s a big treat. There are only 30 governors in the world. And along with that, you meet with several of the key league executives.”

Larry didn’t care for the meetings of team representatives. Before Greg’s appointment, Larry often sent alternate governors. Greg found that the Jazz received more benefits and credibility once a family owner started attending.
He took his position further by serving on league committees, including the collective bargaining team. Service on the board and the committees can add up to 10 meetings a year.

“We’re the smallest-market team,” Greg says. “So when I’m there, the small markets can be heard.”

So when is the trophy coming to Utah?

“If I could give you a solid answer on that question, I would make a lot of people happy,” Greg says. “There’s been a three- or four-year upward trajectory of wins.”

The team has gotten close to the championship, losing the finals in 1997 and 1998 to the Michael Jordan-led Chicago Bulls. “Those were fun years,” Gail says.

“We’ve got a great team, with a rookie that might take us there,” Gail says, referring to guard Donovan Mitchell, a rookie in the 2017-18 season. “It takes a while to build a good team, slow and steady.”

Greg says the plan for the team is to stick with what works and he’s pleased with the roster, how the team gets along and how the players represent the family.

“The plan is to build on that moving forward,” he says. “Everybody would like to win a championship, but there’s only one out there.”

The team has become so important to Utah that the Millers wanted to be sure the Jazz stayed put long after foreseeable generations. The family announced in 2017 that the team would be placed in a legacy trust to keep the team in Utah.

The Miller family will administer the trust, but they will see no profit from the team or the arena. All profits will go back into the trust to sustain the operation, possibly for centuries. The trust will hold off any possible sale that would take the team out of Utah.