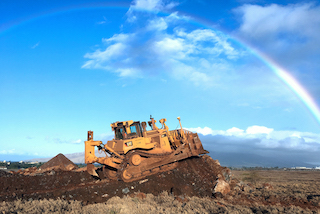 Chad Goodfellow is the CEO of Goodfellow Bros., a 100-year-old, family-owned construction company. The company is based in Wenatchee, Wash., but he is located in Kihei, Hawaii. We had a chance to chat for an upcoming article. I went into the conversation annoyed by the idea that someone actually lives in Hawaii when it’s snowing outside my office and hovering around the freezing mark. Also, Goodfellow, the name. It sounds so... Martin Scorsese.

Chad is a soft-spoken fourth-generation Goodfellow, leading 1,155 employees across the United States. He is not at all a Scorsese character – quite the opposite. He is also a masterful storyteller who takes pride in his family’s history and is humbled by its successes. “It is truly humbling to be the steward of this company and this legacy. With that comes a great deal of responsibility,” says Chad.

Goodfellow Bros. builds big things — stadiums, communities, solar farms, highways and infrastructure. These projects require the tandem choreography of civil engineering and skilled employees. “People are the center of everything we do. We want people to work for something they believe in. We want to give them purpose. And, frankly, our people give us purpose, too,” Chad explains. “It’s part of our legacy: people first.”

Relationship building is a key waypoint on the Goodfellow roadmap to the “people first” philosophy. “Everything we do is based on relationships — inside our business and outside of our business. Trust is the cornerstone to all those relationships,” Chad says. “We want to empower our people to problem solve [and] create new opportunities for the business. We break down barriers that impede that progress. We encourage entrepreneurial thinking as a fundamental part of our culture.”

Relationships, according to Chad, drive opportunities, and trust is at the heart of Goodfellow’s relationships. “Our business is one of trust. It is a core value and one that we have never wavered from in 100 years of doing business. Four generations ago, this business began on the basis of trust — and always doing the right thing.”

Chad keeps himself and his company grounded by referring to a quote from his grandfather: “You can’t make money on every deal, but you can always make a friend.”

And so began our conversation about the centennial celebration of this family’s business. Eventually I forgave Chad for living in Hawaii. He really can’t help it. And as for the Scorsese-sounding company name? “We are the opposite of a Scorsese film. We’re just a humble company building things with the best people in the greatest country in the world.”

Look for the full interview in the May/June issue of Family Business Magazine, in which Chad offers his top 25 tips for running a successful family business.