Build a family 'social contract' that will strengthen succession

Walking into Newbury Corp.’s headquarters for the first time, we were taken aback by the three-story-high painting of the founder that dominated the entry atrium. We had been invited by the current leadership team — a combination of next-generation family leaders and non-family executives — to help build a strategy for the future of the company. (“Newbury Corp.” is a fictional name of a real company, changed to protect confidentiality.) We had been told that the founder would not be participating in the process, given his stated interest in “leaving leadership in the hands of the next generation.” However, he still was active in the business and showed up at the office most days.

Immediately, we suspected there was work to do on the likely gap between stated aspirations and reality if this 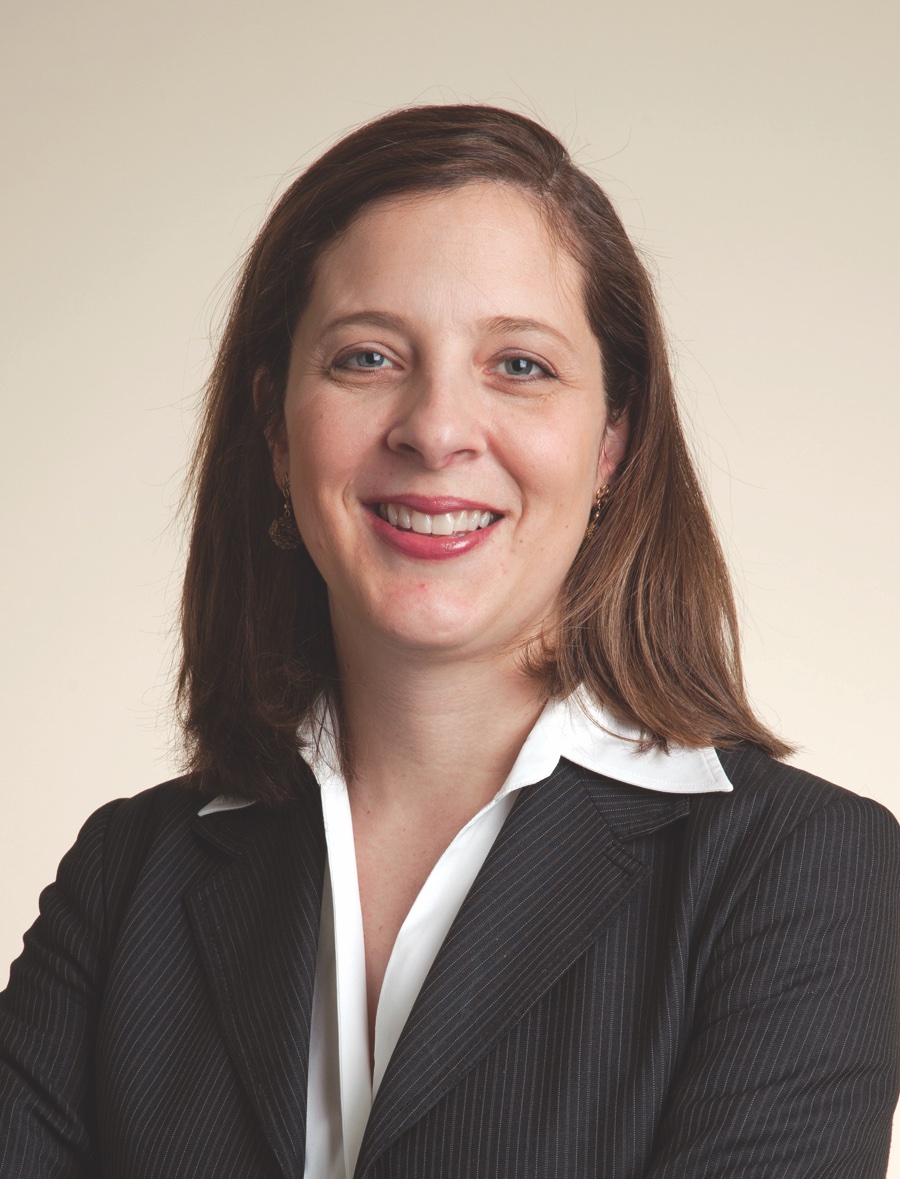 strategy process was going to succeed. The music (showing up every day, asking questions, offering “another opinion”) didn’t match the words (wanting to empower the next generation to take up leadership), and the portrait was important data.

Our team had seen such mismatches in other family businesses. Unwritten rules about culture, participation and decision making influenced work on strategy. The NextGen saw the pattern, chalked it up to “the way it is” and plowed ahead anyway, though change would be an uphill climb.

Tacit agreements
Families, and their businesses, operate under a complex set of rules — some written down and explicit, but many not. Clues to these rules can be found in artifacts around the office, how people interact within the family and business systems, and the stories passed down through the generations. As illustrated in the true story above, there are signs (sometimes not so subtle!) of the agreements that govern not only decisions, but also behaviors and norms that greatly influence what’s possible. In this example, one might hypothesize that the founder still has a strong voice, that those around him are expected to be deferential, that the team still has much of their own identity tied to the founder’s, that a focus on the founder’s behavior makes a focus on their own less urgent, etc. These clues point to the culture in place — how members of the family and business make sense of the world — and the social contract that dictates the rules of engagement within the culture.

Culture shapes what it means to be part of a family. It guides — often by assumption —use of language (not just choice of words but also what they mean), norms, belief systems and behaviors. This is the social contract. It is social because it is grounded in relationships and reinforced by modes of interaction. It is a contract because it lives in the world of “gives” and “gets” and has consequences attached. The social contract in families guides what gets discussed or not discussed, what choices are supported or not and what is expected of individual members or groups. It has a powerful influence on how people choose to engage.

The “social contract” concept is not new; early thinkers such as Hobbes, Locke and Rousseau wrote extensively on the topic. Their work focused on the relationship between governments and their constituents. The application of this idea to families underscores what makes continuity across generations possible. Surfacing and discussing these often-tacit expectations at key transition points can renew a powerful and important connection to a collective through discovery, discussion, negotiation and shared agreements about what will be most important for the future.

Time for a change
Implicit social contracts — expectations about who gets to participate, where people live, who really makes decisions — are in place for reasons that made sense at the time they took shape. These are the rules that have gotten a family 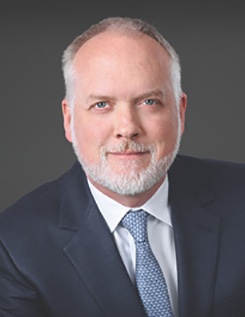 to the point where transition is on the table. Yet as families and their enterprises grow and change, new agreements are often needed to let in fresh ideas and adaptations that may be vital to keeping family members engaged and businesses successful. Rewriting the social contract in any meaningful way can be difficult. But when family members stop accepting the existing social contract (or when they opt out of it), things can unravel quickly. For this reason, creating a process to make the social contract explicit and reshape it together is a key to continuity.

Sounds reasonable, right? So why does the idea of raising questions about current rules and norms want to make you run for the hills? It’s probably because perceived “violation” of the rules feels risky, and we imagine that conversations about revisiting longstanding expectations will bring anger or disappointment. This apprehension often leads to a lack of dialogue, even if that’s what is most needed.

How can families begin exploring this topic, particularly when they have various components of governance either in place or in development?

It starts with some bravery — and some acknowledgment that all is not working smoothly. Bring up specific examples of someone bumping into a roadblock. Perhaps a non-employed family member innocently stopped by to use Dad’s part-time office space for a conference call, inadvertently upsetting their employed siblings and raising questions about their motivations. Or maybe a family member posted something on social media that others disagree with. Has the social contract been broken in some fundamental way through this small, seemingly inconsequential decision? It’s crucial to approach the topic from a standpoint of curiosity instead of frustration or anger.

Then, set the conditions for a dialogue that enables experimentation and learning, even if it feels challenging. We have found that setting ground rules to guide how this topic is discussed is a key first step. Remember, the current social contract exists because it has worked well enough for long enough that people have accepted it, and it’s invisible. The topic can be very emotionally charged, as people are accustomed to doing things in a certain way without always considering the reasons why. The goal of the family, therefore, is not to poke holes in the way things were or currently are. Instead, the focus should be on what has changed — in the family, company, economy, government, etc. — and how it challenges the accepted norms. For example, if geography has played a large role in a family’s decision making around employment, but now 95% of the family live in different parts of the world, what needs to change in the family social contract, especially if family involvement in the business is an aspiration? Is physical proximity necessary?

Once rules are established for how the social contract is discussed, creating a forum for openly discussing the aspects of the social contract is the next step. Families should invite a broad, representative group to the table, potentially including spouses and NextGen family members, and come prepared to explore topics such as:

• Rules and norms that were created over time implicitly and put into action. You can tell it is a norm or a rule when someone in the family — sometimes a NextGen or a married-in just learning the rules of the road — bumps up against it and comes to understand some boundary has been crossed. The questions relevant for different families will vary, but might include things like: Who gets to participate in what? How does compensation get determined? What gets invested in? How does the family handle wealth transfer?

• Agreements that made sense at one stage of the family’s lifecycle may or may not “fit” a later stage, and it is important to ask why. How might current agreements be advancing current goals or setting them back?

• Values should be made explicit, What is most important to preserve and why? It could be that there is a new application of an important goal or aspect of family identity. Discuss how to apply it today.

• Assumptions about “how we do things around here” — what still serves the business and the family, and what gets in the way of a future together? What may be assumed and acted on but not actually tested or accurate?

Finally, the family must link any new agreements to both current and future initiatives. Some items may feel mundane, like adjusting expectations for when someone needs to be in the office. Others may feel tactical, like communicating a new process for selecting recipients for charitable donations. And some may feel monumental, like determining the resources to invest in the business versus providing near-term liquidity to shareholders, or shifting the strategic direction of a foundation or investment fund to act on the passions of upcoming generations. But aligning under an explicit, documented social contract will pay dividends to the family.

The truth is that once this initial attempt at codifying the social contract is completed, it immediately begins to age. But this is OK. It is the ongoing, complex “social” work of the family that makes a good “contract” possible. The work on it continues through time — as new members enter the family through birth or marriage, as family members exit the business, as new challenges arise in the market. The need to make the social contract explicit and regularly reexamine it must become a core focus of your family governance structures. 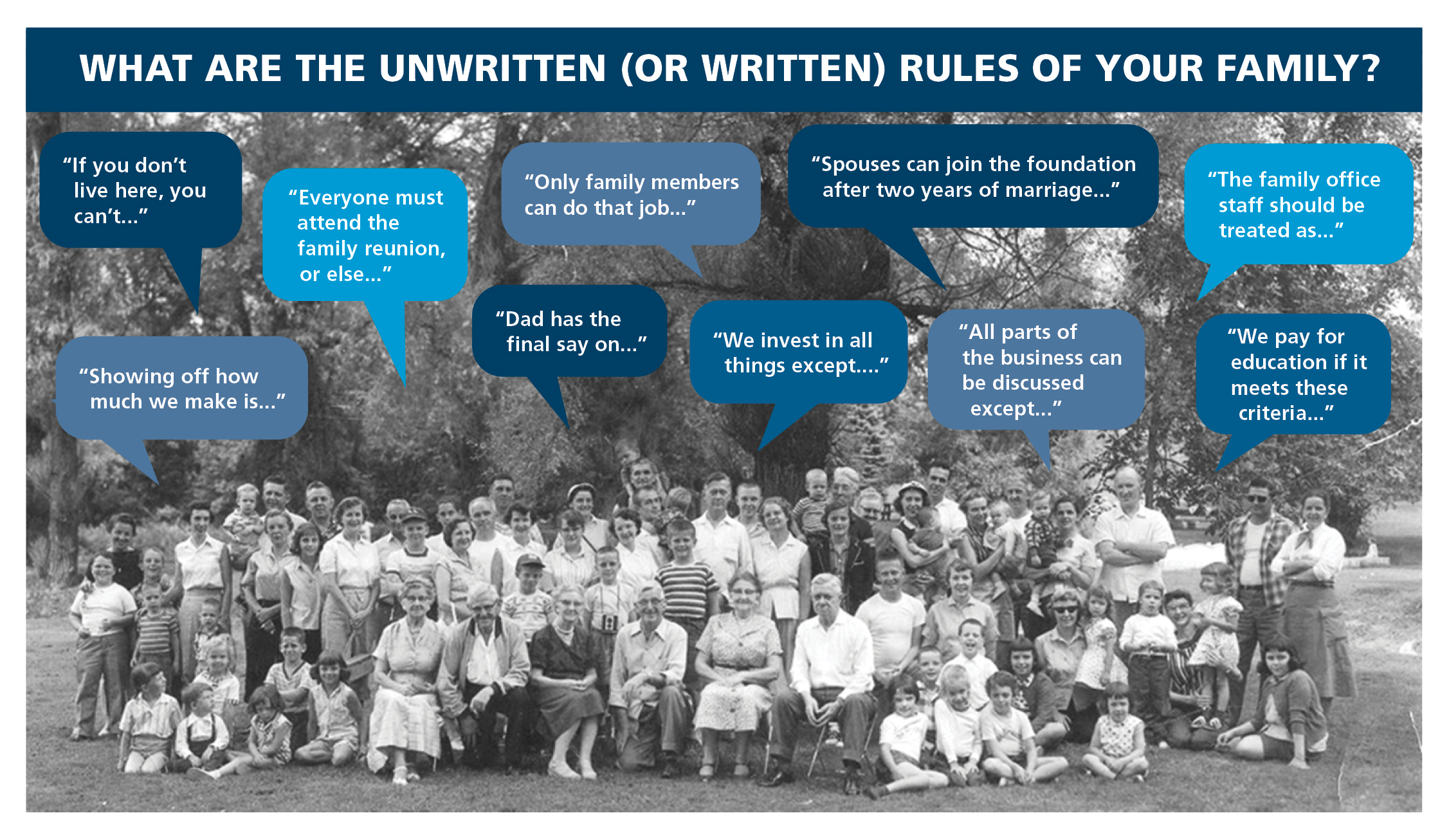 Back at Newbury Corp., the strategy work has taken shape powerfully, with innovative and rigorous strategic shifts to keep the business vital, solid financial targets and a clear execution plan. Perhaps more important, the process prompted a discussion about the social contract among the family. They agreed on new decision-making rules that clarified expectations and authority in the next generation and created a cross-generational brain trust charged explicitly with vetting new strategic ideas and exploring their connection to family goals and values.

A few months into the new strategy, we entered Newbury’s headquarters to find another new development: The portrait in the atrium had been replaced with a photo from the family’s most recent gathering — four generations together in a large frame.

Debbie Bing is president and principal and Todd Smith is a principal at CFAR (www.cfar.com).

Copyright 2021 by Family Business Magazine. This article may not be posted online or reproduced in any form, including photocopy, without permission from the publisher. For reprint information, contact bwenger@familybusinessmagazine.com.