Founder Mark Baiada is in the midst of transforming Bayada, his home healthcare company, to operate as a charitable entity rather than to enrich his family.

When J. Mark Baiada turned 70 in 2016, he had more to celebrate than just a big birthday. Bayada Home Health Care, the business he had founded in 1975, was generating more than $1 billion in annual revenues. The Moorestown, N.J., company had become the U.S.’s 10th-largest home health agency, with 310 offices in 22 states and 23,000 employees serving 150,000 patients.

Two months before Mark Baiada’s milestone birthday, he announced a plan to restructure his family-owned company into a non-profit organization. Mark would become chairman of the charitable entity. His son, David, would serve as CEO of the business.

The goal of the change in status is stewardship of the legacy, Mark and David Baiada say.

“This is converting personal wealth for the benefit of home healthcare,” Mark says. He notes as the owner of a billion-dollar company, he’s saved plenty for his retirement. “I don’t need an airplane,” he says.

The goal is that Bayada will still be operating in 100 years, maintaining the company’s high standards via a governance board and ensuring that the company will not be sold if the third or fourth generation lacks the same passion that Mark and his children have for the business.

“I wouldn’t really think of this as philanthropy,” David says. “This is about the conversion of ownership.”

“We want to lock down continuity and the long-term vision,” Mark says. The goals are threefold: “to serve millions worldwide, leave a lasting legacy and be the world’s most passionate and trusted team.”

The original plan was to transfer 80% of the business ownership to the non-profit and distribute the remaining 20% among family and employees. “But then some people might wonder, ‘What’s the angle?’ So we decided to go straight non-profit,” Mark says.

The process started more than 10 years ago when family and company officials sat down with a consultant to write “The Bayada Way,” a document outlining the company’s mission, vision, beliefs and values.

As Mark approached retirement, he thought about the best way to perpetuate “The Bayada Way.”

“I looked to the lasting legacy — the best chance of the company lasting 100 years,” he recalls. “I could give it to the kids; I could sell it. Once you [sell it], you will lose control. If it goes public, then you’re under the scrutiny of Wall Street.”

Mark’s daughters Kelli Marans (chief compliance officer) and Janice Lovequist (headquarters manager) also work at Bayada. Another daughter, Jackie Kirchhoff, previously worked there but has taken time off to raise her family. A fourth daughter, Christin Gregory, works outside the family business. Mark’s wife, Ann, retired from the company but still works on some Bayada initiatives. There are 11 grandchildren. 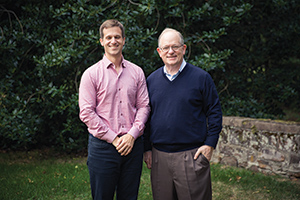 So while the family has a deep bench of potential successors, and Mark says his children are doing a great job at the company, he is looking farther into the future, focusing on that century mark. He says he’s concerned some future generation might end up in a disagreement, become greedy or perhaps simply be unable to run the business successfully.

“My first thought was, ‘Wow this is a complicated undertaking, and the implications of our decisions carry a lot of weight and are irreversible,’” David says. “At the same time, the challenge and the nobleness of the intent are energizing and inspirational.”

But, David adds, it was natural to consider the implications of the transition on the family’s wealth. Family members talked it through, and now everyone is on the same page. “Candidly, in the beginning, [going non-profit] was an effort that had no predetermined outcome or solution,” David says. “This was a blank slate.”

It was truly a blank slate in that very few private companies have transitioned to become non-profit. Bayada tested the concept in Hawaii, where the company has been operating as a non-profit under section 501(c)(3) of the Internal Revenue Code for two years. The family is now ready to make the change nationwide. The transformation is expected to be finalized in April. The name of the non-profit entity will simply be Bayada.

The process has not been easy, the Baiadas say. Taxes will be owed on company receivables transferred to the non-profit entity, which affects cash flow. Then there’s the paperwork. Then more regulations to meet.

“I thought it would be, ‘You’re giving away your business, isn’t that nice?’ But it’s not. It’s a lot of work,” Mark says with a laugh.

The Baiadas have also been vigilant to ensure that clients and employees are in no way affected by the transition, and they’ve kept the stakeholders up to date every step of the way. They say employee satisfaction has gone up since the announcement.

“I think people are proud to be part of an institution that puts mission over money, doubling down on serving more people in more places at a high standard for a very long time,” David says.

Tag: Beyond the Bottom Line