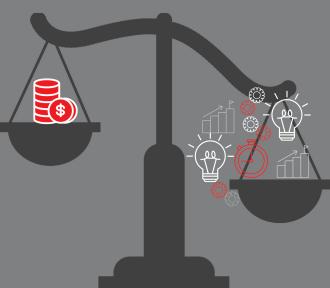 To demonstrate how companies can apply the survey results, we present a hypothetical case study of ACME Holding Company and Jane Smith, the company’s chief executive officer and a third-generation shareholder of the family business. Smith and ACME’s compensation committee are in the process of determining the appropriate pay levels and mix between base salary and incentives for the company’s executives.

In our case study, Smith has presided over ACME Holding Company for more than 10 years. While the company has grown steadily, executive pay has remained relatively flat. What is the appropriate level of executive pay, given the company’s size? The survey shows that a correlation exists between company size and levels of pay. As a company’s revenue increases, the complexity of operations and the responsibilities of the executives also increase, necessitating higher pay to attract and retain talent. Median chief executive officer total direct compensation (the sum of salary, short-term incentives and long-term incentives) is $425,000 for the entire survey population of family businesses. For companies with revenue below $10 million, median CEO total direct compensation is $200,000. That figure  increases to $1 million for companies with revenue greater than $500 million.

Smith, who is both a family member and CEO, is typical of the survey participants. Most respondents indicated that the top positions of CEO and president were held by family members. In contrast, specialized functional roles tend to be held by non-family members. Not surprisingly, smaller companies, which generally rely on “sweat equity,” have greater family representation in the executive ranks than larger companies do. As companies grow, they hire talent from outside the family, particularly to gain specialized functional expertise. One surprising result is that the CEO position is held by a family member across all revenue ranges — even at companies with greater than $500 million in revenue.

At many family businesses, shareholders ask whether pay for family and non-family members is differentiated. The survey results can inform this question for the positions of president and chief operating officer (COO), where survey responses were evenly distributed between family and non-family incumbents. For the other positions, there was a predominance of either family or non-family members in the specific role, so any pay differentials could not be meaningfully measured.

In our case example, Smith is considering bringing in outside executives to assume the roles of chief financial officer and chief legal officer. Rounding out the executive team is John Doe, who is a division head and a family member. In order to recruit the outside executives, the compensation committee is considering developing short-term and long-term incentive plans. Should Smith and Doe, both family member executives, participate in these incentive plans?

According to the survey, most companies treat family and non-family members the same with respect to short-term and long-term incentives. However, the percentage of respondents offering short-term incentives to family executives is slightly higher than the percentage of those providing long-term compensation to executives who are family members. A likely reason is that family executives are often shareholders, who also participate in dividends or profit distributions and thus are rewarded for long-term value creation via their share ownership.

As the compensation committee of ACME Holding Company develops its short- and long-term incentive plans, it can turn to the survey for insights.

· A majority of companies use profitability measures to determine short-term incentive payouts. Other common metrics, in order of prevalence, are operational objectives, revenue and strategic objectives.

· The broad array of performance measures favored by family businesses indicates that they assess their performance more holistically than do their privately held and publicly traded peers, which strongly emphasize profitability and financial performance in their short-term incentive programs.

With respect to long-term incentives, half of the survey respondents offer long-term incentives to their executives. This prevalence is lower than at other privately held companies because family businesses are often reluctant to share real ownership or economic value with executives outside the family.

Other key survey findings on long-term incentives include:

· Awards are typically granted annually and have vesting or performance periods spanning three or five years.

· Without a public market to provide liquidity or a valuation for equity, private companies must decide how to provide these features in their plans. To value equity, family businesses typically use an established financial formula or rely on an outside, independent appraisal of the business.

· The companies surveyed report modest pools for the sharing of value creation relative to publicly traded peers. More than half the respondents with equity-based long-term incentive plans report pools of up to 10% of total shares outstanding.

In light of the tremendous response to the inaugural survey, CAP and MLR Media plan to conduct the second iteration of the Family Business Executive Compensation Survey in the summer and fall of 2021. In this next iteration, we will be able to evaluate trends in compensation practices and continue to provide executive compensation benchmarking data to family businesses as they transition from responding to pandemic-related disruptions to managing normal operations. To participate in the next survey and receive the full data set, please contact dshaw@familybusinessmagazine.com.